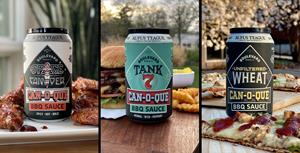 Each flavor will appear in a can designed similarly to its beer counterpart, open with the traditional pull tab and include a reusable, snap-on cap to keep leftovers fresh. However, don’t let the novelty of the can lead you to believe these are anything but truly flavorful Kansas City style sauces, each made with the care that Rufus Teague is known for.

Using different beers to create these sauces has led to the following interesting and unique flavor profiles:

Unfiltered Wheat Can-O-Que: The mildest of the three sauces and the same tried-and-true taste as the original test formula. Good depth of sweet flavor with a bit of earthiness and hint of citrus zest. (Recently awarded the American Royal’s 2nd best Specialty BBQ Sauce on the Planet)

Space Camper Can-O-Que: While not truly hot, this is the spiciest of the three recipes. The base is sweet and fruity, but the spicy boldness accentuates Space Camper’s inherent hoppy kick.

Tank 7 Can-O-Que: The rich grains, yeast and herbs that make Tank 7 such an amazing beer to pair with food are pushed even further in this sauce. Full of flavor, it features the sweet, herbal taste of cloves and a distinctive peppery punch.

The new Can-O-Que sauces will be available at retailers, grocery and liquor stores throughout Kansas City and surrounding region. They are also available for purchase online at www.rufusteague.com and may be picked up at the Boulevard Brewing Co. Gift Shop.

Boulevard Brewing Company is the largest specialty brewer in the Midwest. Their beers are available in 45 states and 11 countries. Learn more at boulevard.com, or find them on social at facebook.com/Boulevard, twitter.com/Boulevard_Beer and instagram.com/Boulevard_Beer.

Perhaps I’ve had cachete tacos in Kansas City before and not realized it. They go by a couple other names—cabeza, barbacoa. In Spanish, cachete means “beef cheeks” (one part of the cabeza) and it is … END_OF_DOCUMENT_TOKEN_TO_BE_REPLACED

Posted on January 25, 2022 City Council has approved a new pilot program allowing many Overland Park residents to raise chickens. Under the program, residents will be able to … END_OF_DOCUMENT_TOKEN_TO_BE_REPLACED

El Torreon Ballroom was born as a Jazz Age ballroom. In the seventies, the building became a counterculture hub as The Cowtown Ballroom. New owners have big plans to give it a new life. Twice in its … END_OF_DOCUMENT_TOKEN_TO_BE_REPLACED

In Kansas City Actors Theatre’s The Pests, all Eraste wants to do is meet up with his beloved. And all anybody else wants to do is detain him.  The play, which runs through January 30 at the City … END_OF_DOCUMENT_TOKEN_TO_BE_REPLACED