Inside her home studio, Colleen Coffman cradles the head of a wolfman. Gray hair flows from its pale, bony skull bearing a bloodied snarl.

The silicone mask, she says, has strong costume potential.

“They would be great to sell for haunts, they are very hearty,” she says. “They are very comfortable, and they are super realistic.”

Heads and other body parts—human, monster and otherwise—rest behind Coffman in various stages of completion. She works across Kansas City as a costume designer and makeup and special effects artist.

When the pandemic struck, it crushed all of her scheduled gigs for local film productions, events and the Kansas City Ballet.

“We’ve spent our entire lives, our school careers, our money, our time, you know, dedicated to entertainment,” Coffman says. “And then that was just ripped completely away from us with no backup. So, it’s been tough for everybody.”

After scraping by for the last year, Coffman is finally getting called back to her passions. The ballet recently enlisted her for productions of Dracula, the Wizard of Oz and the Nutcracker.

And the wolfman? That’s destined for a client attending CryptiCon KC this weekend.

The annual convention will draw a wave of horror enthusiasts, vendors and celebrities to the KCI Expo Center. Like many conventions, CryptiCon took 2020 off, dealing a tough hand to fans and the businesses that cater to them.

Now, those events, and their eager attendees, are rushing back to the Kansas City area. Also starting Friday is KantCon, a tabletop gaming convention at the Overland Park Convention Center, while Naka-Kon, KC FanCon, and Planet Comicon are hot on its heels.

Cosplayers form a huge collective of fans who attend conventions like Naka-Kan, Planet ComicCon and CryptiCon which begins Friday night at KCI Expo Center. Most cosplayers build their own costumes and props spending months or years preparing for a convention.

“It’s very important to me that this, this convention circuit comes back,” says Chris Jackson, the sole proprietor of Planet Comicon. “I think that the general mood of the public is not to move backwards.”

He’s planning to return in August with his comic book and pop culture convention, which draws upwards of 60,000 people every year.

When events like his were cancelled or moved online, Jackson says that fans across the region lost precious opportunities to be with their kind. That’s not to mention the lost sales for local hotels, restaurants and creators—a big revenue hit for Kansas City.

“So it’s not just me. Many people have been devastated,” Jackson says. “Some were able to transition to online sales and do very well, but not all.”

According to Visit KC, last year’s Planet Comicon alone would have brought nearly $10 million in spending to the city. The Overland Park Convention Center estimates it lost around $9 million in revenue from canceled or re-scheduled events.

“So there’s a whole series that it’s just a ripple effect of money, of incomes being lost, and lives being hurt by these shows not going forward,” Jackson says. 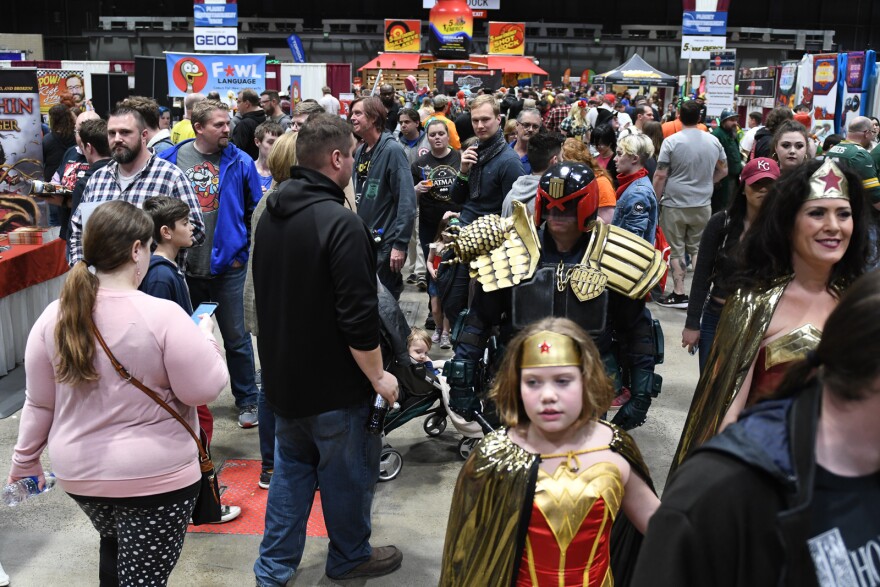 Costumed fans mingle with the rest of attendees at Planet ComicCon in 2019. The owner of Planet ComicCon, Chris Jackson, says he’s determined to move forward this year with the event which draws as many as 60,000 people to Bartle Hall.

U.S. Toy in Overland Park is one of them. They supply wigs, makeup and props for cosplayers at conventions like Planet ComicCon, and often set up costume repair booths at conventions. Leatha LaGuardia says that 2020 was a total bust; even Halloween proved disappointing.

LaGuardia says that cosplayers have been especially anxious to get back to the convention circuit. With all that down time, some made two or even more outfits to show off.

“I mean, we all open up, you know, when we’re in costume and when we’re identifying with a specific character and we’ve worked so hard and we have such a passion for what we do,” she says. 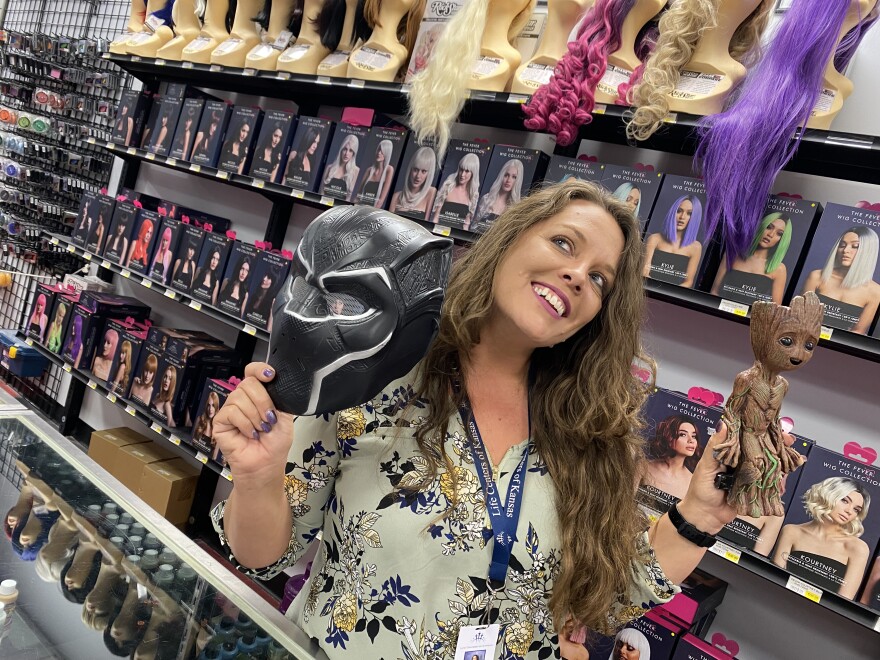 Leatha LaGuardia at US Toys in Overland Park supplies a lot of cosplayers and pop-culture fans with the props, makeup and other supplies they might need for conventions and events.

Dennis Butt is running the costume contest at CryptiCon this weekend. And he spends a lot of time building elaborate props for himself too—he and a close friend are busy finishing a 7.5-foot Lycan statue from the Underworld movies.

For Planet ComicCon next month, Butt will debut a new costume of the Predator, the iconic alien from the Arnold Schwarzenegger movie. Once Butt squeezes into it, his Predator measures nearly 7 feet tall, and will switch between two different masks as he prowls through exhibit halls.

“Being able to make something you can’t buy. That’s one of the things I like about ComicCon,” he says. “For me, it’s just fun geekin’ out.”

Even beyond the chance to exhibit off his creations, Butt says it’s the camaraderie and connections that bring him back to conventions every year. Online is just not the same.

“If you’re standing in line for something and you can’t strike up a conversation about something at an event like that, then you’re not doing it right,” Butt says.

CryptiCon KC runs at the KCI Expo Center, and KantCon at the Overland Park Convention Center, from July 16-18.

February is short but sweet. This month, we share our picks for the city’s best bonbons and a lot of other unique sweets that are baked, dipped and drizzled to perfection. By Dawnya Bartsch, Martin … END_OF_DOCUMENT_TOKEN_TO_BE_REPLACED

Photo by Caleb Condit and Rebecca Norden It’s Valentine’s Day month, but fancy chocolate deserves to be enjoyed year-round. We visited chocolatiers around the … END_OF_DOCUMENT_TOKEN_TO_BE_REPLACED

Posted on December 1, 2022 Overland Park now has more access to information about its Police Department than ever, thanks to a library of online transparency-focused … END_OF_DOCUMENT_TOKEN_TO_BE_REPLACED

The annual Beard Awards semifinalists nominations were just released and Kansas City’s food and drink scene has something to celebrate. The KC area has seven semifinalists by our count, including two … END_OF_DOCUMENT_TOKEN_TO_BE_REPLACED