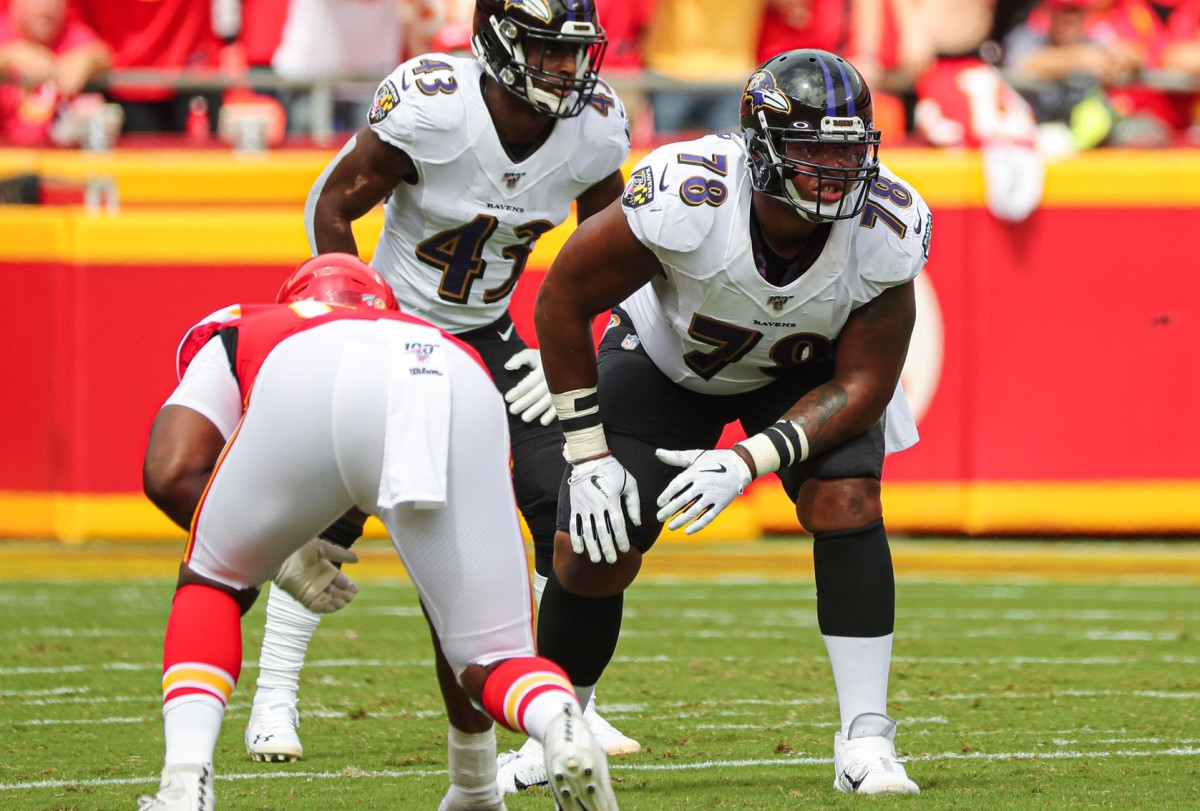 In an offseason largely devoted to an overhauling of their offensive line, the Kansas City Chiefs now have a new tackle to protect Patrick Mahomes in 2021, trading for Baltimore Ravens tackle Orlando Brown.

The deal had been in the works for a while according to Ian Rapoport of NFL Network. He tweeted that the sides went back and forth on a deal that “equals out to a bit more than a second-rounder — essentially pick No. 45 when you combine it all.”

One of the other factors playing into the deal for Brown is his impending contract. Currently, the 6-foot-8, 344-pound tackle is in the final year of his rookie deal.

NFL Network’s Mike Garafolo reports the plan is for Brown to play this season without a new contract and says “there’s no extension as part of this deal right now.”

With that, Garafolo also said Brown becomes an eligible franchise tag candidate for the Chiefs next season.

This move comes shortly before the NFL Draft but long after the Chiefs were reportedly battling with the San Francisco 49ers for the services of Trent Williams, who ultimately re-signed with San Francisco.

Jeremy Fowler of ESPN tweeted that the Chiefs “were incredibly close in the early hours of the morning. Nearly got it done, even at those massive numbers. Niners put it over the top.”

Before trading for Brown, the Chiefs had an obvious void at left tackle, with Martinas Rankin and Yasir Durant at the top of the depth chart.

Up to this point in the offseason, the Chiefs had primarily invested at the guard positions, highlighted by former New England Patriots guard Joe Thuney, who KC made the highest-paid guard in NFL history as their first major move of free agency.

The Chiefs also added three-time Pro-Bowler Kyle Long, who is returning from a one-year retirement. Long seems most likely to compete with fellow guard Laurent Duvernay-Tardif for the right guard spot, assuming Duvernay-Tardif returns for 2021 after opting out in 2020. Kansas City also tendered guard Andrew Wylie, who may end up being the Chiefs’ fourth or fifth guard alongside third-year player Nick Allegretti.

The Chiefs’ lone move at tackle was to bring back tackle Mike Remmers, who filled various roles before settling at right tackle for the majority of 2020. Despite some mixed messaging at the time of the signing, it now seems clear that Remmers will compete with redshirt rookie Lucas Niang at right tackle, with the loser of the battle becoming the Chiefs’ swing-tackle for 2021.

Next year Worlds of Fun will reach fifty years of business, and to celebrate it is bringing back one of its most legendary roller coasters: the Zambezi Zinger. At the time of Worlds of Fun’s opening … END_OF_DOCUMENT_TOKEN_TO_BE_REPLACED

Standing in the same location since 1857, the City Market is nearly as old as Kansas City itself. In the 1850s, over three hundred steamboats traveled on the Missouri River—including the Arabia before … END_OF_DOCUMENT_TOKEN_TO_BE_REPLACED

At 6 p.m. this Friday at the Kauffman Center, TEDxKC will have a lineup of ten speakers whose expertise range from a sky full of stars to the key to happiness to a MacArthur Genius. The theme is … END_OF_DOCUMENT_TOKEN_TO_BE_REPLACED

Mesoamericans called it food of the gods. From central Mexico down to Honduras, where the cacao tree grows native, ancient Olmecs, Mayans and Aztecs would gather the oblong fruit and break open its … END_OF_DOCUMENT_TOKEN_TO_BE_REPLACED

The definition of “comfort food” tends to vary depending on who you ask. At two new Brookside restaurants, Brady & Fox and Earl’s Premier, the term applies both to time-honored Irish recipes and East … END_OF_DOCUMENT_TOKEN_TO_BE_REPLACED