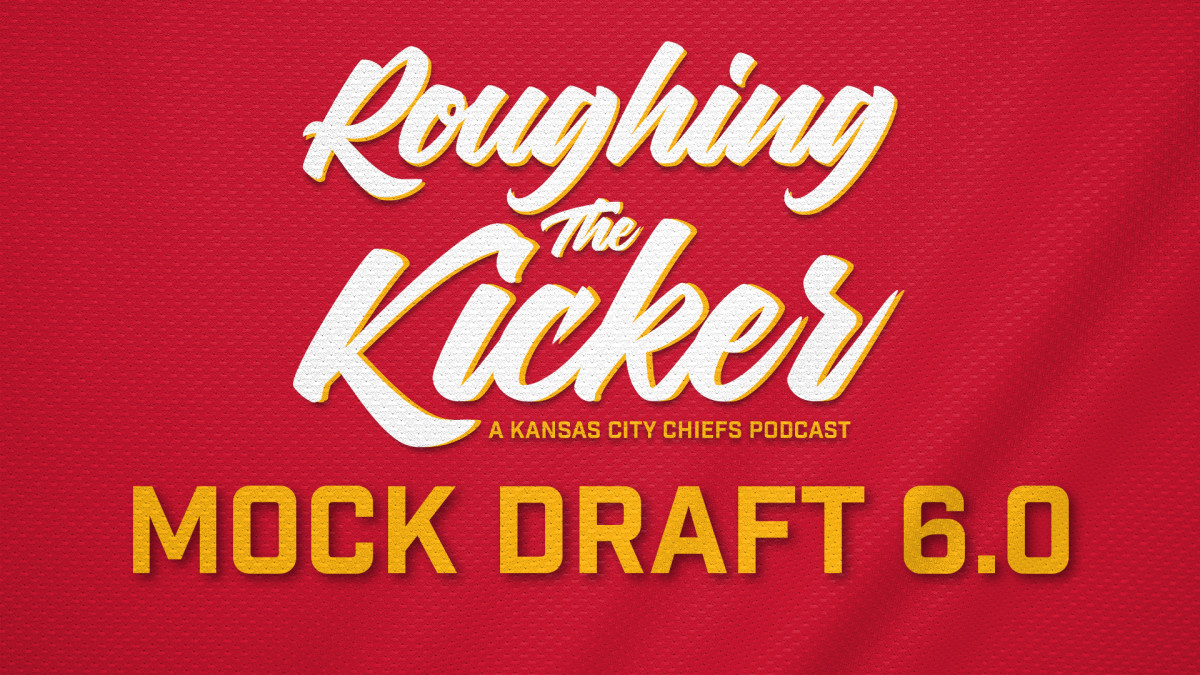 We may be in the heart of free agency, but there’s no better time to do a mock draft. The Kansas City Chiefs’ offseason plan is starting to become clearer and we take advantage of that on this week’s Roughing the Kicker Kansas City Chiefs Mock Draft 6.0.

As always, Arrowhead Report draft analyst Jordan Foote joined me as we created and broke down the mock on today’s episode.

For our mock draft, we partnered with NFL Mock Draft Database and its 2021 mock draft simulator. As for draft settings, we used the recommended realistic setting with strict trading.

With the clearest idea — so far — of what the Chiefs’ plan is, here’s our latest 2021 Roughing the Kicker Chiefs mock draft. For more in-depth thought processes on the picks, go listen to the podcast where we give a comprehensive breakdown of each selection.

With the Chiefs’ latest move for guard Joe Thuney, Kansas City can afford to take and start a rookie center and feel confident in it. With the veteran presence of both Thuney and Laurent Duvernay-Tardif beside him, Creed Humphrey will be in good hands in his first season. Humphrey had an impressive Pro Day, putting up insane numbers in the vertical, 40-yard dash and bench press. The selection wouldn’t be met with much criticism as the Chiefs will have their anchor of the future with this selection.

The free-agent market for wide receivers has been slower than anticipated, which can mean there’s lots of confidence in this draft class. Amon-Ra St. Brown is a guy to be confident in. St. Brown played typically from the slot at USC. His ability to catch a contested ball is a trait to get Chiefs Kingdom excited. He can excel at each level and has appealing potential. If Kansas City elects to forgo the free-agent market, St. Brown would be a wonderful option.

Finding premier EDGE talent will be tough if the Chiefs choose to stick with offensive line in the first round but Rashad Weaver could provide Kansas City with a solid two-down EDGE rusher. Weaver is a high-upside pick and fits defensive coordinator Steve Spagnuolo’s mold at EDGE. Weaver is no stranger to playing second-fiddle, as he did so with Patrick Jones II this season and thrived. Having Weaver as a two-down EDGE could be a step in the right direction in securing the end opposite of Frank Clark.

Pete Werner is a guy we’ve had our eyes on for a while. As a mid-round pick, Werner can afford to spend time on the bench and learn the system from Spagnuolo. He’s shown the ability in college to take on bigger and bigger roles and I expect him to be able to do the same at the next level.

Versatility is the name of Trill Williams’s game. While his strongest position is outside corner, Williams’s ability to play either safety or cornerback would likely land him a spot on Spagnuolo’s defense. Williams could start right away pending the free agency conversations with Charvarius Ward and Bashaud Breeland. If the team is left without one or either of their outside corners, Williams would be a great start to fill those roles.

With Derrick Nnadi entering the final year of his rookie deal, snagging Khyiris Tonga in the fifth round would be a great pick for the Chiefs. Tonga’s impact could be felt right away in the interior defensive line rotation. Hiss run-stopping and gap-filling ability would be a great natural replacement for Nnadi if he doesn’t return after this season.

While it’s not likely Kansas City doubles up at a position, the depth of the wide receiver class deserves to be looked at in the later rounds as well. Ihmir Smith-Marsette is a dynamic player. He could also be a solid NFL return man as he brings a strong track and field background to the field. When it comes to offense, Smith-Marsette can be used in the short game and is the best when he gets the ball in space.

With the compensatory picks now added to the simulator, the bottom of the draft is slim pickings. Choosing to wait on offensive line depth until this slot could be a mistake but Landon Young could provide that and more for the Chiefs offensive line. Young is a 6-foot-7, 321-pound tackle that has a frame Andy Heck will be able to build on.

You can watch the full mock draft with commentary from me and Jordan on the Roughing the Kicker YouTube page, or you can watch it below.

The pandemic threw a wrench in many people’s holiday shopping. What used to be trips to stores and markets with the family to find the perfect gift turned into Amazon wish lists and online gift cards. … END_OF_DOCUMENT_TOKEN_TO_BE_REPLACED

Rhonda LeValdo travels from Lawrence to Kansas City for every Chiefs home game, but she’s never actually been inside Arrowhead Stadium. Instead, she stands by a bus stop at the corner of Red Coat Lane … END_OF_DOCUMENT_TOKEN_TO_BE_REPLACED

For eighty years, a story has remained buried under the tales of the great men of Kansas City jazz, from Count Basie to Charlie Parker. Living and playing alongside them was another legend, pianist … END_OF_DOCUMENT_TOKEN_TO_BE_REPLACED