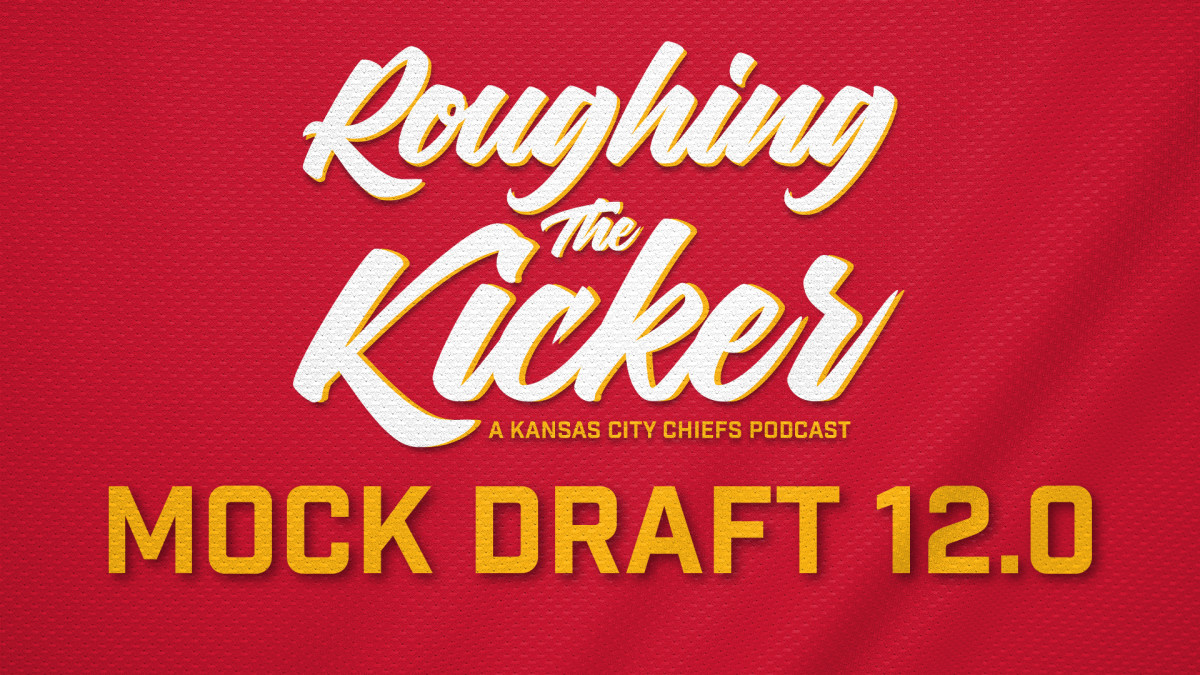 A lot has happened in between our last mock draft and now but with tomorrow being the first-round 2021 NFL Draft, it’s time for the 12th and final edition of Roughing the Kicker’s Kansas City Chiefs seven-round mock draft.

Arrowhead Report draft analyst Jordan Foote joined me as we created and broke down the mock on today’s episode.

For our final mock, we took our chances with another aggressive mode draft to best-simulate a draft that could have some uncertainty.

As another added wrinkle to the draft, we decided to take the top five players off of the board for each selection to make the board more realistic while still having some randomness.

A big thanks goes out to Denny at NFL Mock Draft Database who has partnered with us through the pre-draft process to create our mock drafts.

For more in-depth thought processes on the picks, go listen to the podcast where we give a comprehensive breakdown of each selection.

With the Chiefs now having an extra second-round pick, it’s crucial they take a wide receiver. It’s arguably their biggest positional need now with the hole at left tackle filled by Orlando Brown Jr. Finding a wide receiver for the long term is important. UNC’s Dyami Brown is just that. While on the surface, Dyami Brown looks like he’s just a deep threat, he’s much more than that. Brown recorded a Relative Athletic Score of 8.38 out of 10 and showcased that he is an elite athlete. With his athletic ability, Dyami could see the field in Week 1 and have his role and playing time build from there if he continues to develop a shallow and intermediate route tree.

In last week’s mock draft, Houston’s Payton Turner was selected at this very spot and it’s hard to stray away from him. Turner could possibly be off the board by Kansas City’s selection here and I wouldn’t be surprised. He checks all of defensive coordinator Steve Spagnuolo’s boxes for an edge rusher and is a guy that has the potential to eventually play every down. While I don’t think Turner’s role will be that at the beginning of this year, he gives the rotation opposite of Frank Clark some important talent and youth it hasn’t had in years.

After a long layoff of picks, David Moore just makes sense for Kansas City. He’s another box-checker, as Moore was a stand-out participant in this year’s Senior Bowl and he’s from a small school. When it comes to the late rounds of the draft, Veach likes to nab small-school guys who can make a big impact. Moore has the ability to play guard and center. His selection will bring some depth stability to the interior of the offensive line if injuries do wear on the unit like they did last season.

Rachad Wildgoose is another selection from last week’s draft. While Wildgoose played in both the slot and on the outside at Wisconsin, his best fit at the next level is on the inside. With that, the Chiefs can easily fill the vacancy left by Bashaud Breeland by moving L’Jarius Sneed to the outside and rolling with a four-corner set of Sneed, Wildgoose, Rashad Fenton and Charvarius Ward.

This is another depth/foresight selection. Kansas City only signed Daniel Sorensen to a one-year contract back in March, so they will need other options in the future. Whether it’s Armani Watts or Tariq Thompson, there will need to be a new third safety after Sorensen’s departure. Thompson has showcased the versatility Spagnuolo and Veach like in the secondary. He might not see a ton of playing time this season but could add crucial depth while learning the defense this season.

The Chiefs need some linebacker depth and with the selection of Amen Ogbongbemiga, they would get just that. His talent is raw and what he lacks in pass coverage, he makes up in run defense. Ogbongbemiga more than likely won’t see the field right away with the linebacker snaps already being allocated to Willie Gay Jr., Anthony Hitchens and Ben Niemann, but Ogbongbemiga gives the team an out when it comes time to renew Niemann’s contract. If everything goes well in his development, Ogbongbemiga will be a solid depth player for this season.

You can watch the full mock draft with commentary from me and Jordan on the Roughing the Kicker YouTube page, or you can watch it below.

Gymnasts raised their arms and struck familiar poses — without the familiar explosion of cheers. Nothing to hear near the beach volleyball courts, either, except the piercing hiss of cicadas in … END_OF_DOCUMENT_TOKEN_TO_BE_REPLACED

Editor's note: Bill Tammeus is a former columnist for The Kansas City Star and writes columns for The Presbyterian Outlook and formerly for The National Catholic Reporter.Back in 1981, when I was a … END_OF_DOCUMENT_TOKEN_TO_BE_REPLACED

Q • My neighbor is an avid gardener and gave me a box of Epsom salt for my plants. How much do I use and what does it do for my plants?A • Epsom salt has a cult following that touts myriad benefits … END_OF_DOCUMENT_TOKEN_TO_BE_REPLACED

A summary of Iowa news from the past week Gazette Des Moines Bureau Jul. 25, 2021 6:00 am … END_OF_DOCUMENT_TOKEN_TO_BE_REPLACED