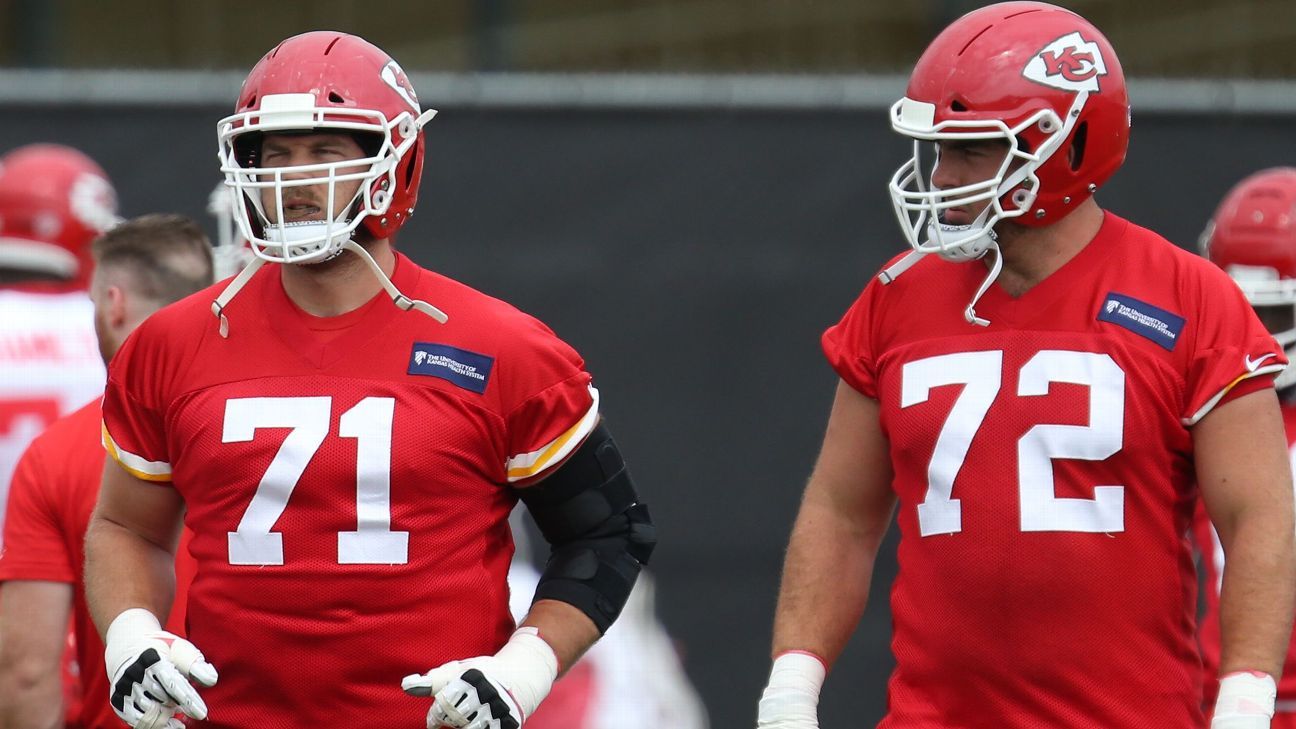 KANSAS CITY, Mo. — The Kansas City Chiefs released both of their starting offensive tackles — former No. 1 overall draft pick Eric Fisher and veteran Mitchell Schwartz — in a pair of moves that will save more than $18 million against the salary cap but leaves the reigning AFC champions looking to rebuild at key spots on the offensive line.

The Chiefs needed to clear about $20 million from their salary cap before these moves. Fisher and Schwartz have been fixtures along Kansas City’s offensive line, but neither of them played in the Chiefs’ Super Bowl loss to the Tampa Bay Buccaneers last month because of injuries.

“I have a tremendous amount of respect for both Eric and Mitchell,” Chiefs general manager Brett Veach said in a statement. “With Eric, obviously he was the very first player that we drafted when we got to Kansas City, and we were able to watch him grow into a solid tackle for us for many years. With Mitchell, his durability and toughness is remarkable and he certainly left his mark on our team. These decisions are never easy, especially with guys like these, but both of these players will forever be a part of our history.”

Fisher, 30, missed the Super Bowl after tearing an Achilles tendon in the Chiefs’ AFC Championship Game victory against the Buffalo Bills. Schwartz, 31, missed the last three months of the season with an ailing back and recently had surgery.

Fisher posted a farewell message on Instagram shortly after the Chiefs announced the moves Thursday, thanking Kansas City and writing: “All good things must come to an end.”

The Chiefs’ most obvious candidate to start at tackle next season is Lucas Niang, a third-round pick in the 2020 draft who opted out of playing last season.

“I’d like to thank Eric and Mitch for all of their contributions over the years,” Chiefs coach Andy Reid said. “Every day both of these men came to work with the right attitude, ready to grind, both on the field and in the classroom. These guys are both dirty tough, but beyond that, they’re good people and I enjoyed coaching them. I wish them the best as they continue their careers.”

Fisher was selected by the Chiefs with the first overall pick of the 2013 draft. The two-time Pro Bowler struggled early in his career, but in recent years began to live up to at least some of the potential the Chiefs saw in him.

Schwartz joined the Chiefs in 2016 as a free agent after four seasons with the Cleveland Browns. He was an All-Pro each season from 2017 through 2019 and had been durable until this past season, starting 70 consecutive games for Kansas City.

Schwartz had a streak of 7,894 consecutive offensive snaps to begin his career before briefly being knocked out of a midseason game in 2019. He started 134 consecutive games before leaving a Week 6 game this season against the Bills with the back injury.

Next year Worlds of Fun will reach fifty years of business, and to celebrate it is bringing back one of its most legendary roller coasters: the Zambezi Zinger. At the time of Worlds of Fun’s opening … END_OF_DOCUMENT_TOKEN_TO_BE_REPLACED

Standing in the same location since 1857, the City Market is nearly as old as Kansas City itself. In the 1850s, over three hundred steamboats traveled on the Missouri River—including the Arabia before … END_OF_DOCUMENT_TOKEN_TO_BE_REPLACED

At 6 p.m. this Friday at the Kauffman Center, TEDxKC will have a lineup of ten speakers whose expertise range from a sky full of stars to the key to happiness to a MacArthur Genius. The theme is … END_OF_DOCUMENT_TOKEN_TO_BE_REPLACED

Mesoamericans called it food of the gods. From central Mexico down to Honduras, where the cacao tree grows native, ancient Olmecs, Mayans and Aztecs would gather the oblong fruit and break open its … END_OF_DOCUMENT_TOKEN_TO_BE_REPLACED

The definition of “comfort food” tends to vary depending on who you ask. At two new Brookside restaurants, Brady & Fox and Earl’s Premier, the term applies both to time-honored Irish recipes and East … END_OF_DOCUMENT_TOKEN_TO_BE_REPLACED