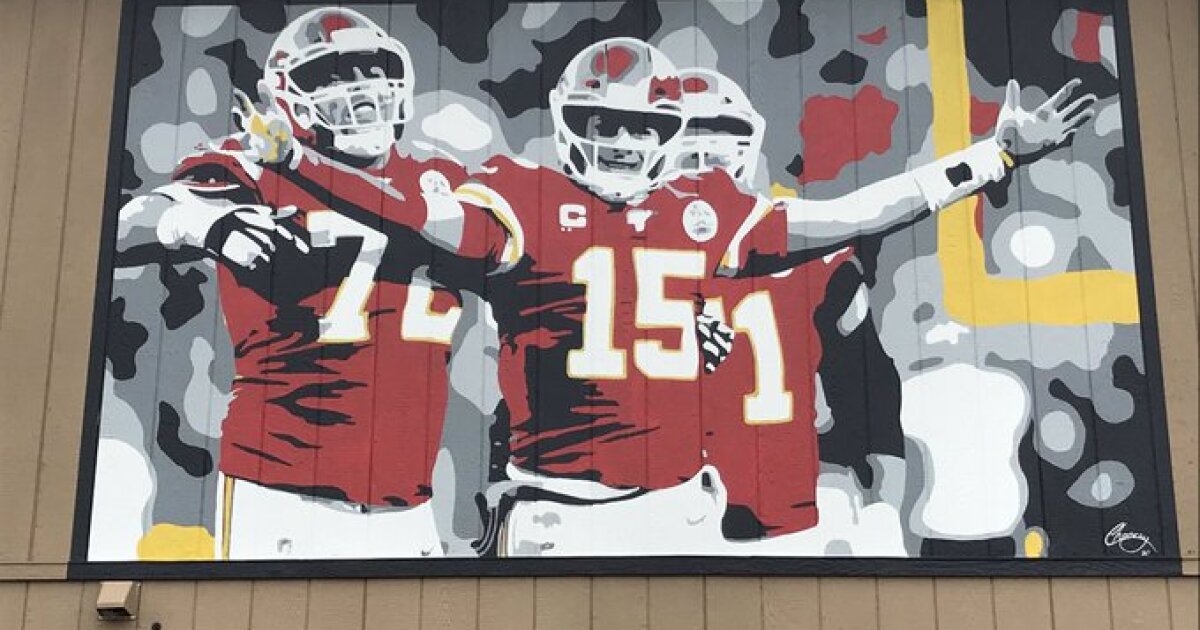 KANSAS CITY, Mo. — Chris Chancey is a huge Chiefs fan living in Kansas City, Kansas and wanted to do something to commemorate the big Super Bowl win in 2020.

So after his wife’s approval, he decided to paint a large Chiefs mural on the side of his house.

“Took me about 60 hours to complete from start to finish, labor of love, that’s what I like to do, I love to painting so I’ve been in it for a while,” Chancey said.

Now months after completion, Chancey said it’s been an attraction in the neighborhood.

“People come by still everyday and snap pictures or wave whenever I’m outside so its nice it’s brings this little community together it seems to me,” he said.

But this mural is not getting a lot of praise from the city who sent Chaney a letter asking him to remove the painting.

The city says installing an illuminated mural sign on the property in a residential district violates city codes. The city told Chaney he must take it down by the end of the month.

“It upset me, it’s disappointing when the city can tell you what to do with your own property and your own house,” Chancey said.

“I couldn’t believe it just with everything going on and I looked at it as a piece of celebration art not actually a signage or anything bad,” Chris’ wife, Christie Chancey, said.

While Chancey admits the sign was illuminated during Chiefs games, the lights have been out ever since the Superbowl in Feb.

“I think its a nice looking mural, there’s nothing wrong with it,” neighbor Tom Fortner said.

41 Action News reached out to the Unified Government and received this statement:

“Fans can all agree this Chiefs mural is awesome! Unfortunately, murals, including awesome ones like this, are not allowed in residential (R1) areas per the City’s Code of Ordinances.”

“I just assumed it was art instead of just a sign, it didn’t have any verbage on it or anything like that,” Chancey said.

He told 41 Action News he’ll comply with the order but the mural may live on.

“There’s a gentleman that’s a friend of mine who’s been teasing me about purchasing it and replacing it and fixing it all,” Chancey said.

Next year Worlds of Fun will reach fifty years of business, and to celebrate it is bringing back one of its most legendary roller coasters: the Zambezi Zinger. At the time of Worlds of Fun’s opening … END_OF_DOCUMENT_TOKEN_TO_BE_REPLACED

Standing in the same location since 1857, the City Market is nearly as old as Kansas City itself. In the 1850s, over three hundred steamboats traveled on the Missouri River—including the Arabia before … END_OF_DOCUMENT_TOKEN_TO_BE_REPLACED

At 6 p.m. this Friday at the Kauffman Center, TEDxKC will have a lineup of ten speakers whose expertise range from a sky full of stars to the key to happiness to a MacArthur Genius. The theme is … END_OF_DOCUMENT_TOKEN_TO_BE_REPLACED

Mesoamericans called it food of the gods. From central Mexico down to Honduras, where the cacao tree grows native, ancient Olmecs, Mayans and Aztecs would gather the oblong fruit and break open its … END_OF_DOCUMENT_TOKEN_TO_BE_REPLACED

The definition of “comfort food” tends to vary depending on who you ask. At two new Brookside restaurants, Brady & Fox and Earl’s Premier, the term applies both to time-honored Irish recipes and East … END_OF_DOCUMENT_TOKEN_TO_BE_REPLACED