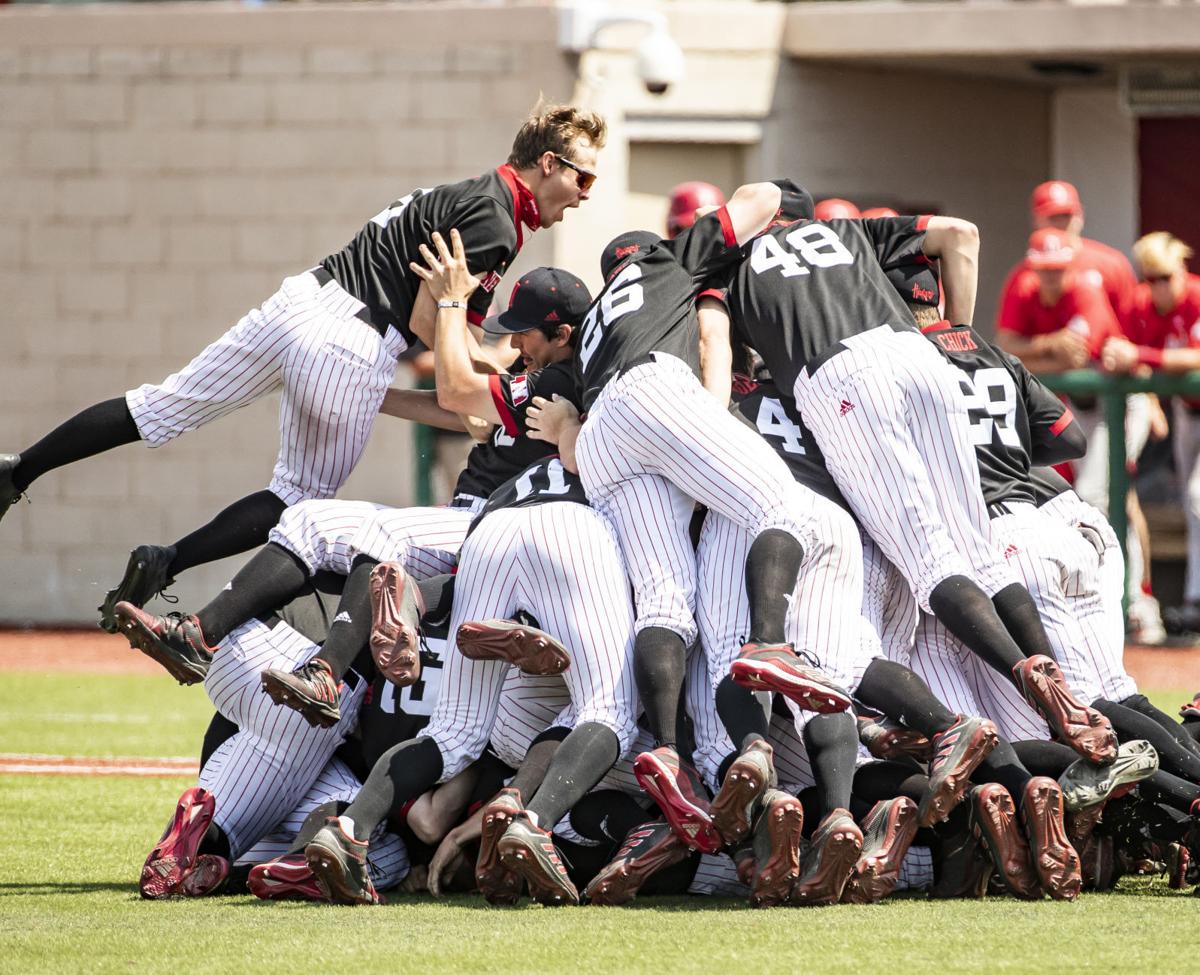 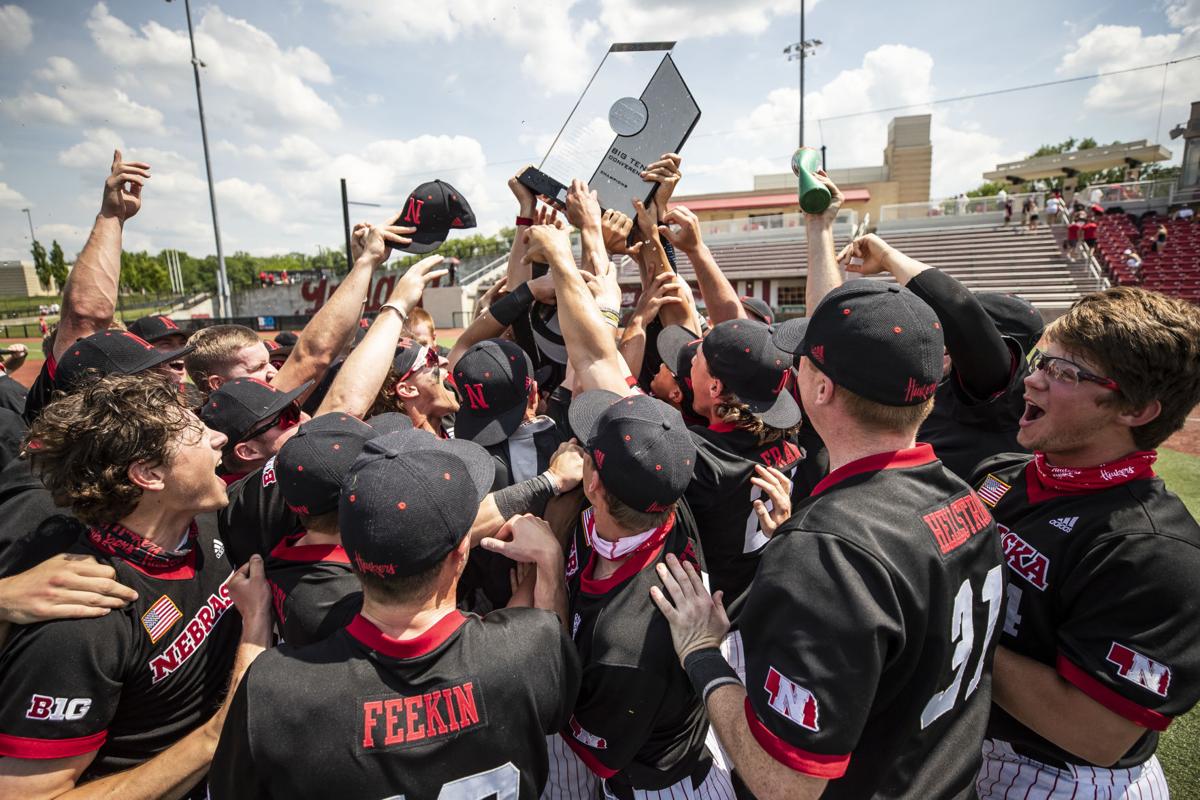 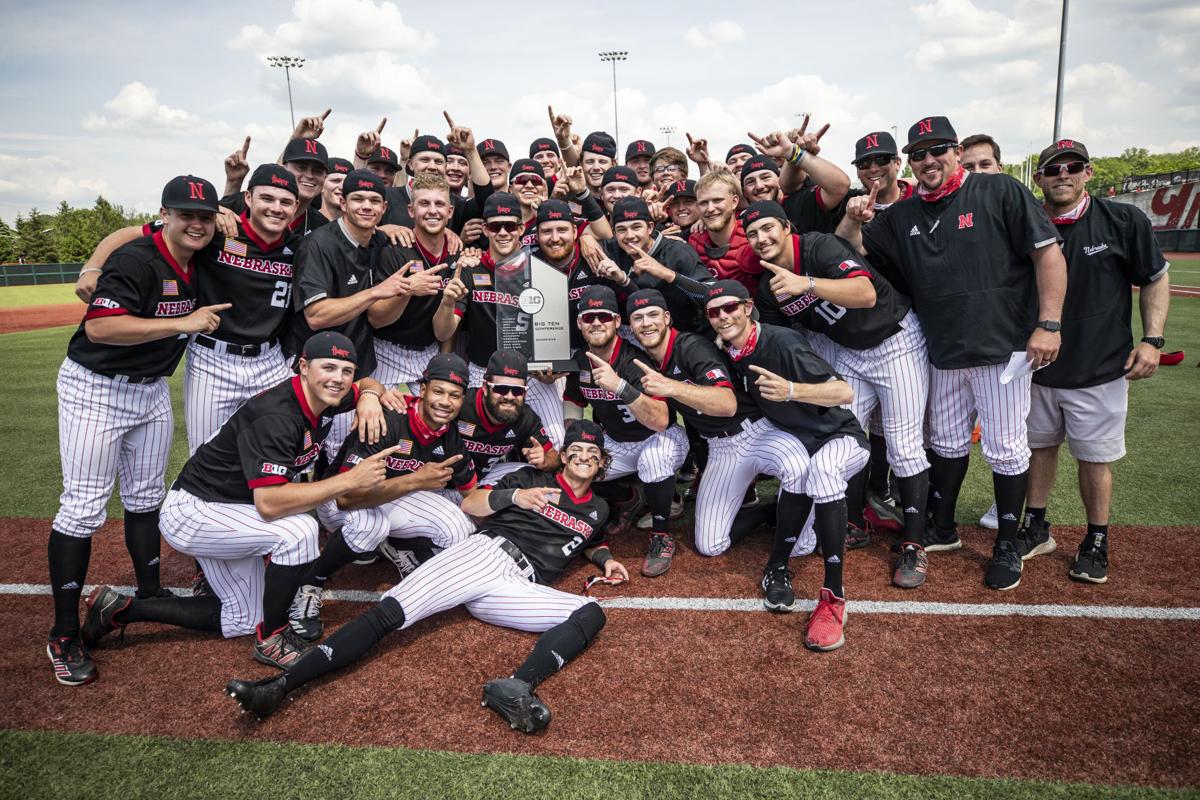 The Nebraska baseball team poses with the Big Ten championship trophy after defeating Ohio State 9-0 on Sunday in Bloomington, Indiana. 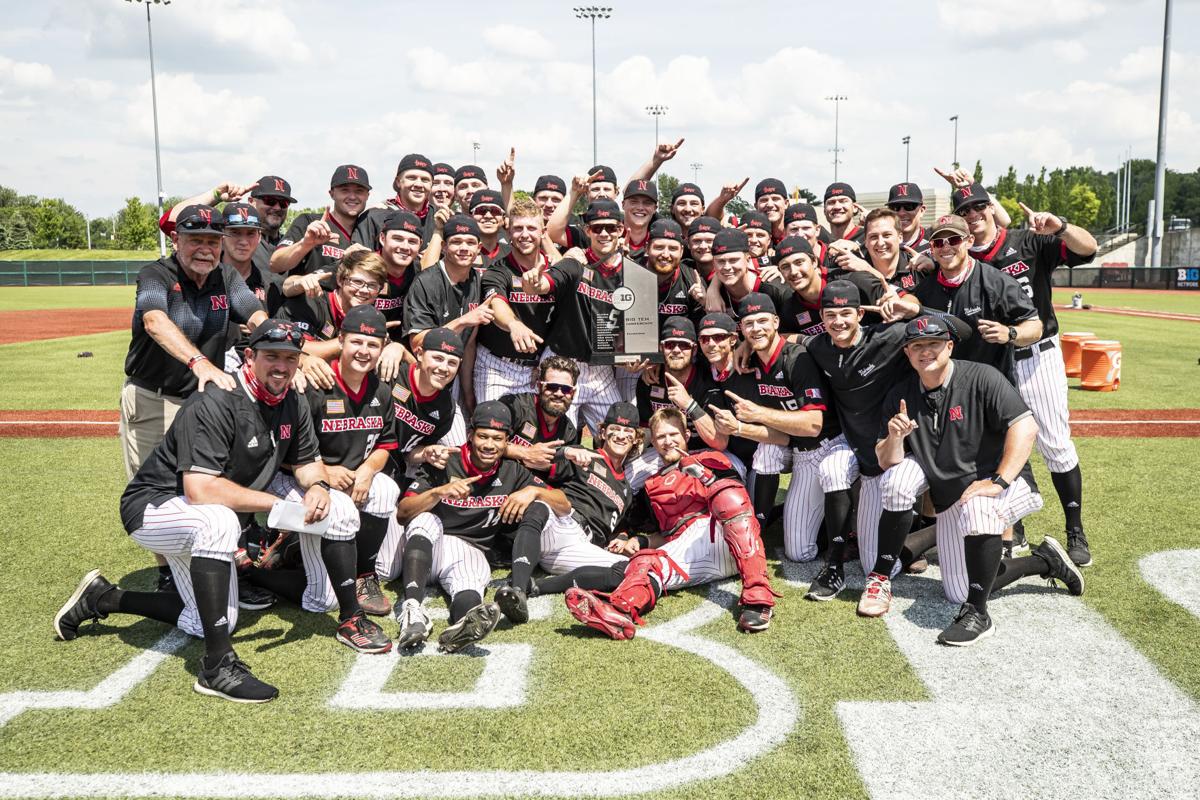 The Nebraska baseball team poses with the Big Ten championship trophy after defeating Ohio State 9-0 on Sunday in Bloomington, Indiana.

Mathematically, Will Bolt knew Nebraska had a chance to win a Big Ten championship before leaving Bloomington, Indiana, this weekend.

By Sunday morning, the math was much simpler: Beat Ohio State, and get a little help from Maryland, and the Husker baseball team would wrap up a conference title sooner than later.

“I don’t really think that we came into the weekend wanting to do anything more than to play well,” Bolt said. “Just come in and give ourselves a great shot going into the last weekend, to be honest with you.”

A championship celebration — topped with an orange Gatorade bath for its head coach — came a weekend earlier.

The Huskers blitzed Ohio State 9-0 on Sunday to cap an impressive 4-0 weekend (two wins against OSU and two against Indiana). They can tip their caps to the Terrapins, who defeated Michigan 7-3 earlier in the day.

Those two results clinched the Huskers (29-11) their second Big Ten championship — and first since 2018 — with three games to play. This one comes in Bolt’s second season as coach. It also secures an automatic bid for the NCAA Tournament.

Nebraska scored five runs in the first inning and held an 8-0 lead after four to quickly squelch any additional weekend drama with the Buckeyes — NU rallied from down 9-2 to stun OSU 11-9 Saturday.

And yet, something special was building up for Bolt’s bunch.

After the Maryland-Michigan game finished, Curtis Ledbetter, NU’s director of operations, tapped Bolt on the shoulder in the fifth inning and said, ‘It’s championship Sunday today.”

“That was all he said,” Bolt said a few hours after the game. “I kind of got where he was coming from and then they put the score of that game I think up on the scoreboard at Indiana about the seventh inning.”

The Huskers sent 10 batters to the plate in the opening frame, and took an early 5-0 lead on RBI hits from Luke Roskam, Brice Matthews, Griffin Everitt and Mojo Hagge.

The NU lineup swung away for eight runs on 10 hits in their second look at Ohio State’s Will Pfennig, who had success against the Huskers in Minneapolis earlier this season.

Then Feekin got Scottie Seymour to strike out looking to end the game, which ignited a dogpile and brought out the Big Ten hardware.

“Nobody was asking, nobody was trying to figure out what was going on (with Michigan-Maryland),” Bolt said of the early innings. “We just showed up and played great.

“I thought it was our best game of the year, quite honestly.”

Nebraska, which won its first seven Big Ten series, was swept by Rutgers three weekends ago, which eliminated the Huskers’ prospects of hosting an NCAA regional.

It could have gone one of two ways after that, Bolt said. NU could have looked at the remaining schedule, which was going to get tougher, and hit the panic button, or regroup and stay committed to team baseball.

NU responded to win nine of 10 contests to take control of the conference race that had four teams — NU, Indiana, Michigan and Maryland — left battling heading into this week.

Michigan lost two of three games to Maryland to drop out of the title chase. Nebraska’s two wins against previously rated Indiana knocked the Hoosiers out of contention.

In a season greatly affected by COVID-19, it all aligned perfectly for the Huskers in Bloomington.

“There’s a lot they’ve had to sacrifice to stay on the field, period,” Bolt said. “From social life … you can’t really do much of anything or you’re going to jeopardize having a chance to compete at all.

“The work ethic, I think that’s just what stands out to me is just the guys showing up every single day, not asking questions and just being ready to go,”

Max Anderson was 3-for-4 and eight Huskers each drove in a run against the Buckeyes. Perry, making his second start since coming back from Tommy John surgery, earned the win after pitching a scoreless first and second.

“This is everything we’ve been working for, early mornings, every single day, coming in, giving it our best effort at practice and just getting the job done whenever it counts,” senior Spencer Schwellenbach said on the BTN broadcast.

The Huskers were not on the radar in preseason projections, failing to crack the Big Ten’s top-six preseason poll. They flipped the script and needed only 40 games Big Ten games to do it.

When the Huskers host Michigan at noon Friday at Haymarket Park, they’ll do so as Big Ten champions. NU has a 3½-game lead over the Wolverines and Terps in the standings.

“Now the fun part begins, but we’ve got three regular-season games left hat we need to finish strong with and then you got the postseason,” Bolt said. “It’s what you’ve worked for all year long.”

Remember Social Distortion? In the mid-’90s, the post-punk band had a monster hit with “I Was Wrong,” a muscular, grunge anthem about the sheer, cathartic joy of admitting your mistakes. After seeing … END_OF_DOCUMENT_TOKEN_TO_BE_REPLACED

When Pam Besheer eyed this vintage Tudor-style house on Zillow, she had a strong inkling it would be exactly what she and her husband, Jay, had been looking for. Set back from the street and close … END_OF_DOCUMENT_TOKEN_TO_BE_REPLACED

This Overland Park home’s kitchen will make you lose your marbles—or, rather, make you want to cover your own kitchen in marble. The space, which was nominated for the 2022 HGTV Designer of the Year … END_OF_DOCUMENT_TOKEN_TO_BE_REPLACED

Here are fifteen great things to do in Kansas City this weekend, December 8-11, including Pretty Woman: The Musical, Kansas City Ballet’s The Nutcracker, and The 1975 in concert. The Piano … END_OF_DOCUMENT_TOKEN_TO_BE_REPLACED