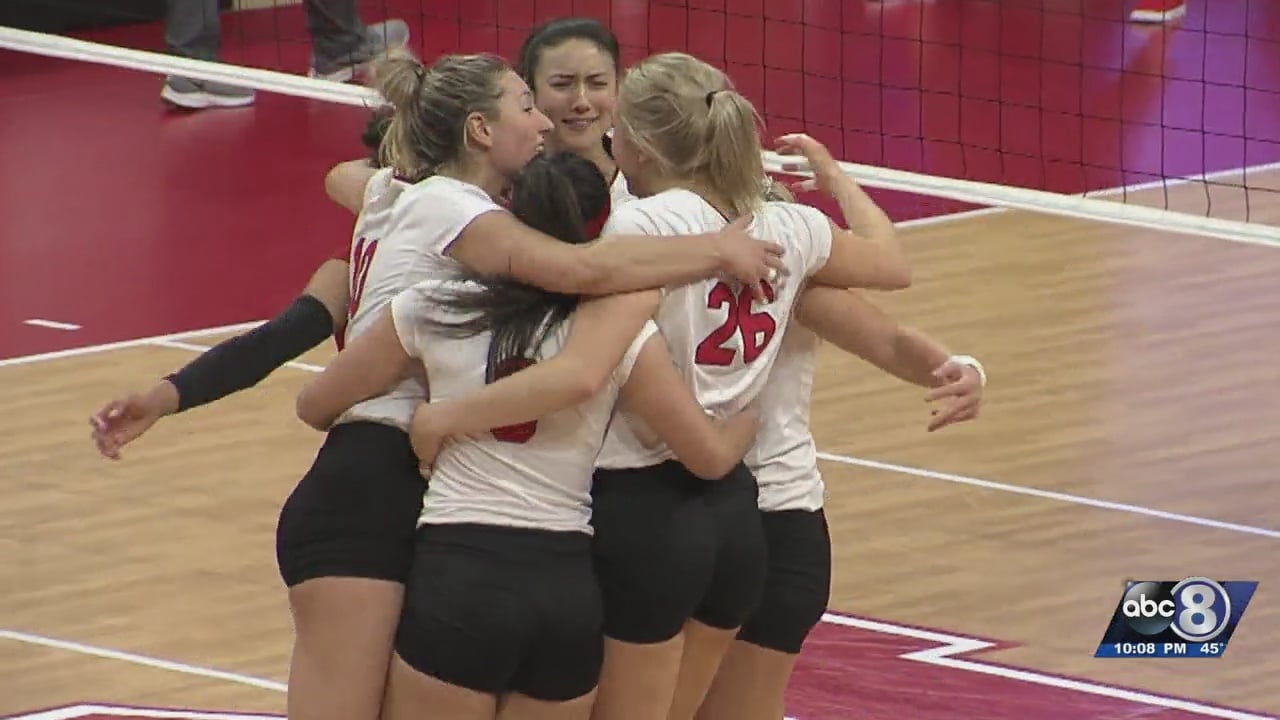 The No. 4 Nebraska volleyball team battled back from an 0-2 deficit to upend previously unbeaten No. 11 Ohio State on Friday night at the Bob Devaney Sports Center.

LINCOLN, Neb. (Husker Athletics) — The No. 4 Nebraska volleyball team battled back from an 0-2 deficit to upend previously unbeaten No. 11 Ohio State on Friday night at the Bob Devaney Sports Center.

The Huskers (10-1) dropped the first two sets to the Buckeyes (12-1) by identical scores of 25-21. But Nebraska came out of the intermission rejuvenated, taking back-to-back 25-20 wins in sets three and four. In set five, the Huskers never trailed after taking a 2-1 lead en route to a 15-10 match-clinching win.

It marked the first time the Huskers rallied from down 0-2 to win in five sets since the 2018 NCAA Semifinal win over Illinois. The Huskers were pushed to five sets for the first time this season, while Ohio State played its seventh five-set match of the season. Nebraska had a .252 to .222 hitting percentage advantage in the match, and the Huskers out-blocked Ohio State, 9-5.

Senior All-American Lauren Stivrins led the comeback effort with 18 kills and six blocks while hitting .424 for the match. On the night, Stivrins became the 22nd Husker in school history to reach 1,000 career kills and the eighth to do so in the rally-scoring era (2001-present).

Sun tied her season high with 17 kills to go with four digs and two blocks. Madi Kubik contributed 13 kills with eight digs, and Riley Zuhn chipped in six kills and three blocks. Kayla Caffey had five kills and a pair of blocks.

Nicklin Hames tallied 51 assists and 12 digs. Kenzie Knuckles tied her career high with 24 digs and served one ace. Keonilei Akana had a career-high 17 digs to go with a career-best three service aces. Nebraska won the serving battle with six aces and nine errors to two aces and 12 errors for Ohio State.

Emily Londot had 23 kills and 17 digs to pace the Buckeyes. Twenty of her 23 kills came in the first three sets, as the Huskers held her to just three in the final two frames.

The two teams will play again on Saturday at 8 p.m. on BTN and the Husker Sports Network.

Set 2: Kubik and Sun opened set two with kills to spark a 4-1 Husker lead. The Buckeyes answered with six of the next nine points to tie the score at 7-7. After the Huskers went back ahead 10-8, Ohio State scored four in a row to gain a 12-8 advantage. A pair of kills each by Caffey and Kubik and an ace by Akana helped the Huskers rally to take a 19-16 lead. However, a pair of Husker hitting errors and a two Ohio State kills allowed the Buckeyes to back ahead, 20-19. The Huskers hit wide on two straight rallies to put Ohio State up by two, 22-20, and Londot’s 15th kill won the set for OSU, 25-21.

Set 3: Back-to-back kills by Kubik and Sun had the Huskers up 11-9, but Ohio State scored three in a row to go up 12-11. Kills by Hames and Sun, followed by a Hayley Densberger ace gave the Huskers a 14-12 advantage, and Caffey contributed a pair of kills to help NU to a 17-14 lead. A Knuckles ace increased the lead to four at 19-15. Ohio State got no closer than three the rest of the way, and Stivrins, Sun, Caffey and Zuhn contributed kills to give the Big Red a 25-20 win.

Set 4: Stivrins and Sun opened the set with three straight kills to get NU off on the right foot. Ohio State hung in though and tied the score at 14-14 on yet another kill by Londot. But a solo block by Hames sparked a 5-1 Husker run that made it 19-15 and forced an Ohio State timeout. Sun and Kubik added kills in that sequence. Stivrins and Zuhn blocked a Buckeye attack, and Stivrins posted her 16th kill to make it 22-17. The Huskers closed out the 25-20 win with two kills by Kubik. Nebraska hit .353 in set four and held Ohio State to .057.

Set 5: Stivrins posted a kill and a block with Kubik, and Akana served her third ace of the match for a 3-1 NU lead. Sun and Stivrins teamed up for another Husker block, and Sun tacked on her 15th and 16th kills to make it 8-4 Huskers at the media timeout. Ohio State pulled within 8-6, but Sun and Kubik struck again for the Big Red before Ohio State hit long to make it 11-6 Nebraska. Zuhn put away her sixth kill and then combined with Stivrins for a block and a 13-8 lead. Kubik rolled her 13th kill for match point at 14-10, and Stivrins pounded her 18th kill to seal the match. Nebraska out-hit Ohio State .412 to .190 in the final set.

Shanita McAfee-Bryant knows the recipe for success. From creating new recipes within her family’s kitchen to winning Cutthroat Kitchen, a popular Food Network game show, McAfee-Bryant looks to use her … END_OF_DOCUMENT_TOKEN_TO_BE_REPLACED

For forty years, the low-slung but striking Vine Street stone buildings on the periphery of Kansas City’s historic Jazz District have sat vacant, boarded up, surrounded by a chain-link fence and … END_OF_DOCUMENT_TOKEN_TO_BE_REPLACED

Illustration by Makalah Hardy. As the name implies, hot pots are hot. How hot? My server can’t tell the exact temperature of the rich broth tossing dried chiles around at a rolling boil on the … END_OF_DOCUMENT_TOKEN_TO_BE_REPLACED

André’s has been making quiche since 1955, and not originally by choice. “The concept that my grandparents came over here from Switzerland with was exclusively pastries and chocolates—1955 Kansas City … END_OF_DOCUMENT_TOKEN_TO_BE_REPLACED

Rain or shine, something Kansas Citians have been able to count on for the last thirty years is turning to KSHB 41 News and watching chief meteorologist Gary Lezak tell them what to expect. But with … END_OF_DOCUMENT_TOKEN_TO_BE_REPLACED