Above image credit: Brenette Wilder (right) navigates her husband, Cleotis, as he drives a route Aug. 6 collecting data for a heat-mapping project coordinated through the University of Missouri-Kansas City. (Mike Sherry | Flatland)

As Cleotis Wilder eased his Acura SUV out of a midtown parking lot, his wife, Brenette, exclaimed from the passenger seat, “We are off to the races guys!”

For the next hour, Brenette Wilder navigated her husband along a winding, 16-mile route through Kansas City neighborhoods — nearly missing being broadsided along 39th Street at one point and doubling back later on to find 36th and Holmes streets. The drive snaked through the tony enclave just south of the Country Club Plaza as well as less affluent areas near Prospect Avenue.

Like other volunteers on the steamy Friday afternoon last week, the Wilders were twisting and turning through the streets of Kansas City in the name of a project coordinated by Fengpeng Sun, a climate scientist and assistant professor at the University of Missouri-Kansas City. The project gathered tens of thousands of data points in one day.

Funded through the National Oceanic and Atmospheric Administration (NOAA), the Kansas City effort is part of a larger nationwide campaign to map urban pockets where temperatures can be nearly 10 degrees higher than outer lying areas.

These “heat islands” can be harmful to both people and places, and Sun hopes that data from the heat mapping project can help local government officials devise mitigation strategies. The city’s Office of Environmental Quality is a partner in the project.

Worries about heat islands are related to broader concerns about climate change, highlighted by a landmark report issued Monday by the United Nations’ Intergovernmental Panel on Climate Change.

The report concluded that “human-induced climate change is already affecting many weather and climate extremes in every region across the globe.” Repercussions have included scorching heat waves, unusually heavy precipitation and extreme droughts.

Closer to home, data cited by the Office of Environmental Quality indicates Kansas City is expected to see an increase in the annual average temperature of 4 degrees by the middle of this century.

Other data, cited by NOAA on the heat mapping campaign website, show that Kansas City had the seventh greatest urban heat island intensity out of 60 cities analyzed, and that surface temperature in more densely built-up areas of Kansas City can reach up to 13 degrees hotter than temperatures in rural locations. 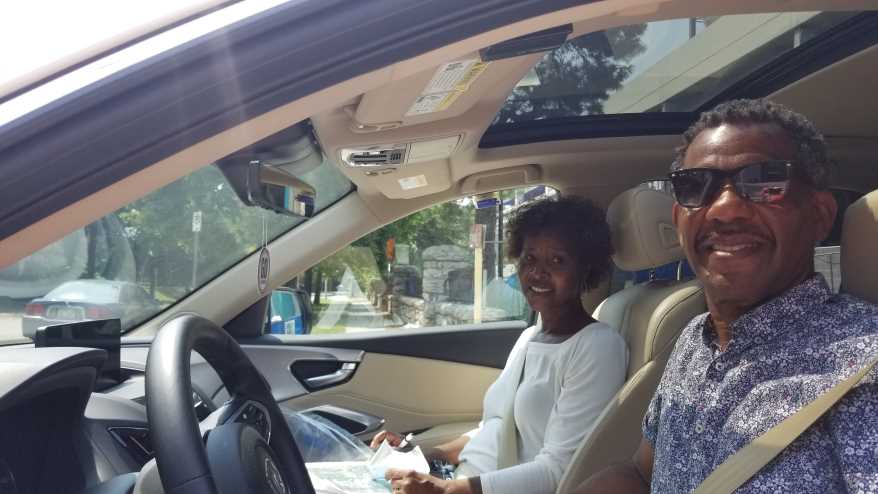 Cleotis and Brenette Wilder prepare to set off on their heat-mapping route, which started in a parking lot at 36th Street and Broadway in Kansas City. (Mike Sherry | Flatland)

Governmental action in Kansas City dates back 15 years to a City Council directive that staff develop a climate protection plan, which the city adopted in July 2008. The report called on the city, and the community at large, to reduce greenhouse gas emissions by 30% below 2000 levels by 2020.

The city exceeded that goal, said Chief Environmental Officer Andy Savastino, but there is more work to be done on the community side.

Savastino’s office is now updating the climate protection plan, at the direction of the City Council, which mandated that the new plan also take into account “resilience,” the ability of different populations or areas of the city to cope with weather extremes.

“Climate change affects all residents and businesses,” the council noted in the resolution mandating the update to the climate protection plan, “but communities that already face socioeconomic and health inequities will be most severely impacted, including youth, elderly, people of color, and low-income communities, and such communities therefore require an investment in resilience that is proportionate to these more severe risks.”

Savastino hopes to have the updated plan completed by early next year.

Established heat-island mitigation strategies, as laid out by the U.S. Environmental Protection Agency (EPA), include increasing tree and vegetation cover in neighborhoods, creating “green roofs” by planting a layer of vegetation, and using emerging technologies for “cool pavement” that reflects more solar energy and enhances water evaporation to keep from heating stormwater runoff.

The update of the city’s climate protection plan is just the sort of effort Sun aims to help by mapping the urban heat islands.

All in all, Sun had more than 50 volunteers participating on Aug. 6, a day when the high temperature reached 92 degrees.

The study area covered about 80 square miles, broken down into 10 zones south of the Missouri River. Teams collected readings from each zone in early morning, afternoon and evening shifts. A meter attached to the car collected data every second, and with the many variables collected by each sensor, one car alone collected more than 14,000 data points on each trip. 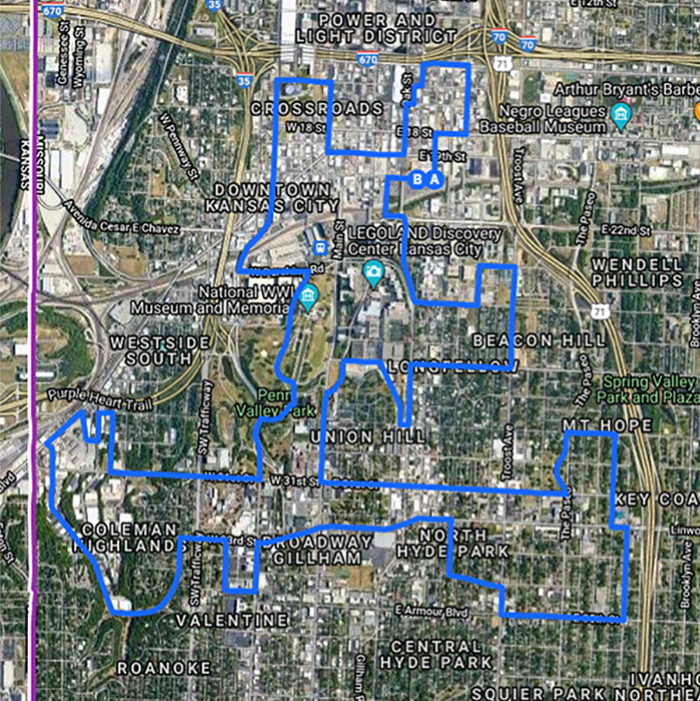 The winding route driven by the Cleotis Wilder snaked through a variety of Kansas City neighborhoods.

NOAA says heat mapping participants can expect data back within six to eight weeks. The analysis sent back includes a set of high-resolution air temperature and humidity data, and a report that provides a detailed analysis of distribution of heat in the morning, afternoon and evening. Interactive, high-resolution web maps of the modeled air temperature and heat index are also provided.

Along with informing public policy, Sun has also embraced the community-education goal of the heat mapping campaign through the use of volunteer data gatherers.

“It is a good case to show people, yes, (climate change) is happening,” he said.

NOAA describes the local efforts as “community science field campaigns (that) are an excellent opportunity to raise awareness about the many impacts of extreme heat and the factors that may affect the uneven distribution of heat throughout a community.”

The agency website also presents the local projects as an “opportunity to teach aspiring young scientists about how scientific field campaigns are conducted.”

It was that teaching aspect that drew Brenette Wilder to the campaign.

She is president of Kansas City Teen Summit, a Lee’s Summit-based nonprofit that provides STEM opportunities, and other programming, to at-risk youth. She has a professional background in chemical engineering.

The heat mapping campaign complemented a previous temperature-collection project she had her participants work on as an outdoor activity that worked well during the COVID-19 pandemic. 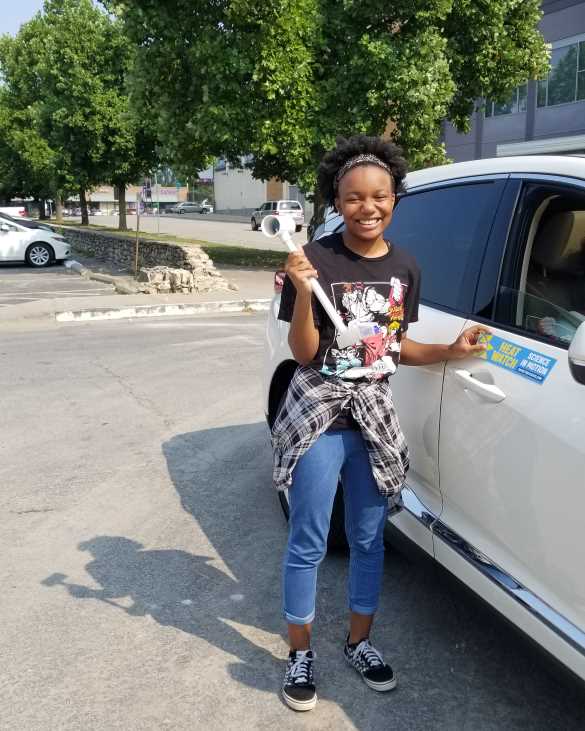 Chaumila Burnam, 15, who rode with Cleotis and Brenette Wilder during the heat-mapping study, happily removed the data-gathering sensor after the 75-minute route through the streets of Kansas City. (Mike Sherry | Flatland)

As it turned out, Sun’s data collection day came after Wilder’s summer programming ended. But she was able to coax one of her program participants to come along for the ride: 15-year-old Chaumila Burnam, who is heading into her sophomore year at Hogan Preparatory Academy in Kansas City.

Burnam sat in the back seat and helped with navigation by reading out next steps from a printout of the route. She confessed to being a little bored, and the route’s convolutions had Cleotis Wilder muttering a little about being sent all over town.

“We are almost there,” Brenette Wilder said about half way through the route. “Let it go. Enjoy the experience.”

The drive ended at about 4:15 p.m. back at the parking lot at 36th Street and Broadway, leaving only the short trip back to the UMKC campus to return the sensor.

Reflecting on the experience, Burnam noted the contrast between manicured, tree-covered sections in the well-to-do neighborhoods and a weed-infested lot on the other side of town that was supposed to be a community garden.

Mike Sherry is a former editor and writer for Flatland. He is now a communications consultant for nonprofits and freelance writer.

Thank you for subscribing!

Check your inbox, you should see something from us.

February is short but sweet. This month, we share our picks for the city’s best bonbons and a lot of other unique sweets that are baked, dipped and drizzled to perfection. By Dawnya Bartsch, Martin … END_OF_DOCUMENT_TOKEN_TO_BE_REPLACED

Photo by Caleb Condit and Rebecca Norden It’s Valentine’s Day month, but fancy chocolate deserves to be enjoyed year-round. We visited chocolatiers around the … END_OF_DOCUMENT_TOKEN_TO_BE_REPLACED

Posted on December 1, 2022 Overland Park now has more access to information about its Police Department than ever, thanks to a library of online transparency-focused … END_OF_DOCUMENT_TOKEN_TO_BE_REPLACED

The annual Beard Awards semifinalists nominations were just released and Kansas City’s food and drink scene has something to celebrate. The KC area has seven semifinalists by our count, including two … END_OF_DOCUMENT_TOKEN_TO_BE_REPLACED