This story was first published in KCUR’s Creative Adventure newsletter. You can sign up to receive stories like this in your inbox every Tuesday.

Like many of us, artists have struggled with the isolation brought about by the pandemic. Musicians who make a living playing live events took to Zoom for at-home virtual concerts. Even successful artists have been set back decades just in the past 15 months.

In the spring of 2020 — when we knew so little of the pandemic that has since reshaped our lives — KCUR spoke with four area artists to give our readers some ideas for how to stay creative at home.

Artist Matt Hawkins posted videos for families to make fun things out of paper — such as a tiny baby Yoda.

Dramatist Cynthia Hardeman wanted her students to be able to perform, so she hatched a plan that she hoped would encourage them to put on plays at home and share them on her Drama Time Facebook page.

Artist Amy DeSitter created a video tutorial that walked people through making art for their homes using items they probably already had on hand.

We followed up with each of these artists to see how they’ve fared since last March, what they’re doing now, and how they’re staying creative through the pandemic.

Since March 2020, paper craft artist Matthew Hawkins has been working on a product line inspired by his book and CD package called “Words, Notes and Drawings of Animals.”

Matthew Hawkins’ paper folding kits of various Star Wars vehicles have been sold at Costco, and other projects have been included with kids’ meals at restaurants like Arby’s and Sonic. Some of his work is even on display in museums at Disney parks.

He’s just about to relaunch his do-it-at-home video series, so you can whip up some fun at home with whatever paper you have lying around.

Since last March, he’s been working on a product line inspired by his book and CD package called “Words, Notes and Drawings of Animals.” He’s created plush toys, posters, stickers and T-shirts all based on the quirky drawings in the book. Since April 2021, he’s worked a booth at arts and crafts fairs from Denver to Chicago.

Hawkins is also just about to finish a children’s book he’s writing with his adult nephew, Hunter Hawkins. It’s called “Sydney” and is a take on the Ugly Duckling story — this little ducky has a big bump on her beak. Watch for it by the holidays. Until then, you can find his work here. 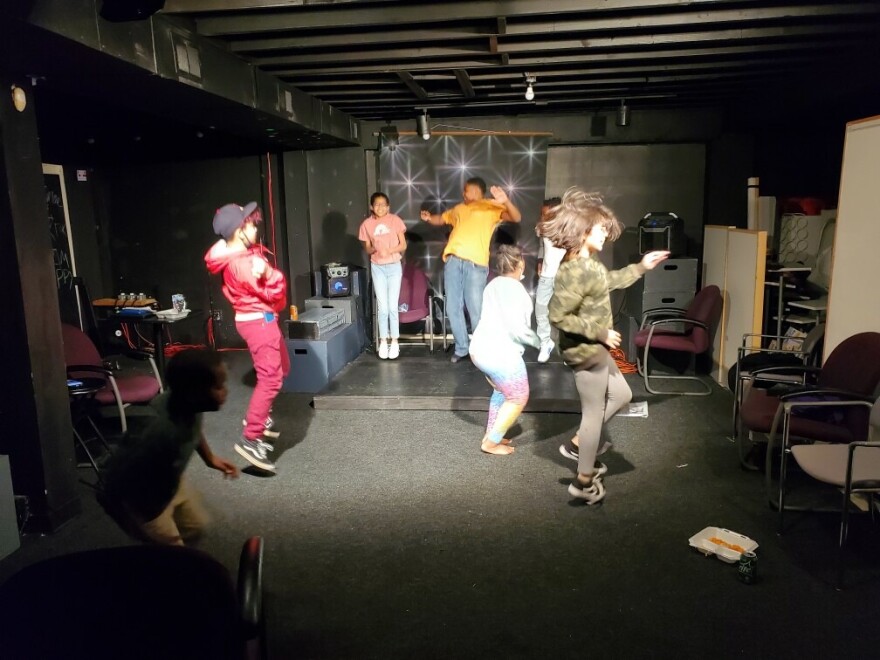 Drama Club is just one of the many opportunities offered by Blackbox on Troost, a community arts space that engages the local community in performing and visual arts.

Cynthia Hardeman runs Blackbox on Troost as a Start-Up Resident at Charlotte Street. One of her goals with BOT was to make art accessible to the families who live in the surrounding neighborhoods, and she’s been offering drama, improv, vocal, and dance classes for kids from 4-18.

When everything shut down, she had the idea to coach kids through a virtual performance of “The Wizard of Oz.” It turned out families were struggling too much to support that activity, and it didn’t take off. Instead, other artists used the BOT.

She didn’t open for in-person classes until this past spring. Hardeman said being together again gives students space to “shed their fears.” She’s also been working with Spinning Tree KC Theatre’s Variety Theatre Camp. In August, Drama Time KC will begin its 10th session of classes at BOT, offering drama, vocals, improv, dance and filmmaking courses. 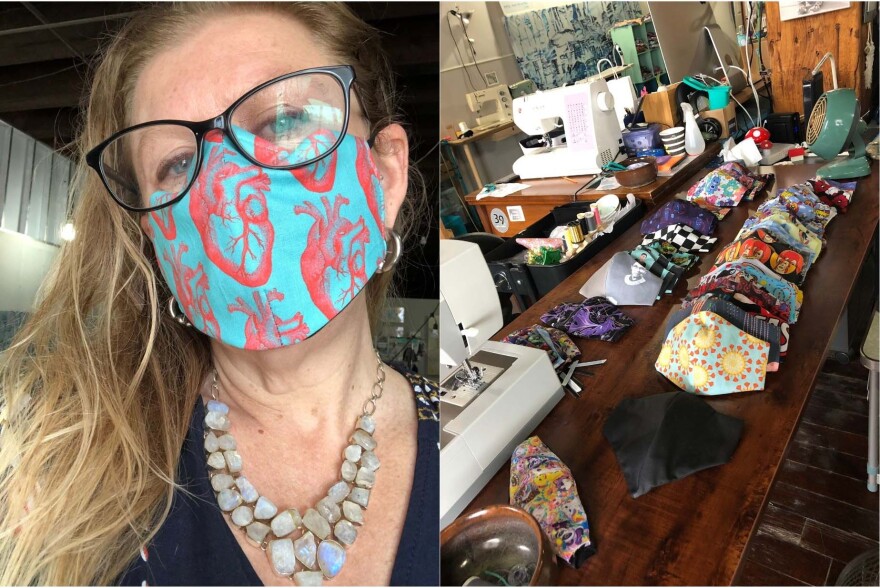 After Amy DeSitter sewed a few masks for her son, making and selling masks became her main source of income for several months in 2020.

When KCUR talked to artist Amy DeSitter last spring, she imagined she’d spend the foreseeable future teaching art via Zoom; all of the UMKC classes she expected to teach were canceled. The idea wasn’t thrilling, but she gamely put out a couple of instructional videos.

Then she made some masks for her son and showed them off on Facebook. The next thing she knew, mask orders started rolling in. Making masks became her only source of income from April through November 2020. DeSitter said she made as many as 5,000 masks, though she did lose track. Just before the holidays, her Etsy sales kicked in.

In the spring of 2021, she began teaching again at UMKC, and now she is hopeful that she’ll be back to in-person teaching in the fall.

Moving forward, she’s offering private courses for serious artists, as well as fun classes for bridal showers or other parties. She says she has been amazed at how things have worked out during such a difficult time. 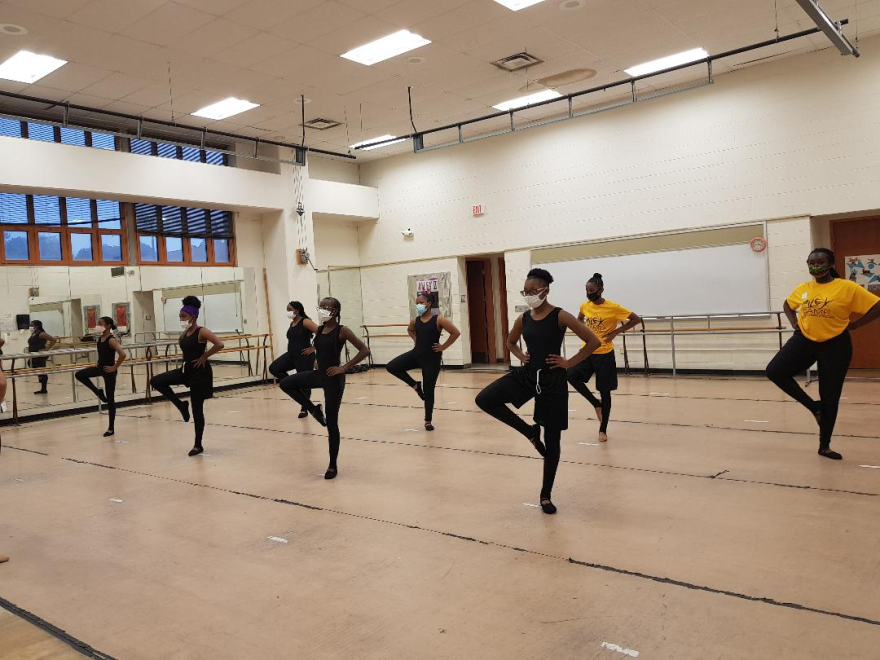 When KCUR last spoke to Kansas City Friends of Alvin Ailey chief artistic officer Tyrone Aiken, he was dancing around the dining room table with his family and encouraging others to do the same. From there, he quickly had to decide what to do about Kansas City’s Ailey Camp, a summer dance camp he’s run for years.

“Taking something that is three-dimensional, that is really about connection, about community, about mentorship, and turning it into this flat screen is really, really challenging,” he says.

But Aiken figured it out. By the end of summer 2020, he decided to put two of his classes together for a masked, distanced outdoor performance. This summer, he’s still enforcing masking and just wrapped four-week Ailey Camps on both sides of state line, as well as a five-week high school program called Summer Dance.

In another artistic venture, Aiken recently debuted a film called “I Want to Testify” at Nelson-Atkins Museum of Art. It’s part of the African American Artists Collective and is about erasure — the idea of existing spaces that Kansas Citians don’t know about by design.

He gives Troost Lake as an example. Troost Lake was developed on land that was once part of a plantation owned by James Porter. The Porter family owned horses, cattle, hogs and 40-100 slaves, according to reporting by Flatland KC and the Kansas City Star.

That land was then sold to the Kansas City Cable Railway Company, which developed Troost Lake. But no marker mentions the history of the slaves who lived on the land, and the fact has largely been lost to time.

This form needs Javascript to display, which your browser doesn’t support. Sign up here instead

This year’s Halloween weekend is packed with events in Kansas City, from paranormal investigations to a disco night at one of the city’s swankiest nightspots. Here are our seven favorite Halloween … END_OF_DOCUMENT_TOKEN_TO_BE_REPLACED

Strang Hall, the food hall in Overland Park, is expanding to the Lightwell building in downtown Kansas City.  Menlo Food Labs, Strang Hall’s parent company, announced today that they will be … END_OF_DOCUMENT_TOKEN_TO_BE_REPLACED

Kansas City has long been a city of artists, but the last year and a half of pandemic living led to more people than ever making things like kiln-fired porcelain earrings, custom … END_OF_DOCUMENT_TOKEN_TO_BE_REPLACED