Jeff Roberts of Columbia, Mo. cools down with a nozzle spray from the St. Louis Fire Department’s Engine 14 outside Busch Stadium before attending the Cardinals game against the Detroit Tigers on Wednesday, Aug. 25, 2021. Roberts, living in between Kansas City and St. Louis, attends numerous Royals and Cardinals games during the season. Photo by Robert Cohen, rcohen@post-dispatch.com 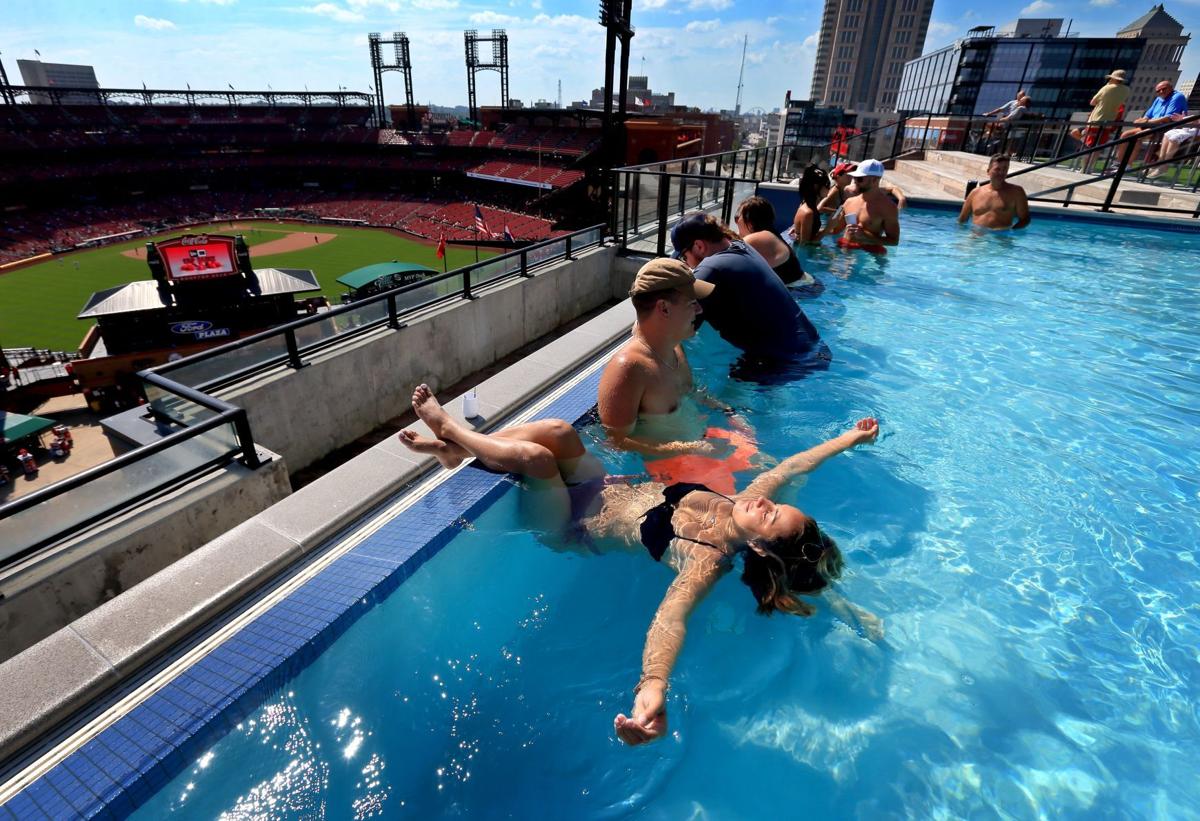 Nida Dogan lounges in the water with her boyfriend Caleb Davis as they stay cool in the pool at One Cardinal Way watching the St. Louis Cardinals play the Detroit Tigers at Busch Stadium in St. Louis on Wednesday, Aug. 25, 2021. “Nothing beats being in a pool to watch the Cardinals” says Davis who has lived in the building for about six months. Wednesday’s sweltering heat and humidity are expected to continue into the weekend. The Cardinals defeated the Tigers 3-2 in extra innings. One Cardinal Way is currently 100% leased but management says they expect some openings for new tenants in the fall, beginning in September. Photo by David Carson, dcarson@post-dispatch.com 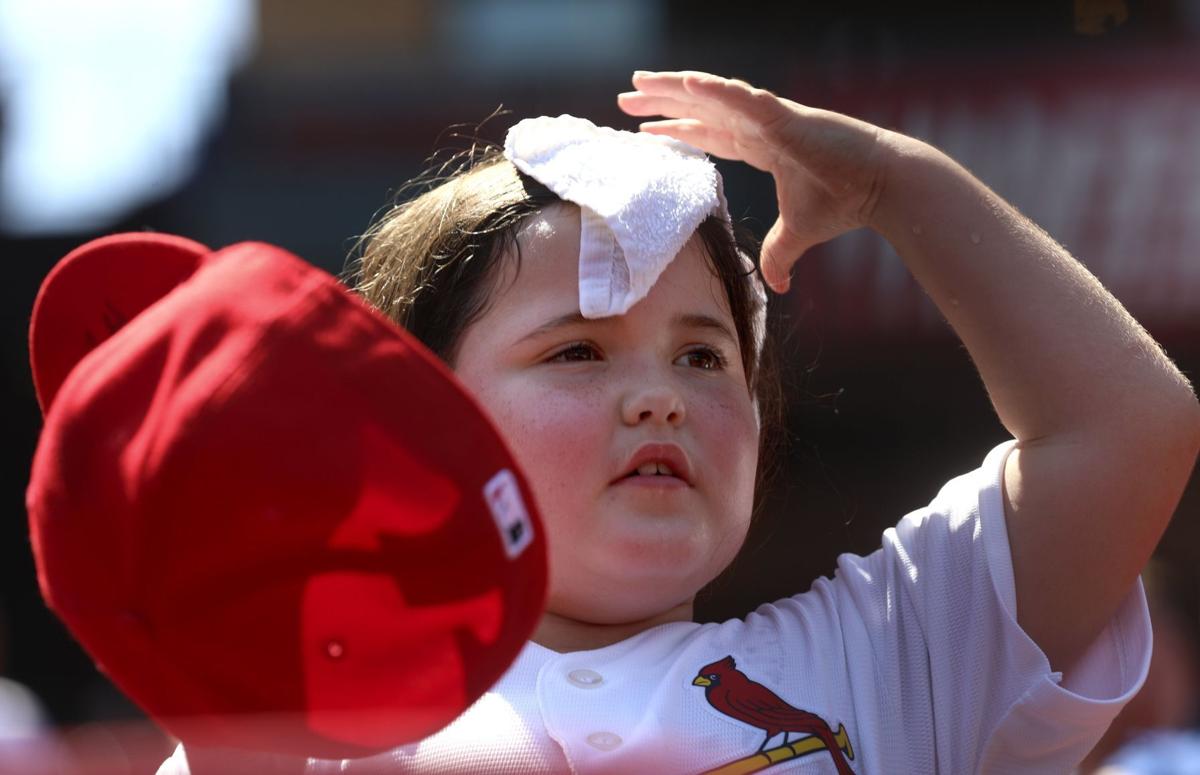 Ellie Rosser, 8, places a wet towel on her head to cool off during a baseball game between the St. Louis Cardinals and the Detroit Tigers on Wednesday, Aug. 25, 2021, at Busch Stadium in St. Louis. Photo by Laurie Skrivan, lskrivan@post-dispatch.com 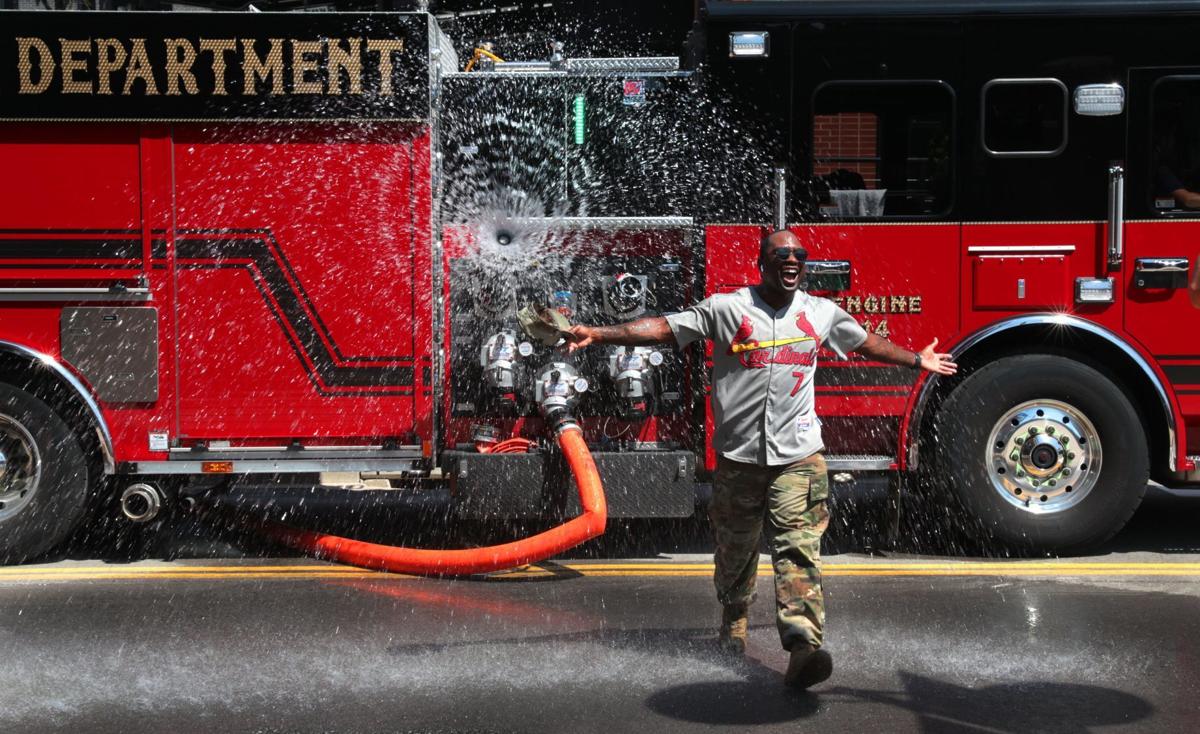 Army Sgt. Marcus Compton cools down with a nozzle spray from the St. Louis Fire Department’s Engine 14 outside Busch Stadium before the Cardinals game against the Detroit Tigers on Wednesday, Aug. 25, 2021. Compton works at the Army recruiting station in Fairview Heights. Photo by Robert Cohen, rcohen@post-dispatch.com 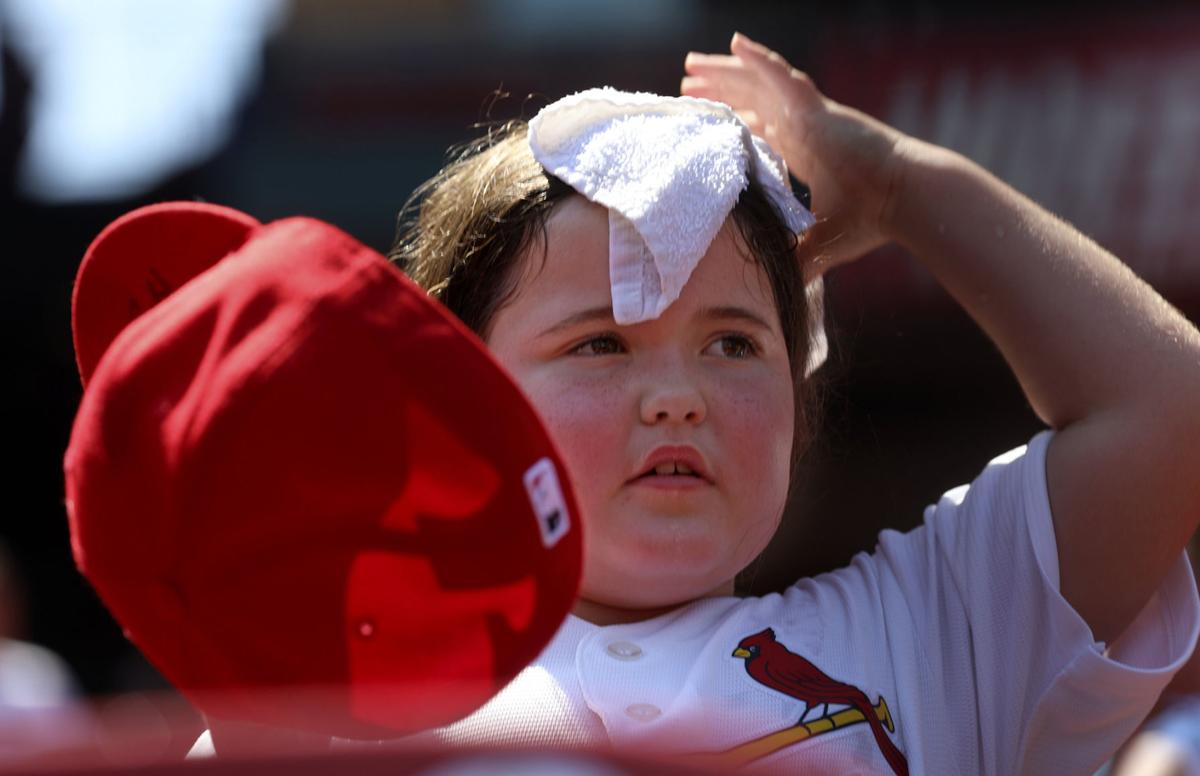 Eight-year-old Ellie Rosser places a wet towel on her head to cool off during a Wednesday’s game between the Cardinals and the Detroit Tigers at Busch Stadium.

ST. LOUIS — Highs in the area are expected to stretch to above 90 degrees through the weekend, according to the National Weather Service.

The region remains under a heat advisory until Thursday evening, with heat indexes in the afternoon hovering around 106 degrees. The weather service advises people to avoid being in the sun and to drink plenty of fluids.

Thursday will also have a slight chance of thunderstorms, according to the weather service.

The high Friday and Saturday is again sitting in the mid-90s, with lows in the mid-70s and clear skies.

Sunday and Monday carry a 40% to 50% chance of thunderstorms. The temperature falls just a little next week, with highs in the upper 80s.

For residents in the St. Louis metro region, information on cooling centers or energy assistance related to the excessive heat is just a phone call or website away:

The pandemic threw a wrench in many people’s holiday shopping. What used to be trips to stores and markets with the family to find the perfect gift turned into Amazon wish lists and online gift cards. … END_OF_DOCUMENT_TOKEN_TO_BE_REPLACED

Rhonda LeValdo travels from Lawrence to Kansas City for every Chiefs home game, but she’s never actually been inside Arrowhead Stadium. Instead, she stands by a bus stop at the corner of Red Coat Lane … END_OF_DOCUMENT_TOKEN_TO_BE_REPLACED

For eighty years, a story has remained buried under the tales of the great men of Kansas City jazz, from Count Basie to Charlie Parker. Living and playing alongside them was another legend, pianist … END_OF_DOCUMENT_TOKEN_TO_BE_REPLACED