As sea level rises, it can be easy to miss the subtlety of higher water. It’s much harder to overlook saltwater more frequently flooding streets, impeding daily life and making existing problems worse.

The frequency of high-tide flooding along the U.S. coasts has doubled since 2000, and it’s expected to increase five to 15 times more in the next 30 years, the National Oceanic and Atmospheric Administration warns in a new report released July 14, 2021.

I work with coastal communities in the northern Gulf of Mexico that are facing the risks of rising seas as they try to avoid preventable damages and costs, such as infrastructure failures and falling property values. Information like the NOAA report is critical to helping these communities succeed.

High-tide flooding impedes the use of roads and increases wear and tear on stormwater and wastewater systems. The impact can seem minor, but as the frequency increases, these seemingly inconvenient flood days can have long-lasting impacts.

Already, areas at risk from sea level rise have seen decreases in property values, particularly where cities and homeowners haven’t taken steps to increase flood resilience. Insurance premiums are beginning to increase to reflect actual risk, and bond ratings are increasingly being tied to the resilience efforts of communities.

Flooded roadways can create dangerous situations where first responders struggle to safely reach those in need. Businesses get fewer visitors and feel the loss in depressed revenues. The more often this happens, the more it ripples through coastal economies. It can affect tax revenues and erode community ties. 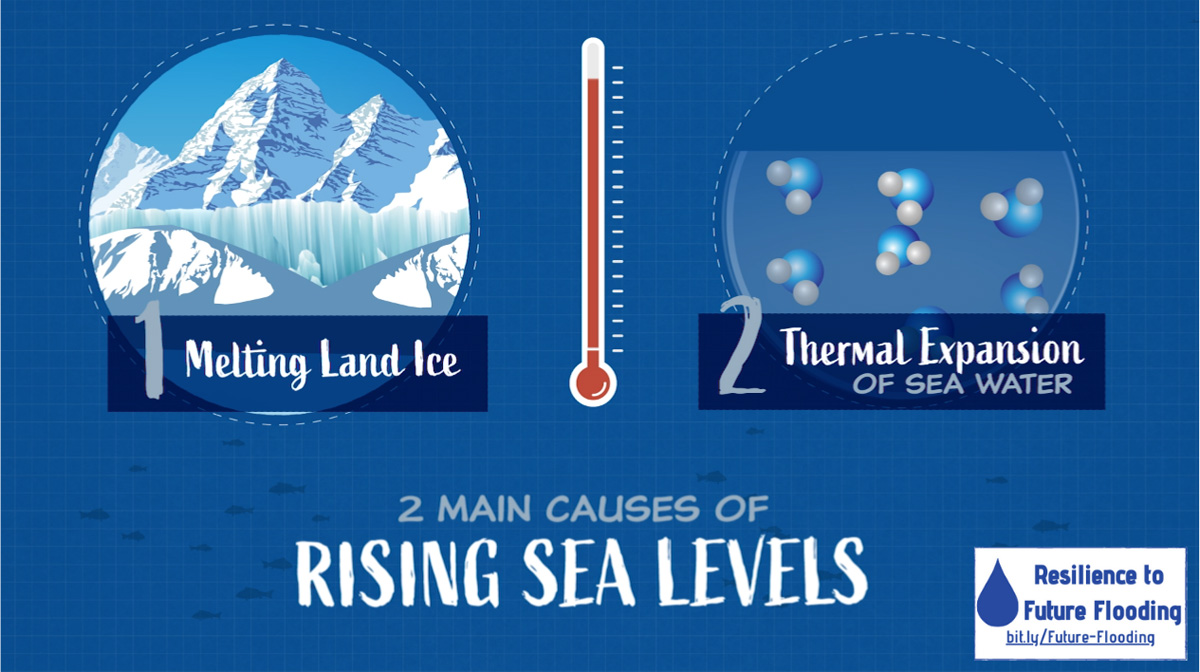 Globally, sea level has been rising by about one-eighth of an inch every year, and that rate is accelerating. It’s caused by both land ice melting as global temperatures rise and by thermal expansion in the oceans; the volume of water increases as it warms. Mississippi-Alabama Sea Grant Consortium, CC BY-ND

Sea level rise disproportionately impacts poorer, marginalized communities, and the impact of high-tide flooding has been no exception. People living in some of the most underserved coastal communities are facing increases in their insurance premiums because of the flood and storm risks, sometimes with more than 90% of the insurance policies in a single ZIP code projected to increase.

Ways to Reduce the Threat of High-Tide Flooding

NOAA’s projections provide valuable foresight that can help local governments, property owners and other coastal stakeholders to act before the water rises.

Communities can upgrade their infrastructure, such as raising roadways and installing backflow preventers in stormwater systems, and modify building standards such as increasing freeboard, the distance required between the first floor and base flood level, or designating base flood elevations outside of current FEMA flood zones to help prepare communities to withstand higher seas. Communities can also work with nature to preserve and restore coastal habitats that provide natural flood protection such as marshes and barrier islands.

Pensacola, Fla., is one example of a city being proactive. It recently completed a sea level rise vulnerability analysis to determine where high-tide flooding will begin to strain infrastructure, low-income neighborhoods, economic hot spots and critical facilities. The city was able to recommend where to prioritize action and what kind of action will be necessary to keep high-tide flooding from being costly or as damaging.

The message from the new report is clear: High-tide flooding and other more severe types of flooding have already increased with sea-level rise and are expected to accelerate in the coming years. Communities have an opportunity to act now to reduce the impacts.

Residents in any coastal community can reach out to their local governments to encourage forward thinking. For more information on how to get involved in coastal resilience, almost all coastal and Great Lakes states have a coastal resilience specialist within their Sea Grant programs. Each regional NOAA Office for Coastal Management can offer guidance on how to get involved, as well

This piece was published in cooperation with The Conversation, an independent, nonprofit publisher of commentary and analysis, authored by academics on timely topics related to their research.

This MFP Voices essay does not necessarily represent the views of the Mississippi Free Press, its staff or board members. To submit an essay for the MFP Voices section, send up to 1,200 words and factcheck information to azia@mississippifreepress.org. We welcome a wide variety of viewpoints.

Photo by Caleb Condit and Rebecca Norden It’s Valentine’s Day month, but fancy chocolate deserves to be enjoyed year-round. We visited chocolatiers around the … END_OF_DOCUMENT_TOKEN_TO_BE_REPLACED

Posted on December 1, 2022 Overland Park now has more access to information about its Police Department than ever, thanks to a library of online transparency-focused … END_OF_DOCUMENT_TOKEN_TO_BE_REPLACED

The annual Beard Awards semifinalists nominations were just released and Kansas City’s food and drink scene has something to celebrate. The KC area has seven semifinalists by our count, including two … END_OF_DOCUMENT_TOKEN_TO_BE_REPLACED

As we look ahead to 2023, let’s take time to reflect on 2022, another busy year in our community. Here are just a few highlights of the many programs, events and services the City provided this … END_OF_DOCUMENT_TOKEN_TO_BE_REPLACED