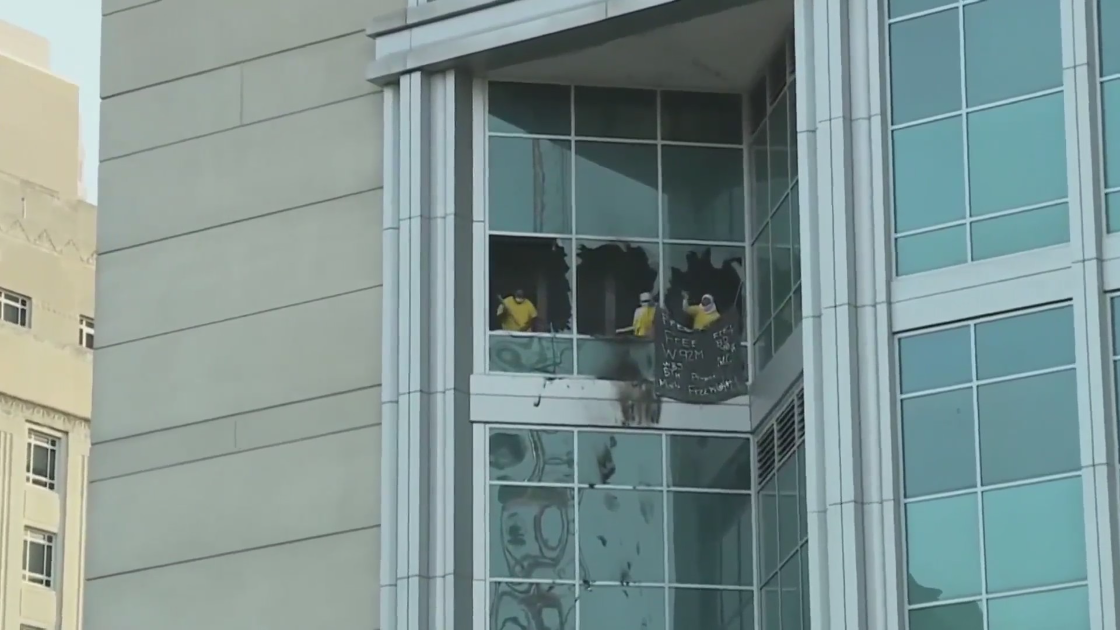 ST. LOUIS – Corrections officers warned a riot inside the St. Louis Justice Center would happen. Video of inmates breaking the glass from inside have shocked you, but officers say that’s what it’s looked like inside the jail for a long time.

One former officer and one current officer talked to FOX 2 about the area you could see that inmates breached. They said it’s a designated safe zone for officers – a cage for officers to be protected in a riot. It’s the only place officers say there’s access to outside windows, yet they say it’s an area they haven’t had access to for years.

“There hasn’t been a key for 10-plus years,” said former corrections officer Destiny Strickland.

Strickland said once inmates were in the area with the broken windows, they had control of the entire floor. She said inmates have always been able to escape their own cells.

Top story: MoDOT and IDOT ask drivers to stay home if at all possible

Strickland said officers can stop it but many are not making their required rounds to check.

“Some of them are scared to walk around the inmates, like to make sure that they’re safe or secure or alive,” she said.

A current officer confirmed this to FOX 2, while only speaking anonymously in fear of being fired for talking. The current officer said administration will often blame fear of COVID for not doing their job.

“One officer was informed there was drugs and many weapons inside a unit, was told that, informed that by another inmate,” the officer said. “That information was given to the captain who said because of COVID they could nothing about that. Just be safe.”

Strickland said that culture of fear might mean an inmate isn’t properly protected or does not get something they request – like covers for the night. She believes administration could easily crack down by watching jail videos.

“You can’t even whisper without them hearing what you’re saying,” she said.

Yet access to videos and to the jail has been denied to FOX 2 and to defense attorneys like Matthew Mahaffey of the Missouri State Public Defender’s Office.

“I’m very concerned at this point based on the intensity and consistency of the presentations our clients have given us,” he said.

The city called complaints a “false narrative” in a denial letter from the City Counselor’s Office.

“Transparency would seem to be super important in this and in all other instances where state actors are suggesting one narrative and those that they’re responsible for with less power are suggesting that other things are going on,” Mahaffey said.

The new jail task force will reportedly get access to the jails. An 8-member panel is scheduled to meet for the second time tomorrow.

Our investigation also continues, as this is just the beginning of what we’ve learned. Wednesday night, we’ll tell you why officers believe there are more drugs and weapons inside than ever as we look into a mysterious jail death.

Shanita McAfee-Bryant knows the recipe for success. From creating new recipes within her family’s kitchen to winning Cutthroat Kitchen, a popular Food Network game show, McAfee-Bryant looks to use her … END_OF_DOCUMENT_TOKEN_TO_BE_REPLACED

For forty years, the low-slung but striking Vine Street stone buildings on the periphery of Kansas City’s historic Jazz District have sat vacant, boarded up, surrounded by a chain-link fence and … END_OF_DOCUMENT_TOKEN_TO_BE_REPLACED

Illustration by Makalah Hardy. As the name implies, hot pots are hot. How hot? My server can’t tell the exact temperature of the rich broth tossing dried chiles around at a rolling boil on the … END_OF_DOCUMENT_TOKEN_TO_BE_REPLACED

André’s has been making quiche since 1955, and not originally by choice. “The concept that my grandparents came over here from Switzerland with was exclusively pastries and chocolates—1955 Kansas City … END_OF_DOCUMENT_TOKEN_TO_BE_REPLACED

Rain or shine, something Kansas Citians have been able to count on for the last thirty years is turning to KSHB 41 News and watching chief meteorologist Gary Lezak tell them what to expect. But with … END_OF_DOCUMENT_TOKEN_TO_BE_REPLACED