Notre Dame forward Cameron Biedscheid sits on press row prior to the first half of a NCAA college basketball game between Miami of Ohio and Notre Dame, Friday, Nov. 8, 2013, in South Bend, Ind. (AP Photo/Joe Raymond) 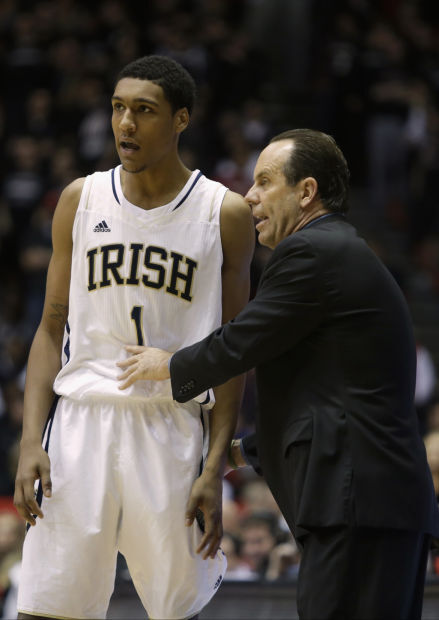 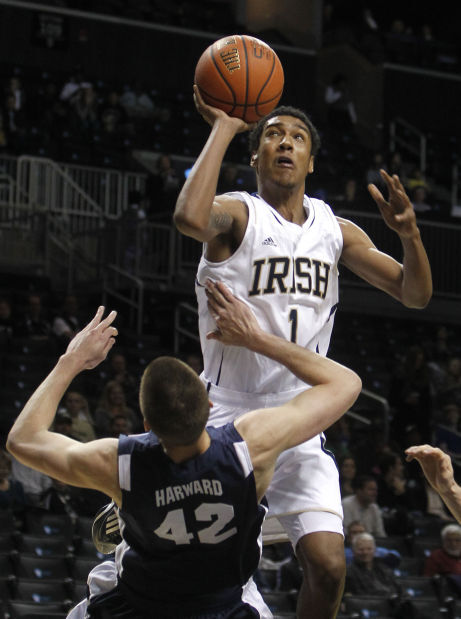 Notre Dame’s Cameron Biedscheid (1) is fouled as he shoots against Brigham Young’s Ian Harward (42) during the first half of their NCAA college basketball game in the consolation round of the Coaches vs. Cancer Classic at the Barclays Center, Saturday, Nov. 17, 2012, in New York. (AP Photo/Jason DeCrow)

A 2012 Cardinal Ritter graduate, Biedscheid, 27, was among the most talented basketball players to emerge from the area in the past 20 years.

Biedscheid was killed just before 11 p.m. in the 6800 block of Champaigne Drive, police said, the same block where he lived. He was pronounced dead at the scene.

As a senior at Cardinal Ritter, the 6-foot-7 Biedscheid was named the Post-Dispatch All-Metro player of the year, Mr. Show-Me Basketball by the Missouri Basketball Coaches Association, Missouri’s Gatorade Player of the Year and a Parade All-American. He averaged 31.7 points, 9.6 rebounds, 3.4 assists, 2.2 steals and 1.6 blocks per game that season.

Biedscheid signed with Notre Dame and spent his freshman season with the Big East program, averaging 6.2 points and 1.4 rebounds in 34 games. He redshirted to start his sophomore season, then transferred in December 2013 to the University of Missouri to play for coach Frank Haith. Biedscheid was dismissed from the Tigers by coach Kim Anderson prior to the 2014-15 season.

Here are sixteen great things to do in Kansas City this weekend, November 24-27, including A Christmas Carol, the Plaza Lighting Ceremony, and a holiday pop-up at Boulevard. Monet & Friends Alive  … END_OF_DOCUMENT_TOKEN_TO_BE_REPLACED

Jayla Williams is one of the first students to take college classes for UMKC for free/Courtesy photo Kansas City public high schoolers are in for a ride—to college, for free. The … END_OF_DOCUMENT_TOKEN_TO_BE_REPLACED

Fresh hand-made cappelletti/Courtesy of Zero Zero Mitch Fagan is a bit of a purist when it comes to crafting pasta by hand. His traditionalist mentality formed during his many trips … END_OF_DOCUMENT_TOKEN_TO_BE_REPLACED

Posted on November 21, 2022 The Kansas Chapter of the American Planning Association has recognized Downtown Overland Park as a Great Place in Kansas. ​​Great Places awards … END_OF_DOCUMENT_TOKEN_TO_BE_REPLACED

Annel Alvarez has been dancing Folklórico since she was five years old, but it wasn’t always the KCK native’s passion. Folklórico is a traditional cultural dance in Mexico and Central America that … END_OF_DOCUMENT_TOKEN_TO_BE_REPLACED