Emmett Williams’ new documentary opens on the quiet of a Maplewood church.

Over the years, the 52-year-old filmmaker has trained his camera on a wide variety of topics in locations across the United States and beyond. Struggling commercial fishermen in Alaska. Protesters at Standing Rock. Illegal logging in the Amazon.

For The Garcia Family, Williams returned to St. Louis, where he grew up and went to high school, to tell the story of Alex Garcia, who took sanctuary from deportation more than three years ago in Christ Church. After an establishing shot of the building, the documentary cuts to the married father of five, who is visibly holding back emotion as he discusses the decision to live there in a basement apartment.

“At first, I didn’t think it would take so long, but no, I’m still here,” Garcia says in Spanish, adding that there was a time that he thought of fleeing with his family, who are all citizens, but he knew that they would be caught and separated. “I just can’t abandon my family.”

The short documentary, which clocks in at just under 30 minutes, is packed with candid moments as Williams trails along with the laconic Garcia and his wife Carly, who has become a fierce advocate not only for her husband, but for changing a U.S. immigration system that has left their family and others in impossible situations.

Williams, a Parkway Central High School grad, has been a documentary filmmaker for more than a dozen years through his company Mission Man Media. He worked as a print journalist after leaving the University of Missouri and eventually landed in New York City as a freelancer. He was looking for a way to make some money when a friend invited him to work on the TV show Who Wants to Be a Millionaire? That led to nearly a decade in television, but he began to feel the pull of other projects.

“I decided that there was a bunch of stories that I wanted to tell, and the way to do that was to quit TV and become a documentary filmmaker,” he says.

One of his first projects was a film on native families in Alaska. Williams later created a web series called Fargesn which told personal stories a year after Michael Brown’s death. He is now in Rio de Janeiro making a documentary on the innovative architecture of the favelas.

Each time he begins a new project, he says, he has to earn the trust of the people he’s filming.

“With all these things, it’s people who are tired of being exploited,” he says.

He learned about the Garcias from his longtime friend Jen Rich, whom he met as a kid during summers in the Ozarks at Camp Sabra. Now a fellow filmmaker, Rich had read about the family and urged Williams to return to St. Louis and make a documentary about them. He flew in almost immediately and slept on her couch while filming. Rich signed on as a producer. 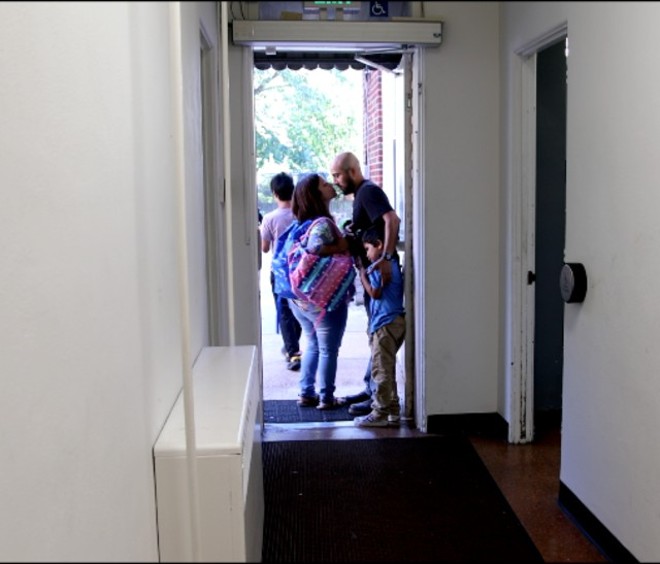 At first, the Garcias were extremely apprehensive, Williams says. They made the decision in 2017 to go public with the sanctuary decision. Since then, they have been the subject of multiple stories, including features in the Riverfront Times as well as long pieces in national publications. Carly Garcia and the couple’s children have participated in demonstrations and marches, and the family has tried to highlight the inequities of the U.S. immigration system with online rallies and petition drives.

But it has all been a calculated risk, one that could have just as easily enticed the Trump administration to abandon the U.S. Immigration and Customs Enforcement agency’s longtime practice of avoiding sensitive locations, including churches, when taking people into custody to be deported. Garcia had been caught crossing the border as a teen and deported. He entered again not long after and had lived in Poplar Bluff, working and raising his family until 2017 when he moved into the Maplewood church.

Even before 2017, he had hoped to gain permanent residency, but the deportation order from nearly two decades ago remains on his record, blocking the path. And as the Garcias saw Trump separating families at the border, caging children and denying refugees access to the United States, they worried agents could show up any day at the church.

It is always at least a little awkward to have a filmmaker tagging along, and given the circumstances, Williams understood the family’s concerns about allowing him in.

“But as they trusted me, it was like this floodgate of emotion — and just sincerity about not only what they’re going through, but they’re really honest about how hard things are for them,” Williams says. “To keep going through that was just amazing to be a part of.”

The film uses a seven-mile march from downtown St. Louis to the church on the second-year anniversary of Alex Garcia’s move into sanctuary as the narrative spine, but Williams weaves in intimate scenes of Carly and the kids at home without Alex, a lobbying trip to Washington to press lawmakers for reforms, and fly-on-the-wall views of life in the church.

He found that in the Garcias.

“It was their honesty and drive in the face of going through so much,” Williams says.

He is now preparing for film festivals, but a limited video-on-demand release has already been well received, and he’s begun licensing the film to universities, including Saint Louis University for use in classes.

And even though the filming is over, Williams says he’ll continue to care about the Garcias and hope Alex is able to move out of the church soon. He and the family have become friends through spending so much time together.

“For me, it’s such a gift to be able to film other people’s lives,” he says. “I can’t see that connection ending after the film is over.”

The Garcia Family is available for rent online until February 28. Half of the proceeds will go to the Garcias. More information about Emmett Williams’ films is available online at Mission Man Media.

Next year Worlds of Fun will reach fifty years of business, and to celebrate it is bringing back one of its most legendary roller coasters: the Zambezi Zinger. At the time of Worlds of Fun’s opening … END_OF_DOCUMENT_TOKEN_TO_BE_REPLACED

Standing in the same location since 1857, the City Market is nearly as old as Kansas City itself. In the 1850s, over three hundred steamboats traveled on the Missouri River—including the Arabia before … END_OF_DOCUMENT_TOKEN_TO_BE_REPLACED

At 6 p.m. this Friday at the Kauffman Center, TEDxKC will have a lineup of ten speakers whose expertise range from a sky full of stars to the key to happiness to a MacArthur Genius. The theme is … END_OF_DOCUMENT_TOKEN_TO_BE_REPLACED

Mesoamericans called it food of the gods. From central Mexico down to Honduras, where the cacao tree grows native, ancient Olmecs, Mayans and Aztecs would gather the oblong fruit and break open its … END_OF_DOCUMENT_TOKEN_TO_BE_REPLACED

The definition of “comfort food” tends to vary depending on who you ask. At two new Brookside restaurants, Brady & Fox and Earl’s Premier, the term applies both to time-honored Irish recipes and East … END_OF_DOCUMENT_TOKEN_TO_BE_REPLACED