One shows a group of men in county sheriff’s jackets standing in front of a combine. In another, two men inspect plowing equipment on a flatbed truck.

“That’s when they loaded up my machinery,” Bates said. “They sold our machinery first. Then they sold the land.”

In the early 1980s, weather wiped out the crops on his 950-acre farm in Nicodemus, the last remaining African American settlement west of the Mississippi River. Bates tried to get his loans extended to make it to the next season. But he was denied.

Among the papers on his desk sits an affidavit from the president of the regional credit association that says he denied Bates the help he needed deliberately to push him out of farming.

A new federal effort plans to send more debt relief payments to Black farmers in recognition of how the USDA and local farm credit offices denied generations of people like Bates loans and foreclosed on their properties, effectively transferring farmland to their white neighbors. But for many, the money will be too late to reverse the decades of damage caused by discrimination in farming.

Bates wrote letters detailing the discrimination to Senator Bob Dole, President Ronald Reagan and the U.S. Department of Agriculture. They did him no good. His lenders foreclosed. All he could do was watch his family farm, his tractor and even the wheat he had harvested get taken away.

“My wife tells everybody if I’d had a gun, I probably would’ve shot somebody,” Bates said. “I worked hard all year and then stood there and watched them steal wheat all night long.”

He was one of the original plaintiffs on a landmark discrimination settlement in the 1990s, Pigford v Glickman, that was supposed to send more than $1 billion to Black farmers who had been treated unfairly by the USDA. 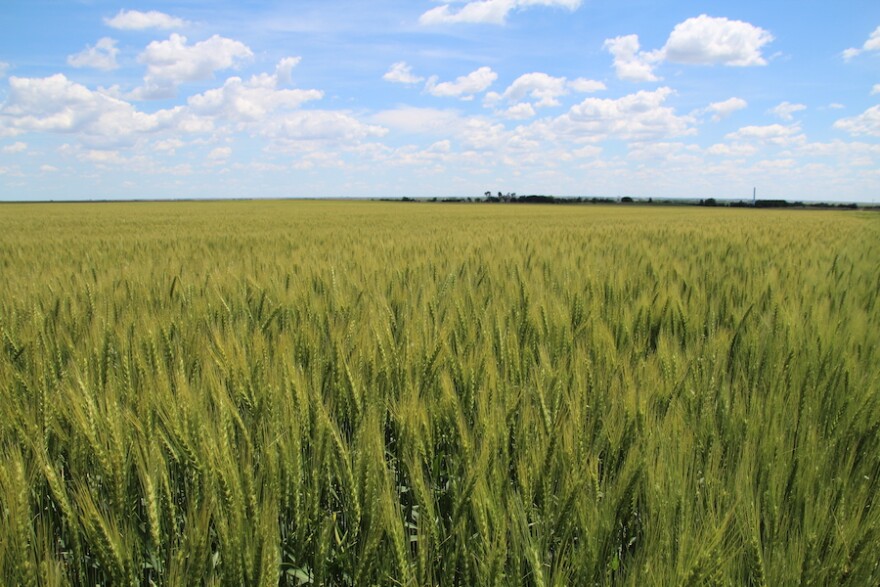 Wheat grows in a northwest Kansas field with the town of Nicodemus in the distance. (Photo by David Condos, Kansas News Service)

The loss of Black-owned farmland is profoundly felt in this part of northwest Kansas, where hundreds of African American homesteaders built their own agricultural community following emancipation in the 19th century. For Angela Bates, Bernard’s cousin who now leads the Nicodemus Historical Society, the land here represents more than just soil and crops.

“It reflects what African Americans did with their freedom,” Bates said. “This was the promised land.”

At the time, Nicodemus was one of many all-Black settlements that formerly enslaved people formed on the frontier from Oklahoma to Wyoming. In Kansas alone, more than 40,000 African Americans, referred to at the time as exodusters, made similar journeys and built a dozen Black farming colonies.

“When you think about farming in the historical context of African Americans and migration,” Bates said, “what you see is the land is the draw.” 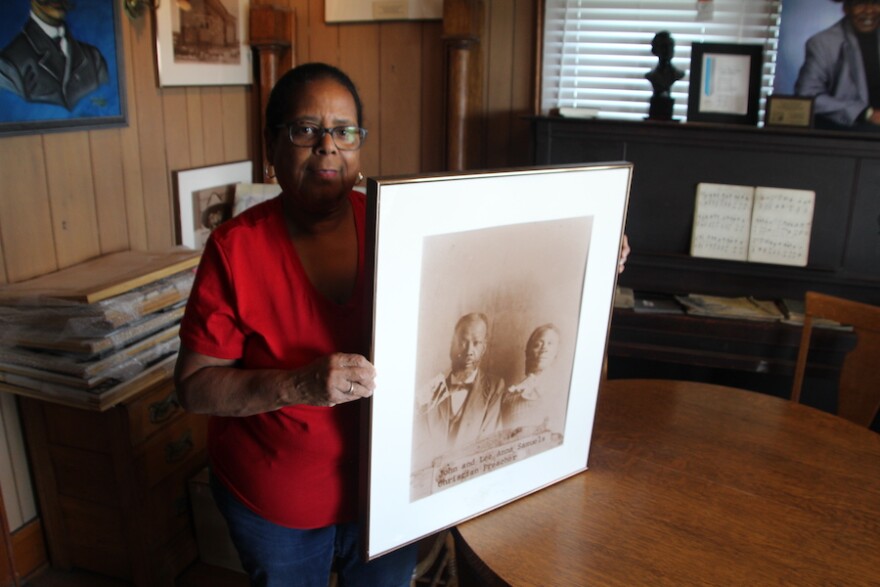 Angela Bates holds a picture of her great-great-great-grandparents, John and Lee Anna Samuels, who settled in Nicodemus after their emancipation from slavery. (Photo by David Condos, Kansas News Service)

But in Nicodemus and other communities across the U.S., that land steadily slipped out of African American hands. Bates said the area was home to nearly 150 Black farmers a century ago. Today, none of Nicodemus’s residents actively farm. And only a few Black farmers in neighboring towns are still going.

”The land loss has just been tremendous,” said JohnElla Holmes, who lives in Nicodemus and heads the Kansas Black Farmers Association. “It’s a loss of legacy.”

On a gravel road north of town, Holmes looks over the expansive prairie that Black homesteaders, including her great-great grandfather, settled here in 1877. Nicodemus is barely visible along the horizon as a line of small white homes and a skinny blue water tower.

“All of this was Black-owned at one time, six by six miles,” Holmes said, waving her hand over a field of golden wheat. “It’s as far as you can see.”

At its peak, the Nicodemus area was home to some 600 people. But like many other families who once owned homesteads here, Holmes’s parents sold their land long ago because of discrimination that blocked her father from getting the funds he needed to keep the farm running.

When Holmes moved back to town six years ago, she was one of only 15 residents. 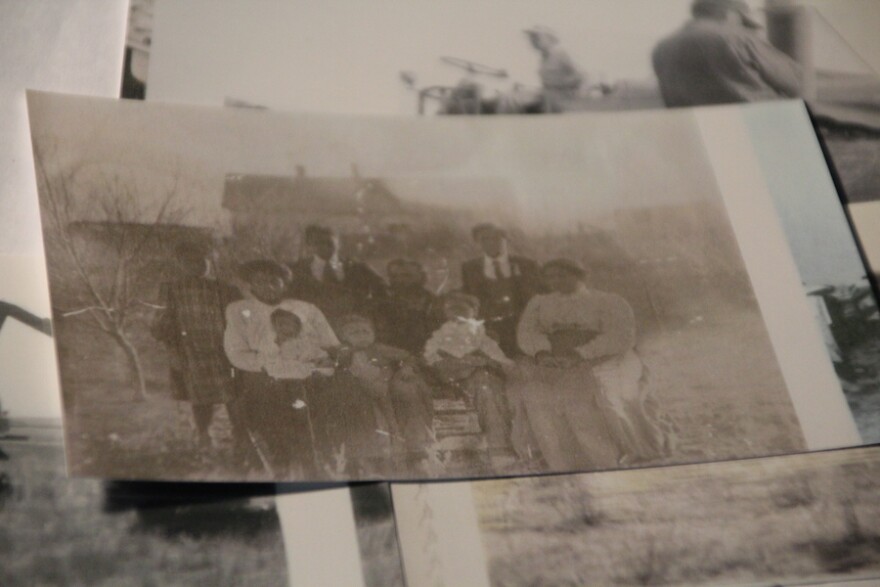 A photograph of Bernard Bates’s father as a child with his family on their Nicodemus farm in the early 1900s. (Photo by David Condos, Kansas News Service)

It’s a pattern that’s repeated across the country. One hundred years ago, Holmes said Kansas was home to upward of 150,000 acres of Black-owned farmland. That number’s now closer to 10,000 acres.

Nationwide, Black farm ownership peaked in 1910, when nearly one million Black farmers had between 16 and 19 million collective acres. Since then, about 90% of it has been lost — a chunk of land roughly the size of West Virginia. At the same time, the amount of farmland owned by white farmers has increased. Today, fewer than 50,000 African Americans continue to farm.

“If something is not done in the next few years,” Thomas Mitchell, a Land Loss and Reparations Project researcher, said, “30 years from now, we could literally be talking about there’s only a few hundred Black farmers left in this country.”

Thomas Mitchell teaches law at Texas A&M University and has worked with Black farmers across several states for the past 25 years. In that time, he said he’s heard from farmer after farmer driven off their land by systemic discrimination by the USDA and local loan offices where the agency hands jurisdiction over to county committees, which have been historically white.

Many African Americans haven’t been able to buy land or the equipment they need to operate a farm because they were repeatedly denied credit for bogus reasons. Some applied for loans to buy seed, but were slow-walked so badly they missed the planting season. Others weren’t able to obtain a loan application at all.

“This wasn’t the exception to the rule. This wasn’t a bug,” Mitchell said. “This was a feature of the system.” 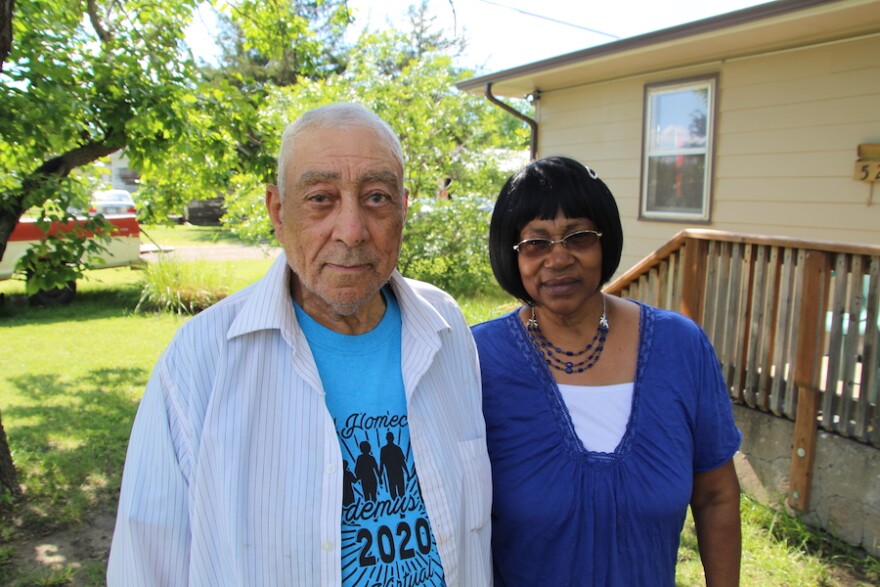 Bernard Bates, who lost his farm after facing discriminatory lending practices, stands with his wife, Ava, outside their home west of Nicodemus. (Photo by David Condos, Kansas News Service)

The discriminatory practices against Black farmers aren’t a new revelation. The USDA’s role in pushing Black farmers out of agriculture has been well documented in the federal government’s own reports over the past several decades.

For example, a report from 1982 described “extensive deficiencies” in how the USDA’s farm credit arm treated Black farmers. It detailed widespread instances of the USDA offering Black farmers fewer loans, smaller loans and higher interest rates when compared to their white counterparts.

The report concluded that ongoing discrimination “could result in the extinction of Black farms in this country if immediate measures are not taken to counter the biases presently built into the system.”

But little seemed to change. In the years following that 1982 report, slashed budgets, staff turnover and poor leadership led the USDA’s civil rights program to grind to a halt. A Washington Post report from that time says the agency stopped looking into discrimination complaints entirely.

“The USDA actually acknowledged that with several of the claims,” Mitchell said, “they literally threw them in the garbage can.” 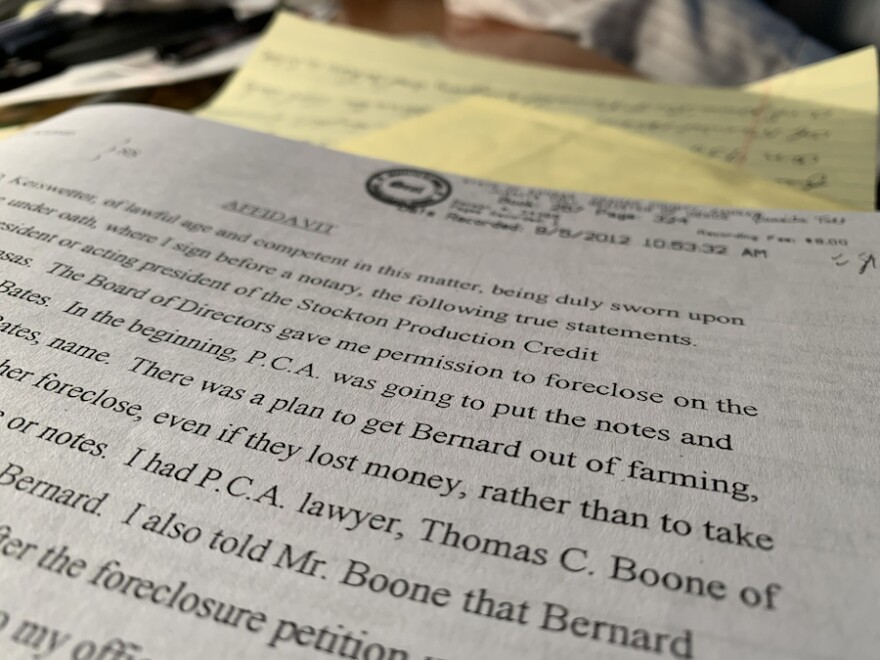 In recent years, there have been some efforts to reckon with the USDA’s checkered past — at least on the surface. During his previous tenure under the Obama Administration, current Secretary of Agriculture Tom Vilsack heralded the USDA’s recent turnaround as a “new era for civil rights” and claimed that he had overseen a 12% increase in the number of Black farmers.

But an investigation by Harvard Food Law and Policy Clinic research fellow Nate Rosenberg revealed that the department has misled the public by changing the methodology of its census to show a false uptick in Black farming.

“They portrayed it in a completely irresponsible way,” said Rosenberg, who is also lead researcher with the Land Loss and Reparations Project. “And they still do.”

Rosenberg said that has led to a perception that discrimination against Black farmers as a thing of the past and has made it even more challenging for farmers to get their concerns taken seriously. His two-year investigation into the USDA’s practices under Vilsack found that the agency continued to foreclose on Black farmers with unresolved civil rights complaints and failed to properly address new complaints that came in.

“There was a perception that the Vilsack administration was addressing it,” Rosenberg said, “when, in fact, it was getting worse.” 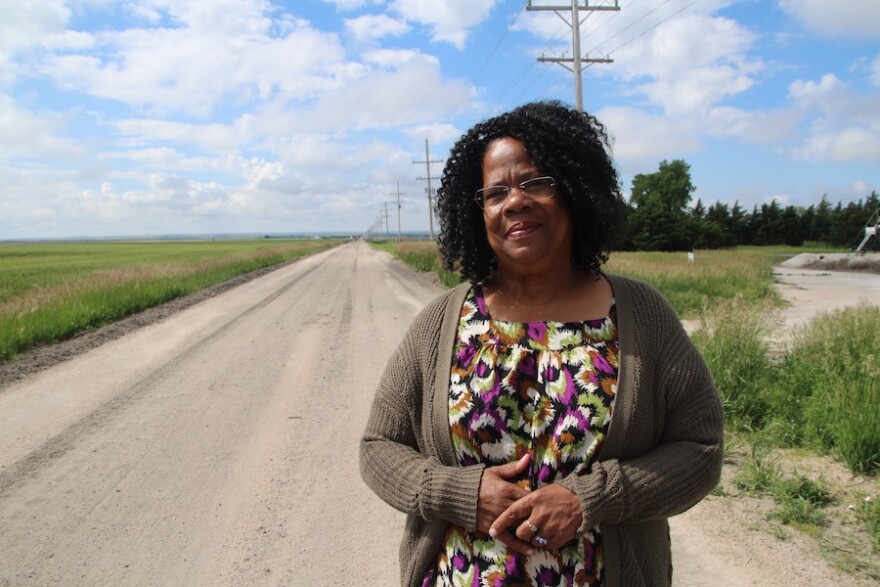 JohnElla Holmes, president and executive director of the Kansas Black Farmers Association, stands next to a piece of farmland north of Nicodemus. (Photo by David Condos, Kansas News Service)

The new federal debt relief program within the American Rescue Plan slated to launch this month is intended to start righting some of those wrongs. It includes an estimated $4 billion to pay off some outstanding debts marginalized farmers owe the federal government.

But Mitchell, the Texas A&M law professor, said that while $4 billion might sound like a lot, his team’s preliminary research estimates that the actual amount of wealth removed from Black communities as a result of lost farmland adds up to at least $300 billion. So even if this new relief program does end up putting money in some Black farmers’ pockets, it won’t even the score.

“It doesn’t represent anything approaching a remedy that would make Black farmers whole,” Michell said. “I mean, not even close.”

And it’s still unclear whether or not the effort will come to fruition.

A federal judge issued a temporary order halting the debt relief in response to a lawsuit filed by a conservative law firm in Wisconsin and a group of white farmers. And that’s not the only federal lawsuit that’s been brought by white farmers who say the program discriminates against them. Banks are also pressuring the USDA to rethink the plan, arguing that it would cut into their profits from interest payments. 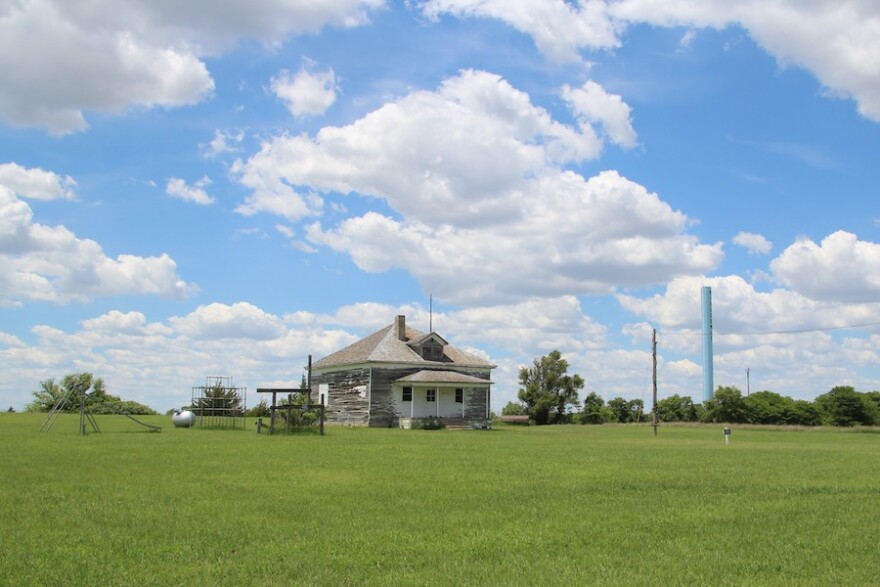 The District No. 1 Schoolhouse is now part of the Nicodemus National Historic Site. (Photo by David Condos, Kansas News Service)

JohnElla Holmes, the head of the Black farmers group, said her organization has received threats from people outraged at the idea of handouts going to farmers of color.

Yet she figures only a quarter of the farmers she works with will even be eligible for compensation. She said the decades of being denied federal farm loans pushed many Black farmers to seek private loans from banks, and those aren’t covered as part of this debt relief program.

Even among the Kansas farmers who are eligible, Holmes said many of them are skeptical about signing up. So, she has been seeking them out and trying to persuade them that the program offers at least a chance of shoring up their family farms for the future.

“Do I want handouts? Absolutely not,” Holmes said. “I just want to be treated fairly, and put in a position where we can be at least on the football field.”

David Condos covers western Kansas for High Plains Public Radio and the Kansas News Service. You can follow him on Twitter @davidcondos.

Photo by Caleb Condit and Rebecca Norden It’s Valentine’s Day month, but fancy chocolate deserves to be enjoyed year-round. We visited chocolatiers around the … END_OF_DOCUMENT_TOKEN_TO_BE_REPLACED

Posted on December 1, 2022 Overland Park now has more access to information about its Police Department than ever, thanks to a library of online transparency-focused … END_OF_DOCUMENT_TOKEN_TO_BE_REPLACED

The annual Beard Awards semifinalists nominations were just released and Kansas City’s food and drink scene has something to celebrate. The KC area has seven semifinalists by our count, including two … END_OF_DOCUMENT_TOKEN_TO_BE_REPLACED

As we look ahead to 2023, let’s take time to reflect on 2022, another busy year in our community. Here are just a few highlights of the many programs, events and services the City provided this … END_OF_DOCUMENT_TOKEN_TO_BE_REPLACED