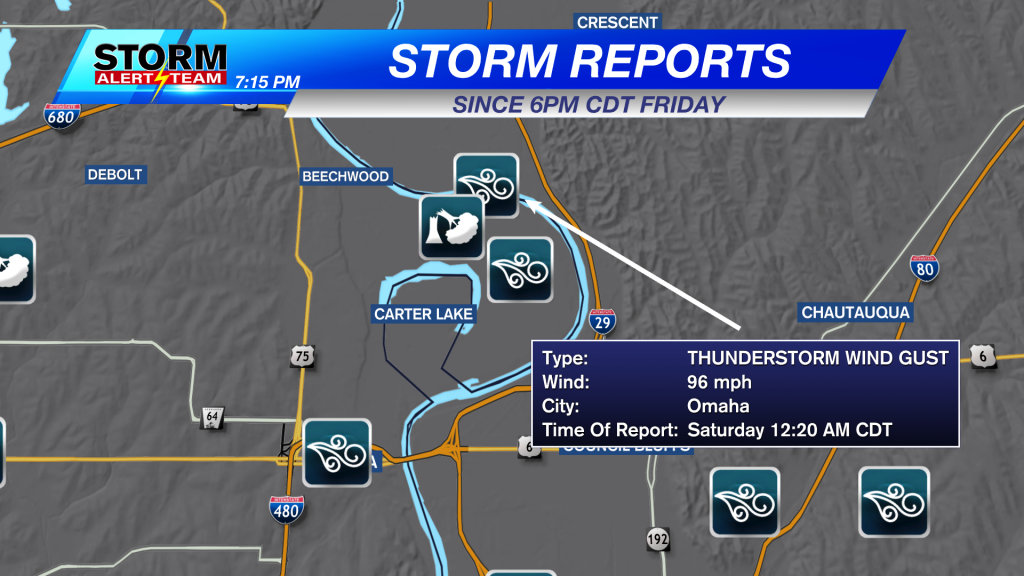 The intense wind stemmed from an organized complex of thunderstorms. Meteorologists refer to this type of storm as a Mesoscale Convective System – or an “MCS” for short. Radar imagery at 12:20 AM shows the MCS knocking on Eppley airfield’s doorstep. The extreme winds arrived right as the heavy rain did.

There were also reports of damage at the airport as a result of these winds. The National Weather Service issued a storm report stating that “…a small FedEx cargo aircraft was blown across [the] tarmac and onto its side along the airport property fence line.” This occurred shortly after 12:20 AM Saturday.

Lincoln fared better in terms of winds on Friday night. Lincoln Municipal Airport recorded a 64mph gust at 12:16 AM Saturday – the highest gust of the evening.

Photo by Caleb Condit and Rebecca Norden It’s Valentine’s Day month, but fancy chocolate deserves to be enjoyed year-round. We visited chocolatiers around the … END_OF_DOCUMENT_TOKEN_TO_BE_REPLACED

Posted on December 1, 2022 Overland Park now has more access to information about its Police Department than ever, thanks to a library of online transparency-focused … END_OF_DOCUMENT_TOKEN_TO_BE_REPLACED

The annual Beard Awards semifinalists nominations were just released and Kansas City’s food and drink scene has something to celebrate. The KC area has seven semifinalists by our count, including two … END_OF_DOCUMENT_TOKEN_TO_BE_REPLACED

As we look ahead to 2023, let’s take time to reflect on 2022, another busy year in our community. Here are just a few highlights of the many programs, events and services the City provided this … END_OF_DOCUMENT_TOKEN_TO_BE_REPLACED