Former Minneapolis police officer Derek Chauvin had been trained twice over the past four years on how to defuse tense situations with people in crisis and how police must use the least amount of force necessary to get someone to comply, police personnel testified Tuesday during the seventh day of his trial.

Chauvin, 45, is standing trial on murder and manslaughter charges in connection with the May 25, 2020 death of George Floyd. Floyd, a 46-year-old Black man, died after Chauvin allegedly held his knee against Floyd’s neck for 9 minutes and 29 seconds, despite his shouts that he couldn’t breathe – seen in moments captured on video.

Police were responding at the time to reports that Floyd had tried to use a counterfeit $20 bill to buy a pack of cigarettes at a neighborhood convenience store.

The former cop’s attorney, Eric Nelson, has largely argued that Chauvin was following his training and that it was Floyd’s use of illegal drugs and his underlying health conditions – not the officer’s knee – that killed him. He has also recently questioned at trial whether Chauvin’s knee was on Floyd’s neck, or if it was actually on his shoulder.

On Tuesday, Sgt. Ker Yang, the Minneapolis police official in charge of crisis-intervention training, and use-of-force instructor Lt. Johnny Mercil became the latest department members to testify as part of an effort by prosecutors to discredit Nelson’s argument that Chauvin was doing what he was trained to do when he put his knee on Floyd’s neck.

Yang said officers are taught to make critical decisions in dealing with people in crisis, including those suffering mental problems or the effects of drug use, and then deescalate the situation. Prosecutor Steve Schleicher said records show that Chauvin attended a 40-hour course on the method in 2016.

“When we talk about fast-evolving situations … a lot of the time we have the time to slow things down and reevaluate and reassess and go through this model,” Yang said.

Records also show that Chauvin took in-service training in the use of force in October 2018. Mercil said those who attended were taught that the sanctity of life and protection of the public are the cornerstones of the department’s use-of-force policy.

He also said officers were taught that restraint is considered force and that they must use the least force required because “it’s safer and better for everybody involved.”

Schleicher showed a still image taken from bystander video of Chauvin with his knee on Floyd’s neck – one that jurors have seen several times – and asked Mercil: “Is this a use of force?”

Mercil said officers are trained in how to get control of a suspect by using their arms on the side of a person’s neck to slow blood flow to the brain. He said officers are not taught to use their legs or knees, though a knee on the neck can happen depending on a person’s resistance.

Schleicher asked if the neck restraint could be used if the person was under control and handcuffed.

“I would say no,” Mercil said.

He said that if officers are applying handcuffs on someone in a prone position, they are taught to use a knee on the person’s shoulder to isolate the arm.

Floyd, who had taken drugs, frantically struggled with officers who tried to put him in their squad car, saying he was claustrophobic. Prosecutors said Chauvin continued to kneel on Floyd’s neck for 9 minutes and 29 seconds, after he was handcuffed behind his back and lying on his stomach, even though Floyd said 27 times that he could not breathe.

Nelson has argued that Chauvin “did exactly what he had been trained to do over his 19-year career” and that it was Floyd’s use of illegal drugs and his underlying health conditions – not the officer’s knee – that killed him.

Nelson has further argued that police at the scene were distracted by what they perceived as a growing and increasingly hostile crowd of onlookers.

Under questioning from Nelson, Yang testified that people watching an arrest may also be in crisis and that officers have to take in the situation around them as well.

Instead of protecting a fellow officer in what is sometimes called the “blue wall of silence,” some of the most experienced members of the Minneapolis force – including the police chief and the head of the homicide division – have taken the stand to openly condemn Chauvin’s treatment of Floyd.

On Monday, Minneapolis Police Chief Medaria Arradondo testified not only that Chauvin, a 19-year veteran of the force, should have let Floyd up sooner, but that the pressure on Floyd’s neck did not appear to be light to moderate, as called for under the department’s neck-restraint policy. He also said Chauvin failed in his duty to render first aid before the ambulance arrived, and that he violated policy requiring officers to deescalate tense situations if they can to avoid or minimize the use of force.

Arradondo, the city’s first Black chief, fired Chauvin and three other officers the day after Floyd’s May 25 death. In June, he called it “murder” in response to an inquiry from the Star Tribune.

In response to questions and a data request from the Star Tribune, Arradondo issued a statement in June saying: “Mr. George Floyd’s tragic death was not due to a lack of training – the training was there. Chauvin knew what he was doing.”

Arradondo went on to say: “The officers knew what was happening – one intentionally caused it and the others failed to prevent it. This was murder – it wasn’t a lack of training.”

During cross-examination, Nelson raised the question about “camera-perspective bias,” with which Arradondo said he was not familiar. 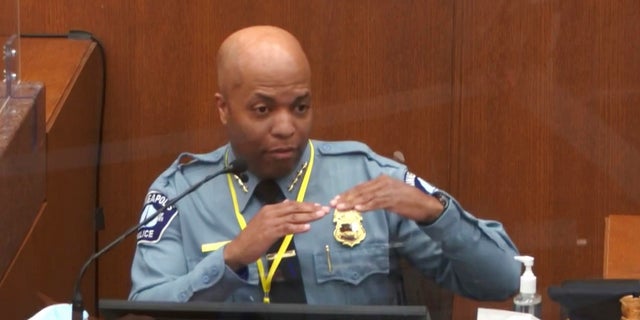 Nelson played for Arradondo bystander video from the crime scene, which showed Chauvin’s knee on Floyd’s body, and then played a second video from a different angle in the same moments before and while Floyd was being placed on a gurney.

The defense attorney then showed both camera views simultaneously and asked: “From the perspective of [bystander] Ms. [Darnella] Frazier’s camera, it would appear that Officer Chauvin’s knee is on the neck of Mr. Floyd.”

Arradondo said yes. Then, Nelson referenced the second video, showing the officer’s body camera footage, and asked: “Would you agree that from the perspective of Officer Kueng’s body camera that it appears that Offcer Chauvin’s knee was more on Mr. Floyd’s shoulder blade?”

Floyd’s younger brother Philonise Floyd, of Houston, has attended several days of the trial to bear witness on behalf of his family. Any additional Floyd family members present must watch from another room, and they’re getting support from outside the courtroom.

While admission to the courthouse is strictly limited, civil rights attorney Benjamin Crump, who represents the Floyd family, and the Rev. Al Sharpton were seen there Tuesday morning with some members of the Floyd family, waiting for an elevator, according to reporters there. Gwen Carr, the mother of the late Eric Garner, was with them. Sharpton, Crump and Carr held a prayer vigil with members of the family outside the courthouse during the midday break Tuesday.

Fox News’ Danielle Wallace contributed to this report, as well as the Associated Press.

The pandemic threw a wrench in many people’s holiday shopping. What used to be trips to stores and markets with the family to find the perfect gift turned into Amazon wish lists and online gift cards. … END_OF_DOCUMENT_TOKEN_TO_BE_REPLACED

Rhonda LeValdo travels from Lawrence to Kansas City for every Chiefs home game, but she’s never actually been inside Arrowhead Stadium. Instead, she stands by a bus stop at the corner of Red Coat Lane … END_OF_DOCUMENT_TOKEN_TO_BE_REPLACED

For eighty years, a story has remained buried under the tales of the great men of Kansas City jazz, from Count Basie to Charlie Parker. Living and playing alongside them was another legend, pianist … END_OF_DOCUMENT_TOKEN_TO_BE_REPLACED