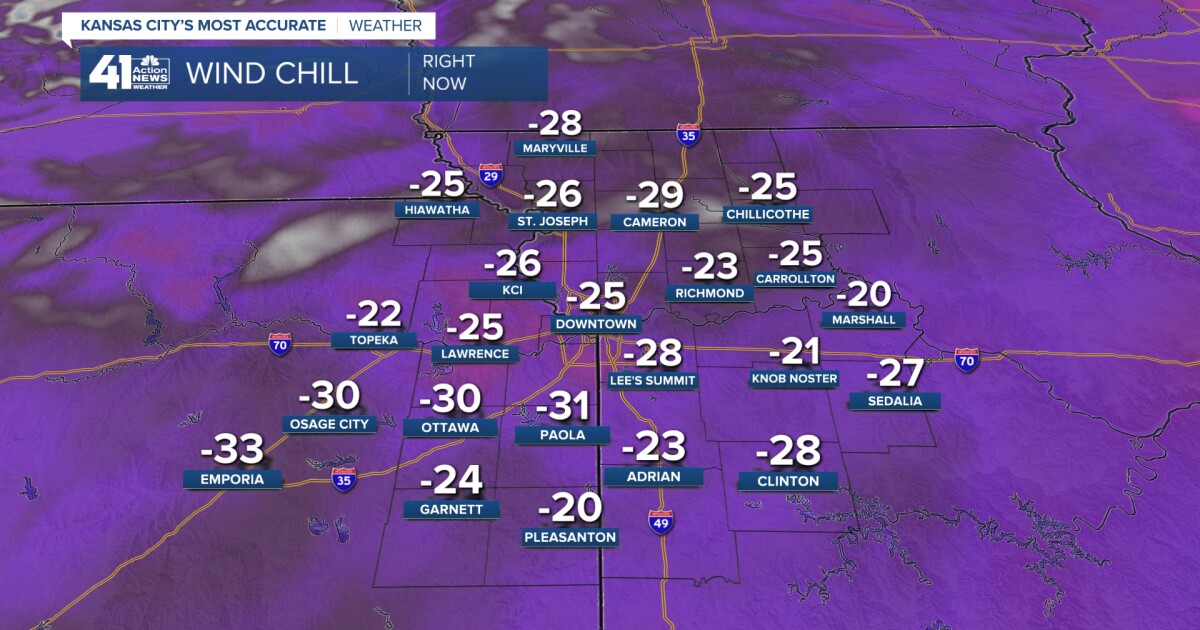 KANSAS CITY, Mo. — 8:30 a.m. | Snow has moved into much of the Kansas City area and could worsen road conditions.

The snow has become more widespread over the last 30 minutes! The light, fine snow lingers into the afternoon resutling in an additional dusting-1″ around KC, higher totals east! pic.twitter.com/XSnxRQIt7l

KCI is now reporting -32° F wind chill, this is the lowest wind chill calculated at KCI since 12/23/1989. Please, please, bundle up if you have to be out this morning. #KC

ORIGINAL STORY | Kansas City, and much of the nation, faces record-breaking and dangerous cold Monday.

The high temperature in Kansas City is around 0 degrees with wind chills between 20 and 30 degrees below zero, prompting a wind chill advisory. There is also light snow possible throughout the day with accumulations up to 1 inch.

The record low for Feb. 15 was -6 degrees and was set in 1936. A new record low for the date was set Monday morning with a temperature of -8 degrees.

New record low set this morning & more will be in jeopardy through tomorrow! https://t.co/YEteliwbEi

To put that in perspective, Kansas City has only experienced a forecast with a high of 0 degrees or lower 25 times in recorded history, according to the National Weather Service. The last time it was this cold was 1989.

The cold temperatures will prove to be extremely dangerous for people who have to go outside. Kansas City area jurisdictions have provided warming centers, shelters and other resources for those experiencing homelessness or who are in need of some help.

Many school districts have Monday off for President’s Day, but many schools that were supposed to operate switched learning mode or canceled classes due to the dangerous weather conditions.

Anyone who has to make a morning commute should use caution and prepare for the cold. Drivers should have blankets and other emergency cold items in their vehicles in case of a breakdown.

Road temperatures were -3 degrees as of 5:30 a.m. and drivers should watch for patches of black ice as snow continues to blow around.

MORNING COMMUTE: For those headed out the door this morning our road temps are -3.
Be on the lookout for snow, ice & black ice. Give yourself 5-10 extra min.
One crash so far, 4 stalled vehicles.@41ActionNews @DaishaJonesKSHB pic.twitter.com/vza3svR9hj

If possible, all pets should be brought inside homes and out of the cold. If not possible, dog houses should be insulated and packed with straw or another insulator, and access to non-frozen water should be available. Outdoor walks should be limited.

The State of Kansas issued a state of emergency because of the cold to expand resources for those who need them.

Energy companies are asking customers to conserve energy because of the extreme cold by lowering thermostat temperatures, unplugging unused devices and avoiding extended use of gas fireplaces.

The dangerous conditions will continue into Tuesday.

Next year Worlds of Fun will reach fifty years of business, and to celebrate it is bringing back one of its most legendary roller coasters: the Zambezi Zinger. At the time of Worlds of Fun’s opening … END_OF_DOCUMENT_TOKEN_TO_BE_REPLACED

Standing in the same location since 1857, the City Market is nearly as old as Kansas City itself. In the 1850s, over three hundred steamboats traveled on the Missouri River—including the Arabia before … END_OF_DOCUMENT_TOKEN_TO_BE_REPLACED

At 6 p.m. this Friday at the Kauffman Center, TEDxKC will have a lineup of ten speakers whose expertise range from a sky full of stars to the key to happiness to a MacArthur Genius. The theme is … END_OF_DOCUMENT_TOKEN_TO_BE_REPLACED

Mesoamericans called it food of the gods. From central Mexico down to Honduras, where the cacao tree grows native, ancient Olmecs, Mayans and Aztecs would gather the oblong fruit and break open its … END_OF_DOCUMENT_TOKEN_TO_BE_REPLACED

The definition of “comfort food” tends to vary depending on who you ask. At two new Brookside restaurants, Brady & Fox and Earl’s Premier, the term applies both to time-honored Irish recipes and East … END_OF_DOCUMENT_TOKEN_TO_BE_REPLACED