On a recent evening at Meadowbrook Park in Prairie Village, Kansas, triathalon coach Liz Weidling led a handful of athletes through a grueling training session, alternating running laps with turns on stationary bikes. Despite the occasional jokes about the weather, the women seemed barely phased by August heat and humidity.

Brutal late summer temperatures in Kansas City have sent most people scurrying for relief in air conditioned spaces. But Liz Weidling and her all-female training team, the Reds, have continued to push themselves to the limits outdoors.

Many of them specialize in one of the most intense endurance contests in the world: the Ironman Triathlon, in which competitors swim 2.4 miles, cycle 112 miles and run 26.2 miles in a single day.

This near-indifference to stifling heat might seem superhuman, but Weidling explains it’s the result of careful training. When summer first appears, many of her athletes call her in a state of near-panic after what seems to be a sudden decline in their performance.

“I get lots of email and lots of concerns because suddenly workouts are slower,” Weidling says. “Or your heart rate goes up, it’s really uncomfortable. There’s an adjustment period there that I think we all tend to forget.”

Keeping cool creates stress on the bodies, and especially hearts, of both athletes and more vulnerable people, says Lacy Alexander, professor of kinesiology at Pennsylvania State University. As temperatures rise, we are all at greater risk for heat exhaustion or heat stroke.

Sweating cools us off quickly, but Midwestern humidity interferes with that process because it prevents sweat from evaporating — adding even more stress for the body.

For members of the Reds, an all-female triathlon training group in Kansas City, stifling heat and humidity are just additional challenges to train for. Photo credit Carlos Moreno/KCUR 89.3.

Weidling and the Reds are an unusually tough bunch, but they provide evidence of how adaptable the human body can be to heat and humidity. Researchers who study athletic performance say we can all learn ways to help our bodies function better in the heat.

“Humans are really great at doing something called ‘acclimatization,’” says Alexander. “When we are exposed to heat — and we can do this through passive exposure, but it works better if there’s actually some sort of physical stress or some sort of exercise involved — we adapt.”

Though deliberate acclimatization is an annual ritual for endurance athletes, adjusting to extreme summers is becoming an annual routine for all Midwesterners.

Temperatures in Kansas City have swelled to around 100 degree Fahrenheit during several heat waves this summer, and humidity drove the perceived temperatures even higher.

That’s not unusual anymore: Average temperatures have increased by 0.5 degrees Fahrenheit in Missouri since the early 20th century, according to the North Carolina Institute for Climate Studies, and the state has already seen increases in heavy rain events in recent decades.

Across the globe, average temperatures have increased 1.8 degrees since preindustrial levels. The Paris climate accords established a goal of limiting warming to 2.7 degrees, although more recent studies estimate that exceeding this threshold is likely inevitable.

In coming years, summers in Kansas City are expected to be hotter and wetter as well as more erratic. Tracy Twine, an associate professor at the University of Minnesota who studies climate change in Midwestern cities, explains that our region’s sudden changes in temperature are especially hazardous.

Alexander and other researchers now study how people of different ages bodies’ are affected by more extreme heat and humidity, and working with meteorologists to better convey to the public the health hazards of the weather.

While weather reports usually refer to the combination of heat and humidity in terms of the heat index, this new measurement is largely a matter of perception of heat. Researchers prefer the “web-bulb globe temperature,” which also factors in direct sunlight and breeze and provides more specific measure of how health is affected.

By looking at wet-bulb globe temperature, scientists are discovering the limits of the human body to adapt to their environment.

In one recent study, researchers identified places on Earth in the Persian Gulf where heat and humidity may already reached levels at which human bodies are no longer able to regulate their temperature. 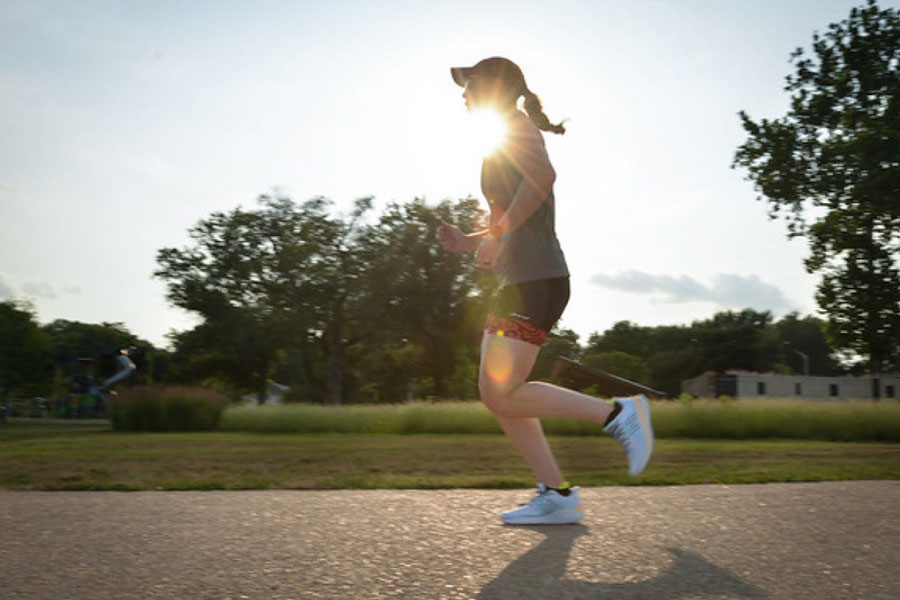 Athletes who exercise outside adapt more quickly to summer weather, although this flexibility has limits. Photo credit Carlos Moreno/KCUR 89.3.

Though our bodies are adaptable, Alexander says, this flexibility only goes so far. If climate change continues unabated, the burden of change will fall increasingly on communities to protect their citizens through cooling stations and other public accommodations.

“I think we will continue to adapt, but it gets to a point where it’s in a danger zone,” Alexander says. “And so we have to have the right public options and messaging to keep people safe.”

Acclimatization is natural process that occurs when we are exposed to new weather conditions over an extended period of time.

Within 10 days of exposure to hot, humid weather, most people’s bodies will make adjustments that help to keep cool. That includes lowering core temperature, which prompts sweating to begin sooner when we are hot, and increasing blood plasma volume, which aids in sweating.

It may be tempting to just lay low and stay indoors when temperatures spike, but studies actually show that people who exercise in hot, humid weather adapt to it much faster.

“We see full acclimation status right around day five or so,” Alexander says. “But if you don’t have that exercise stress along with the exposure to temperature and the combination of temperature and humidity, it can take a little bit longer.”

Spending all day in air conditioning may slow acclimatization because it reduces exposure to heat and humidity.

But Alexander cautions against forcing acclimatization. Older people and those with health conditions should avoid strenuous activity outside during days of high heat and humidity. And only people who have healthy kidneys and hearts should add additional sodium to their food.

In Weidling’s training sessions, she often works with athletes who are driven to push themselves to their maximum, and these summer days make that challenging. But even for the toughest triathletes, coping with heat isn’t just about toughing it out.

“I really think endurance sports is about knowing yourself and having that compassion and getting yourself into a mindful space to do what your body has available that day,” Weidling says.

KCUR 89.3 is Kansas City’s NPR affiliate public radio station. You can read and listen to more of their reporting at kcur.org.

The pandemic threw a wrench in many people’s holiday shopping. What used to be trips to stores and markets with the family to find the perfect gift turned into Amazon wish lists and online gift cards. … END_OF_DOCUMENT_TOKEN_TO_BE_REPLACED

Rhonda LeValdo travels from Lawrence to Kansas City for every Chiefs home game, but she’s never actually been inside Arrowhead Stadium. Instead, she stands by a bus stop at the corner of Red Coat Lane … END_OF_DOCUMENT_TOKEN_TO_BE_REPLACED

For eighty years, a story has remained buried under the tales of the great men of Kansas City jazz, from Count Basie to Charlie Parker. Living and playing alongside them was another legend, pianist … END_OF_DOCUMENT_TOKEN_TO_BE_REPLACED