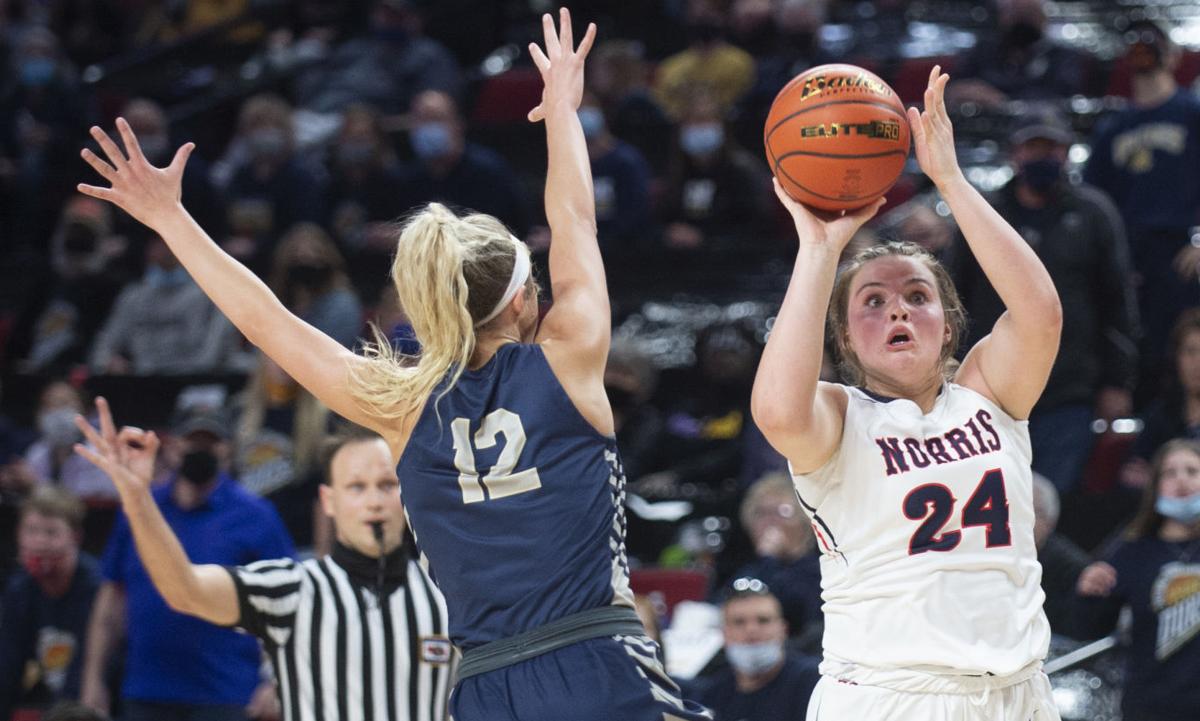 York’s Maddie Portwine (12) tries to block a buzzer-beating shot that Norris’ Brianna Stai made moments before the end of the third quarter during a Class B girls state tournament semifinal game Friday at Pinnacle Bank Arena. 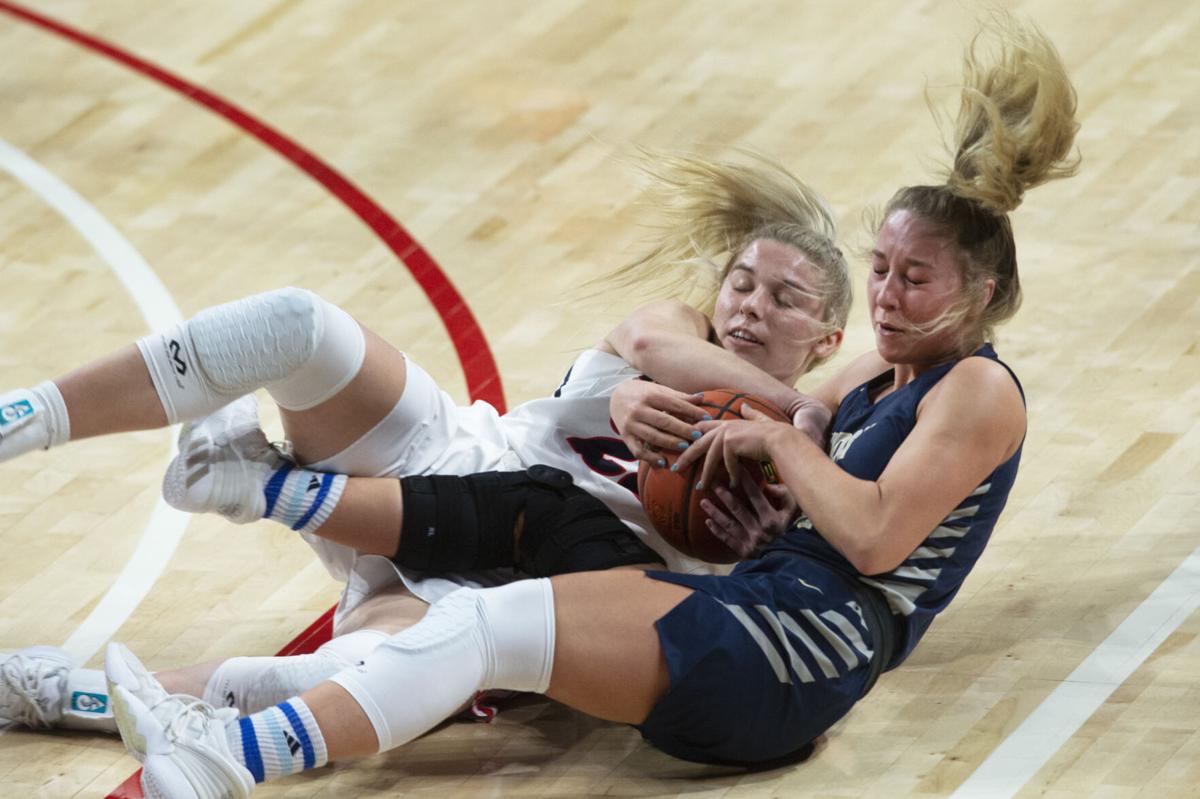 Norris’ Kalli Kroeker (left) and York’s Mattie Pohl tumble to the floor as they fight for possession of the ball in the first quarter during a Class B girls state tournament semifinal game Friday at Pinnacle Bank Arena.

So did Brianna Stai.

The Norris senior gave herself and her team a shot of confidence with a banked-in three-pointer at the third-quarter buzzer, and then hit a momentum-changing three a few minutes later to help the No. 2 Titans hold off No. 5 York 43-36 at Pinnacle Bank Arena.

The Titans have said throughout the season that they try to treat every game like Championship Saturday — the end goal for every team in the state. Now they’ll be living it Saturday afternoon at PBA.

“I know last year we were really bummed to make it this far (first round), so this year being able to get here and now being able to go Saturday is just amazing,” said Stai, who finished with a game-high 16 points, including 11 in the second half. “We have that confidence and we have knowledge in that gym.”

Norris (22-2), one of the favorites coming in, found itself in a hang-on-tight battle with the Dukes, who fought back from down nine early to tie the game heading into halftime.

York appeared like it would take a two-point lead into the final quarter, but Norris senior Kalli Kroeker grabbed a defensive rebound with about 5 seconds remaining in the quarter and spotted Stai breaking free down the left side of the court. Stai hauled in the pass, took one step and banked in a three from the wing to give Norris a 30-29 advantage.

“It gave so much momentum,” said Stai, who also hit some key free throws late in the game. “We love confidence and that’s something that really hypes us so much. We love each other so much, so when we feel that confidence from one person, it just spreads like a wildfire to our whole team.”

It was Stai’s second three that put Norris in a better position for the win. She came off a screen at the top of the key and launched a shot that fell dead at the back of the iron and dropped down. It gave the Titans a 35-31 lead with 5:15 remaining.

Norris’ defense did the rest.

After Maddie Portwine scored early in the fourth to give York a 31-30 lead, the Dukes went nearly the rest of the quarter without making a field goal.

“Their length just bothers you,” York coach Matt Kern said of a Titan team that features five players in its rotation that stand 5-foot-11 or taller. “Our offense wasn’t good today and that’s a credit to their defensive pressure. We had a hard time getting great shots off, but there’s no doubt that we battled.”

Behind the play of Portwine and junior post Masa Scheierman, York tied the game at 20-20 at halftime and had all of the momentum.

But the Titans kept their composure, coach Mark Hagerman said.

“‘It’s zero-zero, so let’s go win the second half,'” Hagerman told them. “Win each two-minute stretch, quarter — that type of thing — and the kids stayed true to that.”

Kern said it was easy to point to Stai’s buzzer-beating three to end the third quarter as a turning point, but “when Stai hit the three a little later, that one hurt. That was a big shot.”

Scheierman, who battled foul trouble, led York (21-4) with 13 points and Portwine added 12. The Dukes were in the state semifinals for the first time since 2017.