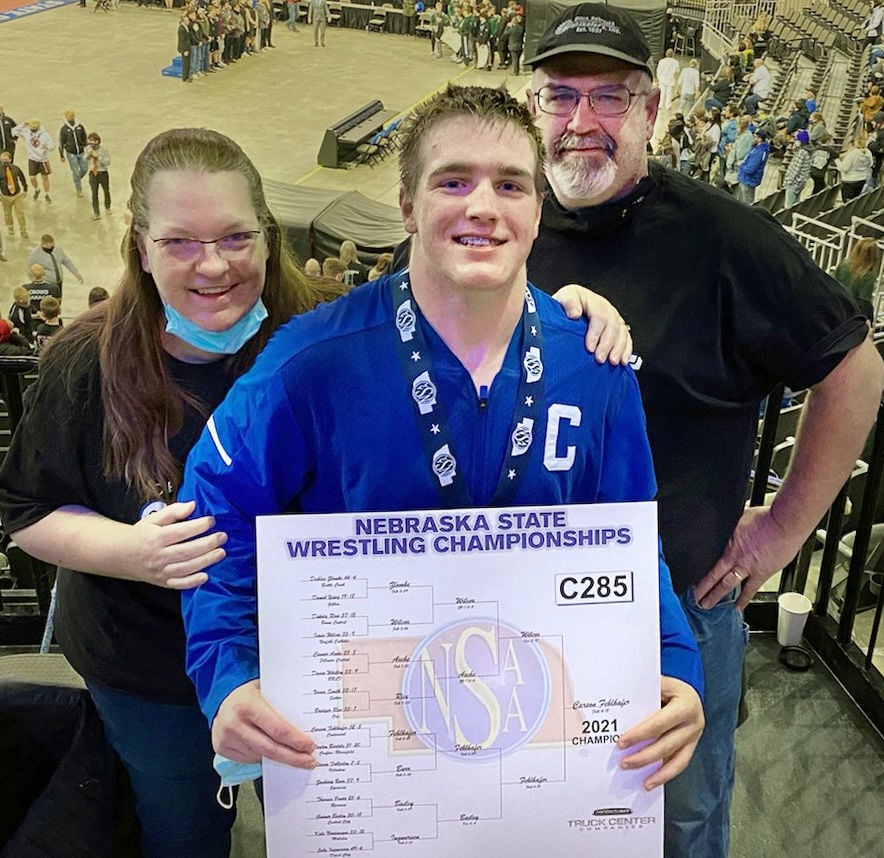 Christal Fehlhafer with son Carson and husband Andy after Carson won his weight division in the Class C state wrestling meet Feb. 20. After a seizure in late December, Christal was in a coma for two weeks. Once released, she vowed to get through rehab to watch her son wrestle at state. 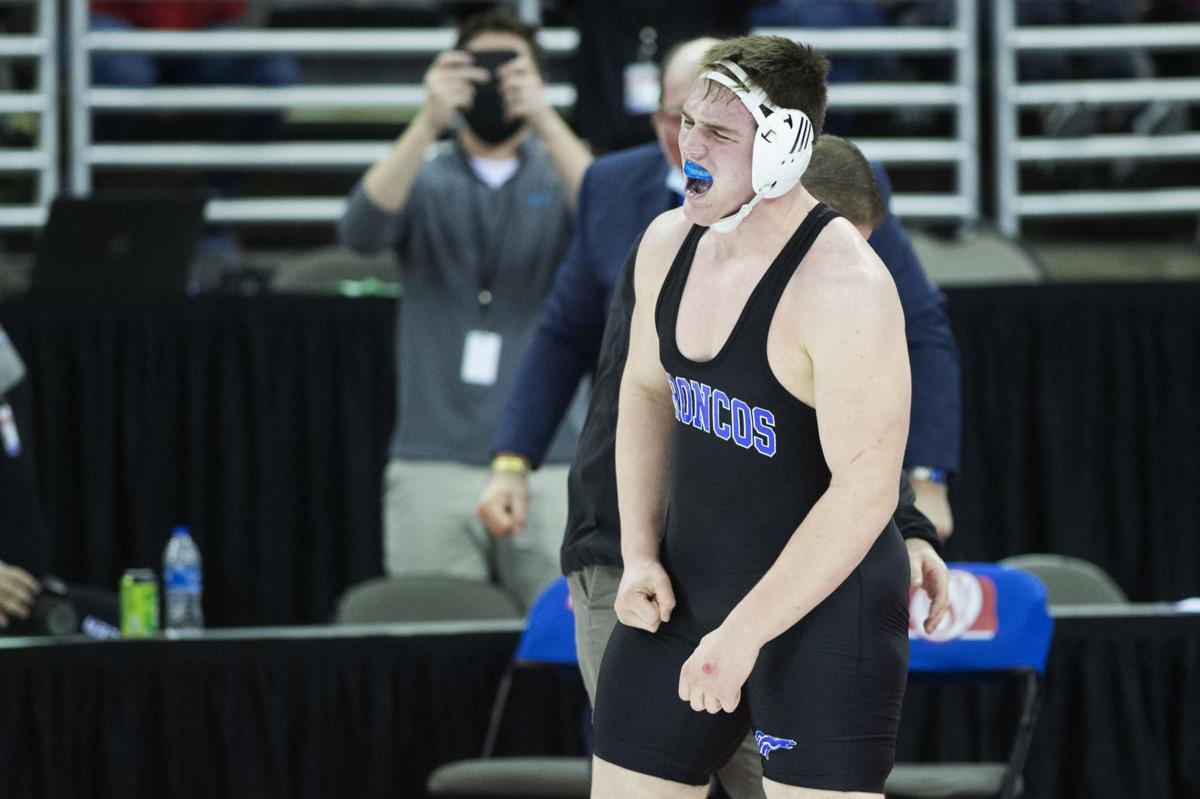 The wrestler was in the living room watching TV before practice that morning.

The wrestler’s mom was in the bathroom getting ready for her day.

The 17-year-old thought it might have been something outside their house in Utica.

Or something on TV.

He started to walk out to his pickup.

Then he thought again and he walked to the bathroom and stood at the door.

The future Class C heavyweight wrestling champion did not go to practice that day.

Christal Fehlhafer apologizes for not remembering.

There’s a lot she doesn’t remember about Dec. 28, she said Tuesday, back home after a physical therapy appointment.

Christmas? She doesn’t remember that, either.

Those first weeks of January?

Her short-term memory is still spotty. She’s short of breath and her sentences trail off.

Her voice isn’t strong like it used to be.

After her second-oldest son found her unconscious on the bathroom floor that morning, he called his dad, who works nearby at the salvage yard.

Christal had a seizure. She’d had seizures before. Her first when she was 19, the next eight years later.

They don’t happen often, she said. And they aren’t frequent enough for her doctors to consider her epileptic, but she took medication to keep them at bay.

She and husband Andy have four kids.

They all knew what to do if Mom had a seizure. Clear her airway. Get her to the hospital to be checked over.

In the past, she usually came home that same day. On occasion, the doctor would keep her overnight for observation.

This time, the seizures kept coming and an ambulance took her from the Seward hospital to Bryan East Campus, where doctors put the 49-year-old in a medically induced coma to calm her brain in hopes it would stop the seizures.

Carson stayed home with his little brother, Trevor, that Monday.

“I didn’t want him to freak out anymore than he needed to,” the wrestler said.

The next day, he headed back to practice. The season was still young and he had plenty of matches before the conference meet, districts and state.

Carson is the family’s only wrestler. On the mat since he was 3 or 4. Mom got hooked, too. Taking him to his Saturday morning meets.

Christal is supportive of all her kids’ activities, her sister-in-law Marci Fehlhafer said. And the wrestling community is like a family in itself.

He had always been a big kid. When he was in junior wrestling, most kids competed against wrestlers their own age. Carson wrestled up, on the mat with sixth or seventh graders, 2 or 3 years older.

He lost a lot.

“His coaches always told him, this will pay off,” Christal says.

He placed fifth at the state meet as a sophomore.

He had his eye on making it back to Omaha as a junior.

“When they told us kids ‘coma,’ you think that’s not good.”

He went to practice to keep his mind busy. At meets, he’d look up into the stands, where his mom always sat.

And he kept winning, going 20-2 during her hospital stay.

“Carson really has a calm demeanor,” his aunt said. “He has the Fehlhafer trait to just put one foot in front of the other.”

After two weeks, doctors slowly brought Christal out of the coma. She had pneumonia and a staph infection and doctors treated those.

“They don’t know if that’s why I had the seizure or if they developed when I was in the ICU,” she says.

She also had suffered a traumatic brain injury from the seizure activity and she was transferred to Bryan West for rehab.

Andy came to see her every night after work to sit by her bedside and to be there when the doctor made rounds.

When she woke up, he played videos on his phone from wrestling meets, shared with him by another wrestling mom. When Carson pinned an opponent, Christal squeezed Andy’s hand to let him know she saw it.

Four times a day, she went to therapy. She told the nurses she needed to get home.

“Wrestling was a big part of our bond together and he was doing it without me,” she says of Carson. “I begged them to let me out of here before the state meet.”

She made it home in time for the conference meet.

And she was there at districts, too.

He knew how important wrestling was to his mom. His biggest fan.

“She would rather miss, like, I don’t know, an Easter dinner with her whole family than miss a wrestling match.”

She wasn’t a loud-mouth mom. But she was eagle-eyed. She took pictures and they pored over them after matches.

In the month of her hospitalization and convalescence, Christal had been wrapped in love.

Marci organized a meal train and food arrived each night for Andy and the kids. People sent gift cards and wrestling coaches reached out to Carson with support.

The mom calls her son humble. Laid-back. His aunt calls him gentle and kind.

The gentle giant of a kid pinned all four of his opponents on the way to a state title Feb. 20.

On the weekend of state, the wrestler’s mom and dad walked into Omaha’s CHI Health Center arena. Christal leaned on her cane and the staff found her a wheelchair and ushered them up to a special seating area.

When Carson won the first match, they were happy, she said two weeks later.

And then he won the second one, and that was great.

“And then he won the third one and we couldn’t believe he was in the finals.”

After he won that final match, Carson climbed the stairs and wrapped his mom in a bear hug.

Relief. That’s what he felt.

“We both had accomplished something,” he said.

The wrestler had won.

And the wrestler’s mom had been there to see him do it.

{{featured_button_text}} Jake Immink of Fairbury was on a ventilator for more than 120 days, first at Bryan West Campus in Lincoln and then at the Nebraska Medical Center. While he recovered from … END_OF_DOCUMENT_TOKEN_TO_BE_REPLACED