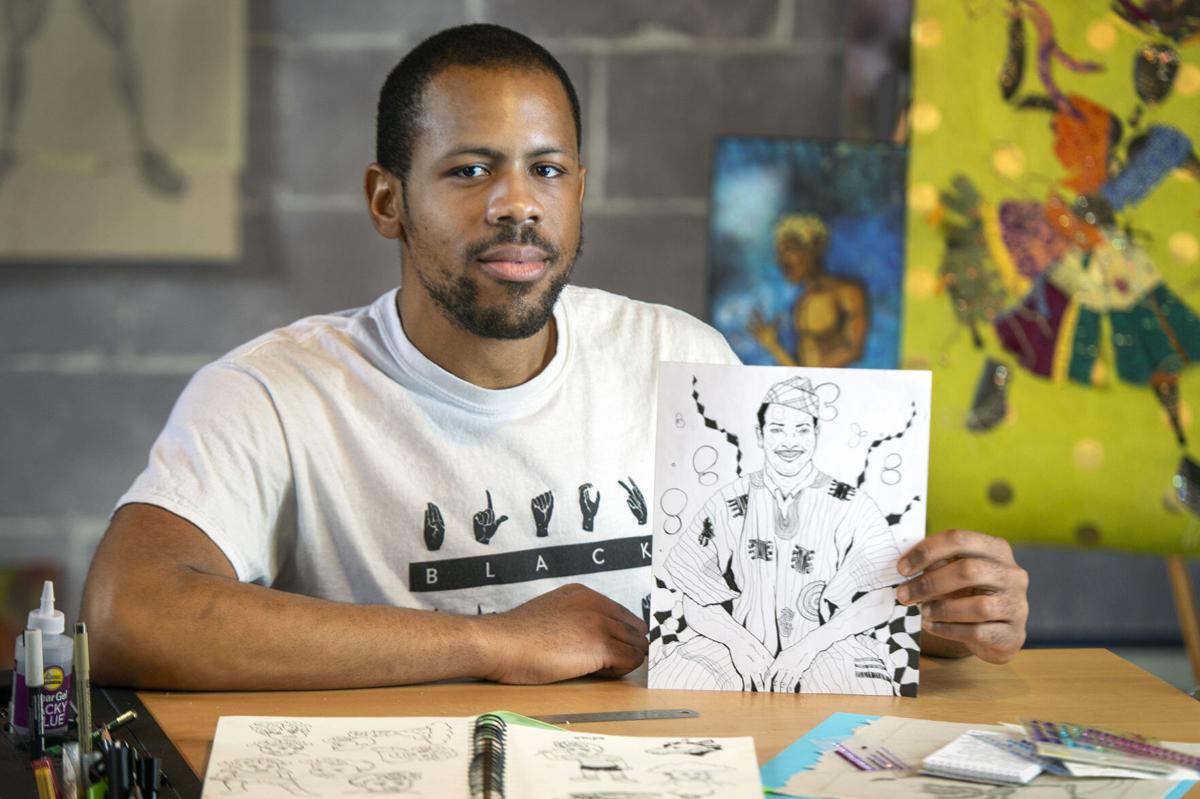 Artist Artie Mack poses with a drawing of Andrew Foster that was included in a Black History Month coloring book. Foster was a deaf missionary and the first Black to graduate from Gallaudet University. 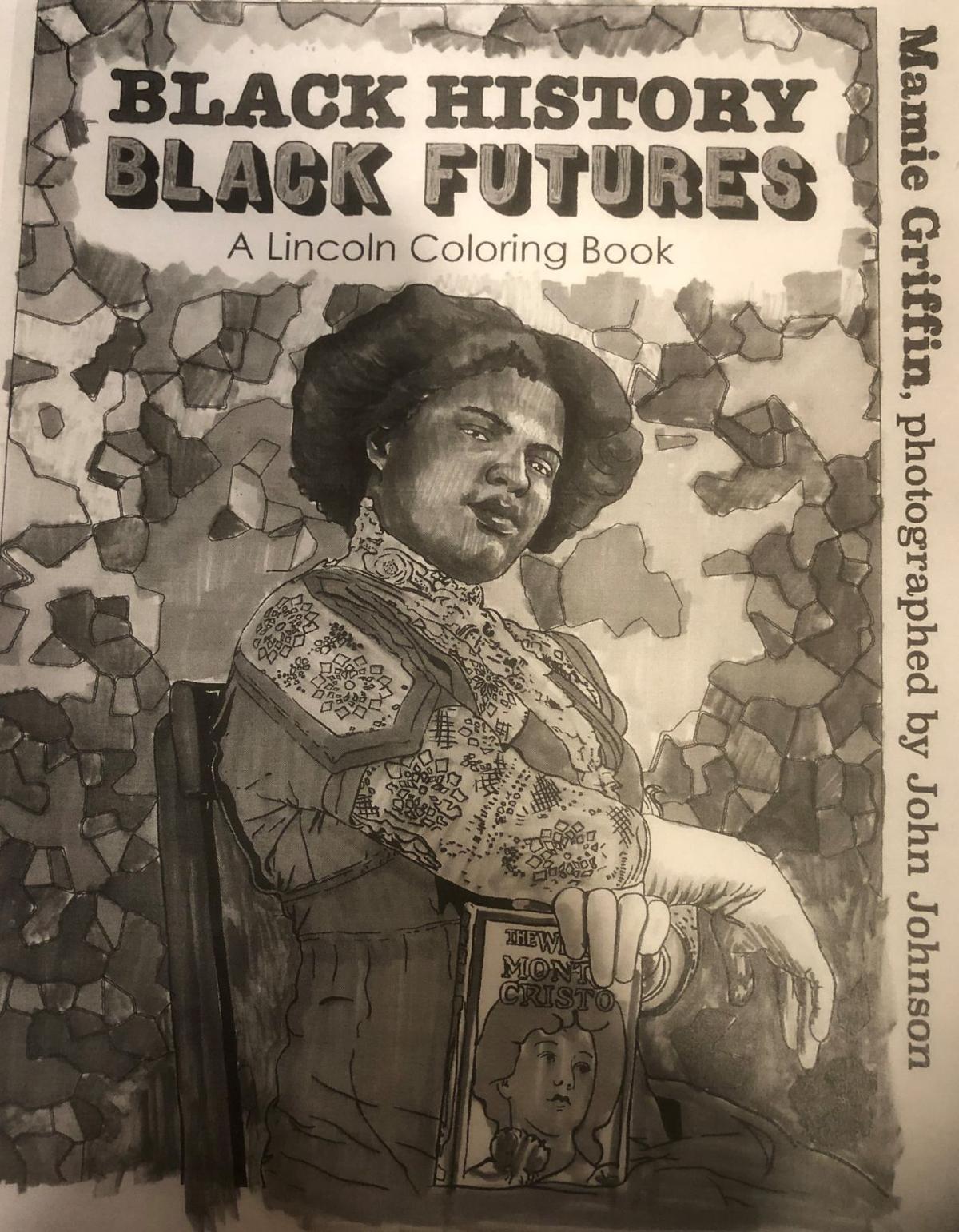 Mamie Griffin, who was immortalized in a 1920s photograph by Black photographer John Johnson of Lincoln, is one of the Black people featured in a coloring book called Black Lives, Black Futures.

He learned his story. A Black man born in Alabama in 1925, who went deaf when he was 11 after a bout of spinal meningitis and became the first African American to receive a bachelor’s degree from Gallaudet University.

A man inspired by this Bible verse: In that day, the deaf will hear the words of the book …

A man who traveled to Ghana in 1957 and eventually opened schools for the deaf in 13 African nations.

And the Lincoln artist made him come alive in a drawing, too. In a pencil-and-ink outline, Foster appeared in African dress and a small hat, sitting with his hands lightly clasped, smiling.

Mack drew the image from a photograph, adding his own embellishments. He drew it for a coloring book called Black Lives, Black Futures.

The idea for the book started in the South of Downtown Community Development Organization on 11th Street. Kat Wiese works there. Derick Gaspard runs his vegan restaurant Juju’s from a side room.

“It was so much fun,” Wiese said. “We started thinking, ‘What can we do during the pandemic that is delightful and celebrates Black history and is still safe?’”

The three of them thought about art and their connections to artists in the neighborhood. One of those artists, Dwight Brown, had created Mount Blackmore, with the faces of Frederick Douglass, Harriet Tubman, MLK and Malcolm X, instead of former presidents.

Wiese had the print hanging in her studio. What about creating a coloring book?

A coloring book they could give away to school children and neighbors. A coloring book people could download for free and share with their kids, or color and learn for themselves.

“We wanted to capture some of the tradition and history that exists in our own city,” Wiese said. “The things people have accomplished is pretty amazing.”

The trio started calling Black artists in town. Idigima contacted students she had connected with through her art classes. The drawings began arriving. Malcolm X. James Terry, a Lincoln music organizer; Mamie Griffin, who was immortalized in a 1920s photograph by Black photographer John Johnson of Lincoln. The history-making faces of Mount Blackmore.

Mack, the artist who drew him and researched his life, works part time for Gaspard at Juju’s — and full time as a baker for the Coffee House downtown. He grew up in Lincoln and graduated from UNL in 2013. He had a minor in art and ethnic studies, but he’s a self-taught artist for the most part.

During the Black Lives Matters protests last summer, the 31-year-old designed a T-shirt using American Sign Language to spell out those three words. The shirts raised $6,000 for the Black Leaders Movement.

He’s passionate about raising awareness of the contributions from the Black deaf community and their erasure from the historical record as activists.

So when Gaspard told him about the project and asked if he’d like to participate, he knew he wanted to shine a light on one of those difference-makers.

He started to dig. He found out that Foster had moved to Detroit to attend the Michigan School for the Deaf, took night classes to earn a diploma from the Detroit Institute of Commerce, worked and graduated from high school at 26, graduated from Gallaudet and later earned two master’s degrees, one in education and one in Christian Mission.

“I really loved that he traveled all over the world and went to Africa, which is like the homeland and paved the way for deaf Africans to come to the United States and study,” Mack said. “I also loved that as an educator he realized there was not one special method to teaching, whether sign language or talking or a combination of that, whatever is best for a person to learn you embrace that.”

Foster spent his life teaching deaf children, building 23 schools for them in Africa — and raising money to make those schools happen.

He died in a plane crash in Rwanda in 1987, Mack wrote. He was married and had five children.

Mack also wrote of the discrimination Foster faced and the hills he climbed.

“I chose to honor Andrew Foster because his Black deaf American experience and activism took him all the way to the motherland in Africa,” he wrote. “He became a bridge between deaf and hearing cultures, between Black deaf people and sign language, and reminds us to always be fighting for all Black lives across the globe through an intersectional lens.”

Only a line or two of that history will appear in the coloring book. But it’s out there for people to learn about, if they look.

Mack started a TikTok channel at the end of January — @Theartiemack has grown from 500 to 10,000 followers.

He shared a TikTok to kick off Black History Month. It got more than 55,000 views.

He signed. And he spoke. And he flashed a drawing of a Black man that would soon make its way into a coloring book.

{{featured_button_text}} The Lincoln-Lancaster County Health Department reported 40 new cases of COVID-19 on Sunday, bringing the community total to 28,522.The number of deaths from COVID-19 in the … END_OF_DOCUMENT_TOKEN_TO_BE_REPLACED

{{featured_button_text}} Andrew Weeks with his corgi, Atticus “Attie” Finch. The Lincoln attorney wrote an ode to his dog, purchased for him by his then wife, Christine Weeks, in … END_OF_DOCUMENT_TOKEN_TO_BE_REPLACED

Many elderly residents of nursing homes are seeing younger patients move in, often with mental illnesses. (Photo by Steve Smith via Getty Images) One year ago, a nursing home in Kirkland, Washington, … END_OF_DOCUMENT_TOKEN_TO_BE_REPLACED