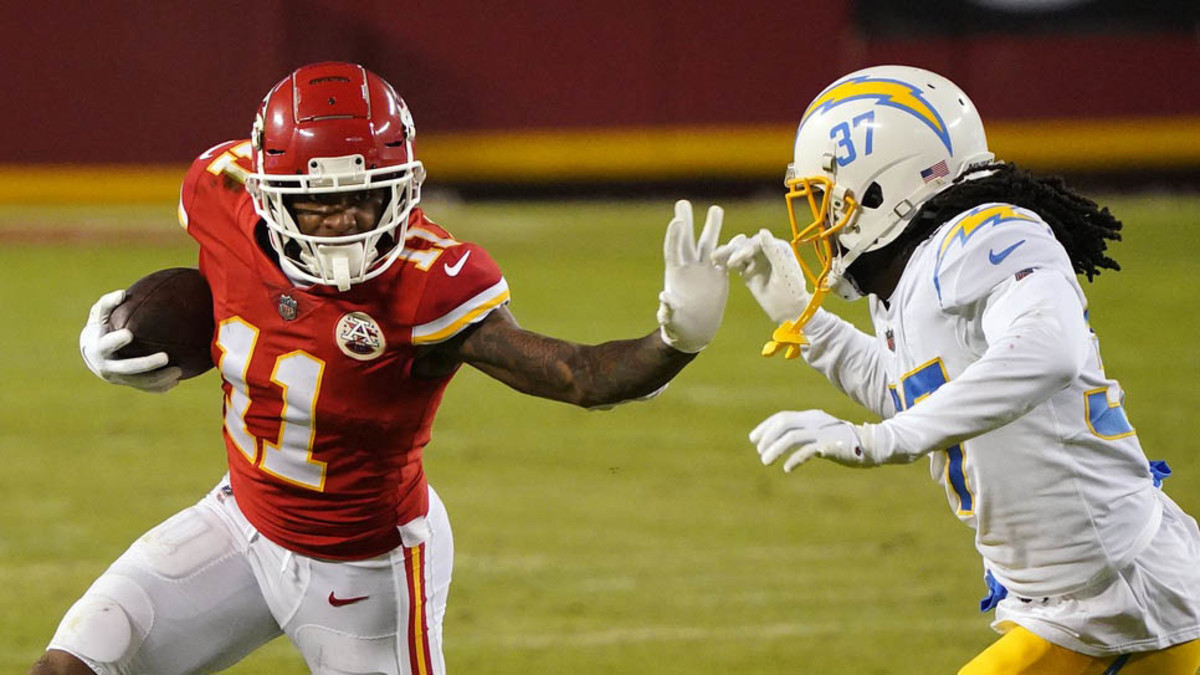 After striking out on a number of big-name free-agent wide receivers, the Kansas City Chiefs have reunited with longtime Chief Demarcus Robinson to bring some experience back to the receiver room.

Robinson has reportedly signed a one-year deal to return to the Chiefs according to Adam Schefter of ESPN. Aaron Wilson of the Houston Chronicle reported that it’s a one-year veteran-minimum deal worth $1.137 million, fully guaranteed.

Robinson’s return adds him to a wide receiver group with Tyreek Hill, Mecole Hardman and Byron Pringle and likely without free-agent Sammy Watkins, who has been visiting other AFC teams this week. The Chiefs reportedly offered more money to JuJu Smith-Schuster than the Pittsburgh Steelers, who he ultimately re-signed with, and pursued Josh Reynolds, who landed with the Tennessee Titans. On Wednesday, T.Y. Hilton re-signed with the Indianapolis Colts, taking another potential wide receiver target off the Chiefs’ board.

Over his five-year career with the Chiefs, Robinson has recorded 120 catches for 1,415 yards and 11 touchdowns, with all of those stats coming over the last four seasons. Robinson also added another 10 catches for 144 yards and one touchdown in the playoffs.

What does this mean for the Chiefs?

As the game of wide receiver musical chairs was played at the start of the free agency period, the Chiefs were left without a high-impact target to add to their offense for 2021 and Robinson likely found that his market wasn’t as strong as he may have hoped for a second-consecutive offseason.

Ultimately, my feelings about this re-signing hinge completely on how the Chiefs view Robinson and their receiving corps. If Robinson returns as the Chiefs’ third or fourth receiver (in competition for targets with Mecole Hardman) behind Tyreek Hill and a still-to-be-added receiver, then it’s a great move that deepens Patrick Mahomes’s pass-catching roster. If the Chiefs view this as their last meaningful addition at receiver, it’s a very poor sign, likely planning on Hill, Hardman, Robinson and Pringle to be their one-through-four.

In my estimation, the Chiefs still need a WR2, and bringing Robinson back simply adds a layer of depth and comfort in the offense to a roster that can always use more of it.

Jacob Collier Jacob Collier is coming to The Truman this Thursday night. This event has been rescheduled from May 2020, and resellers seemed to have marked up ticket prices quite a bit. But trust … END_OF_DOCUMENT_TOKEN_TO_BE_REPLACED

Posted on May 19, 2022 The City of Overland Park welcomes a new Human Resources Department leader, following a national search. Thomas Bledsoe comes to the City from … END_OF_DOCUMENT_TOKEN_TO_BE_REPLACED

Food from the upcoming Westport Korean restaurant Chingu/Photo by Alyssa Broadu Chingu, a new Westport spot from the team behind Sura eats, will combine Korean street food and soju … END_OF_DOCUMENT_TOKEN_TO_BE_REPLACED