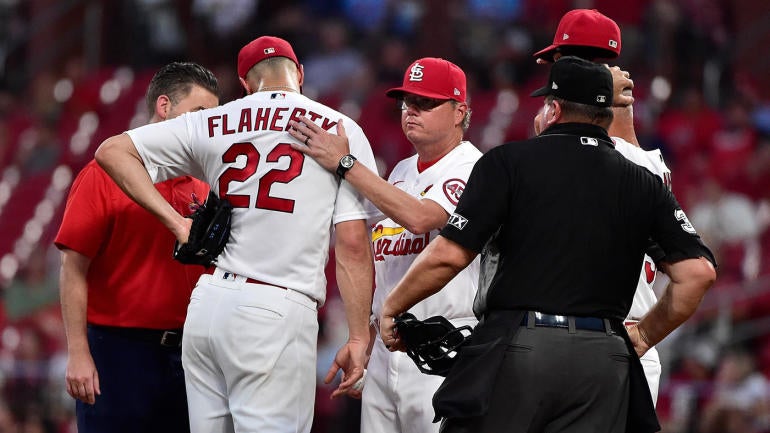 No less concerning is that Flaherty showed diminished velocity prior to being lifted. His fastball was down a couple of ticks early, and before leaving the game he wasn’t even cracking 90 mph with his fastball:

Flaherty exited the game after allowing home runs to Robbie Grossman and Miguel Cabrera. In those two innings, Flaherty allowed four runs on four hits and walked three against only one strikeout. On the season, he’s now pitched to a 3.08 ERA in 14 starts and 76 innings.

Flaherty not long returned from the injured list after missing two and a half months with an oblique injury. In his first two starts back, he appeared to be in vintage form, but things took a turn for the worse in his third start since being activated.

Losing the 25-year-old right-hander for another stretch would be damaging to the Cardinals’ fading playoff hopes. They entered Tuesday’s slate 4 1/2 games out of the second NL wild card spot, and the SportsLine Projection System gave them just a 10.6 percent chance of making the postseason. With Flaherty’s status moving forward uncertain, those odds should probably be even lower now.

The pandemic threw a wrench in many people’s holiday shopping. What used to be trips to stores and markets with the family to find the perfect gift turned into Amazon wish lists and online gift cards. … END_OF_DOCUMENT_TOKEN_TO_BE_REPLACED

Rhonda LeValdo travels from Lawrence to Kansas City for every Chiefs home game, but she’s never actually been inside Arrowhead Stadium. Instead, she stands by a bus stop at the corner of Red Coat Lane … END_OF_DOCUMENT_TOKEN_TO_BE_REPLACED

For eighty years, a story has remained buried under the tales of the great men of Kansas City jazz, from Count Basie to Charlie Parker. Living and playing alongside them was another legend, pianist … END_OF_DOCUMENT_TOKEN_TO_BE_REPLACED