Among them were teachers and administrators, students and parents, community workers and Mayor Quinton Lucas.

The program Lucas and others are promoting is called Working For Youth. In just its first year, 89 employers offered paid internships to more than 420 teens. The summer gigs run about eight weeks and cover a range of career paths, from insurance and human resources to construction and custodial.

The partnership is led by nonprofits KC Common Good, Hire KC and Entrepreneurship KC, with substantial help from the DeBruce Foundation.

KC Common Good manages the project. Its president, Klassie Alcine, said organizing all the connections can be like herding cats, but she keeps a compelling end-goal in mind: “How do we help our kids not get shot?”

“In Kansas City, our youth violence is out of control,” she said, “and so one of the most effective ways is to provide them with a positive outlook in life, through jobs.”

So far, the program has trained, coached and employed 8.5% of the 5,000 youth living east of Troost Avenue.

“We thought if we got 50 employers, we’ve got a home run. We thought if we had 250 kids show up, we’re doing great,” Alcine said. “So to have over a thousand kids apply, 89 employers step up — we’re just all in shock, to be honest with you.”

At a press conference in July, Kansas City Public School’s Crystal Everett recognized two student participants in the Working For Youth Program, and said she looks forward to watching the program grow.

Research from the universities of Chicago and Pennsylvania suggests summer jobs programs like this can reduce crime — not because they simply keep kids off the street, but because they might change future behavior.

“A lot of that job is making sure that our students have access to what we call market value assets, including internship opportunities, entrepreneurial experiences, college credit, or even earning industry recognized credentials,” she said.

To Everett, the value in programs like Working For Youth is they can teach students about the sheer range of career opportunities that exist.

“Not just saying, ‘Oh, be a doctor, be a lawyer, be a teacher,’” she said. “All those are needed, but, you know, there are so many different, cool things that they just need to see.”

The businesses taking interns on-board get something worthwhile out of the deal, too.

“This is not just some theoretical exercise,” she said. “These students are developing ideas that will have real impact in the Kansas City business community and beyond.”

The nonprofit KC Pet Project has also accepted Working For Youth interns this year — 13 in total, who are working in all areas of the organization.

The extra hands are definitely needed, especially during “kitty season,” feline department manager Matthew Finacune said. The shelter is on pace to care for 12,000 pets this year, a historically large number that is at least partially fueled by a preponderance of pandemic evictions.

For Marcellus Howell, a 15-year-old East High School student who worked under Finacune this summer, landing the internship was a bit of a surprise. 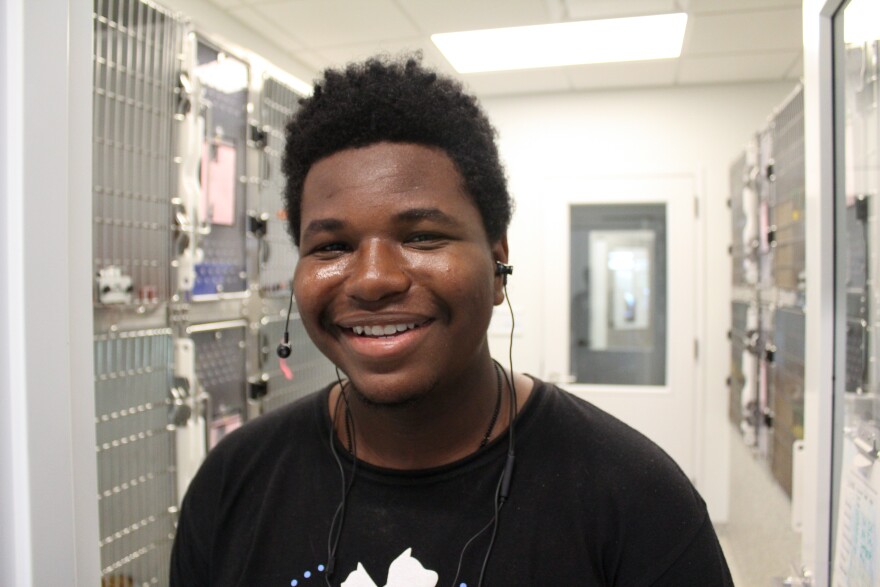 Howell, who moved to Kansas City from Topeka, said he wasn’t expecting to find such a good work opportunity after his freshman year at East High School. “I wasn’t out of my way, looking for it,” he said, “(but) any opportunity I get to make money, I’m going to take it.”

“I didn’t know anything about being an intern at all,” Howell said, “but I kind of just figured that was for good kids, like good grades and stuff.”

That didn’t necessarily describe Howell, who considered himself a former class clown. When he found out he got the job, Howell said he was in disbelief.

As he cleaned cat enclosures, restocked food, water and towels, and played with the cats to help socialize them, Howell said he ultimately wants to make a living as a musician and business owner. But he saw value in this experience, too.

“You never know, I might actually end up becoming a cat specialist or something,” he said. “Since I want to be an entrepreneur, I’ve got to be able to manifest in multiple different things.”

The money doesn’t hurt either. Howell will earn about $1,000 this summer, doing better work than whatever else he could have found on his own, and as a minor, Howell said.

Plus, he just loves taking care of the cats.

“This sets a ground for caretaking — with people or animals,” said Howell, something his mother and grandmother both did in their time. “It just opens up a career pathway.”

The DeBruce Foundation is a supporter of KCUR 89.3

This year’s Halloween weekend is packed with events in Kansas City, from paranormal investigations to a disco night at one of the city’s swankiest nightspots. Here are our seven favorite Halloween … END_OF_DOCUMENT_TOKEN_TO_BE_REPLACED

Strang Hall, the food hall in Overland Park, is expanding to the Lightwell building in downtown Kansas City.  Menlo Food Labs, Strang Hall’s parent company, announced today that they will be … END_OF_DOCUMENT_TOKEN_TO_BE_REPLACED

Kansas City has long been a city of artists, but the last year and a half of pandemic living led to more people than ever making things like kiln-fired porcelain earrings, custom … END_OF_DOCUMENT_TOKEN_TO_BE_REPLACED