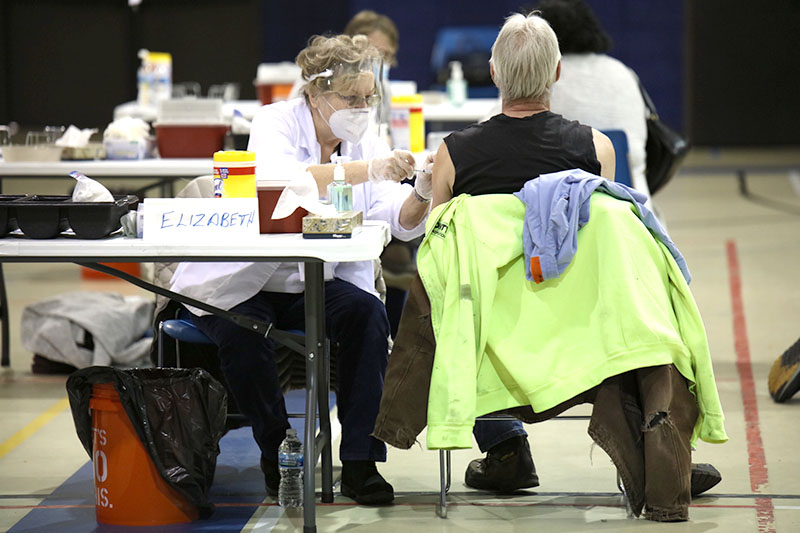 A spokeswoman for Gov. Mike Parson’s office confirmed Tuesday afternoon that, as it currently stands, the state is still planning to hold its first mass vaccination site in the St. Louis area Saturday at the University of Missouri-St. Louis, after previously announcing that all the sites for this week would be canceled.

Parson identified site locations over the weekend for Missouri’s fourth week of COVID-19 mass vaccination events, and for the first time, the sites were set to include locations in St. Louis and Kansas City. But the governor’s office announced Monday night that all events are canceled for this week due to winter weather across the state.

But the website for the vaccination events listed all the events as canceled, except the UMSL event which was still “pending.” Contacted by The Call, a spokeswoman for the governor initially said Tuesday that all the sites are canceled, but after contacting the State Emergency Management Agency, she confirmed that the St. Louis County event is still being planned. That could still change depending on the weather, but the spokeswoman said a site visit was being conducted Tuesday in preparation for the event.

The confusing turn of events came just days after a dispute erupted between St. Louis regional leaders and Parson over how many vaccine doses should be sent to the St. Louis region. A third of Missouri lives in and around St. Louis, and local leaders contended that the region was receiving half the doses it should be while rural areas received more than their share.

But the day after Garza complained, the state doubled the doses it is sending to St. Louis, ramping up the supply set to be available this week.

As the dispute made headlines over the weekend, the state announced its first National Guard-staffed mass vaccination sites to be held in St. Louis and Kansas City. All the previous mass events have been held in rural locations an hour or more from the state’s most populated cities and counties, but with the vaccine hard to come by in St. Louis, some St. Louis County residents here have chosen to travel an hour or more to the state’s mass vaccination sites to get shots.

The events are a partnership of the Missouri National Guard, Department of Health and Senior Services (DHSS), SEMA and local healthcare systems. In order to quality to get a vaccine at the one of the sites, attendees must be Missouri residents and qualify to get the vaccine under the current Phase 1B, which includes those over age 65, first responders and healthcare workers.

Here is the information for the St. Louis County mass vaccination site, that was set to be held Saturday, Feb. 20,  at the University of Missouri-St. Louis in North County. At the time this article was published, the state’s registration page said that registration information for the UMSL mass site was still pending. Editor’s note: Keep checking www.callnewspapers.com for the most up-to-date information on whether the event is still being held.

A second St. Louis area mass vaccination site was canceled that was set to be held Friday, Feb. 19 at the Lincoln County Fairgrounds in Troy, Missouri, but that was only supposed to be for the second vaccine shots, or booster shots, the state said.

Due to potentially hazardous and changing weather conditions, the state says Missourians attending the mass events should visit MOStopsCOVID.com/events prior to traveling to confirm their region’s mass vaccination event has not been canceled.

“While weather forecasts indicate Missouri will experience frigid temperatures this week, DHSS, the Missouri National Guard, SEMA, and our local partners remain dedicated to our shared goal of getting vaccines into the arms of every Missourian who wants one as quickly as possible,” Parson said in a news release. “We thank all Missourians for their continued interest in getting the vaccine. Everyone will have an opportunity to receive a vaccine as soon as supply allows.”

The National Guard, DHSS and SEMA teams will return to each site after 21 days for Pfizer vaccines and 28 days for Moderna vaccines to administer second doses. Unless otherwise notified of a location change, individuals should plan to return for their second dose at the same site that they received their first dose.

To date, providers throughout the state have administered more than 871,000 doses of COVID-19 vaccine.

Missourians who would like to register for a vaccine are encouraged to use Missouri’s Vaccine Navigator or to reach out to health centers in their area. A list of vaccinators, as well as the latest vaccine updates, can be found at MOStopsCOVID.com.

February is short but sweet. This month, we share our picks for the city’s best bonbons and a lot of other unique sweets that are baked, dipped and drizzled to perfection. By Dawnya Bartsch, Martin … END_OF_DOCUMENT_TOKEN_TO_BE_REPLACED

Photo by Caleb Condit and Rebecca Norden It’s Valentine’s Day month, but fancy chocolate deserves to be enjoyed year-round. We visited chocolatiers around the … END_OF_DOCUMENT_TOKEN_TO_BE_REPLACED

Posted on December 1, 2022 Overland Park now has more access to information about its Police Department than ever, thanks to a library of online transparency-focused … END_OF_DOCUMENT_TOKEN_TO_BE_REPLACED

The annual Beard Awards semifinalists nominations were just released and Kansas City’s food and drink scene has something to celebrate. The KC area has seven semifinalists by our count, including two … END_OF_DOCUMENT_TOKEN_TO_BE_REPLACED