A few months after her grandfather died, Tausha Hammett stood in the kitchen at his restaurant—LC’s Bar-B-Q, off Blue Parkway near the stadiums—inspecting the brick-lined barbecue pit behind the counter, trying to figure out where all the grease was coming from.

“There’s a ton of grease that gets dropped off the meat, so that grease buildup, it starts coming out of every crevice,” she explains. “When I looked up, it had grease coming out of spots on the pit that it wasn’t supposed to.”

That’s what initially tipped off the 40-year-old Hammett, who started working at LC’s back when she was 12, that something might be amiss.

Maneuvering the meat on a three-tier smoker isn’t easy if you’re not tall, but Tausha Hammett has her ways.

Hammett closed the restaurant for a few days last week to give the pit a total overhaul. It was the first round of major changes since LC Richardson, the restaurant’s owner and namesake, died in February at the age of 86.

LC’s Bar-B-Q, with its one location and three-tier smoker buckling under the weight of stacked meat, is a Kansas City tradition. It rose to prominence as the official unofficial pit-stop on the way to Royals and football games. Even opposing teams have been known to drop by.

When Anthony Bourdain visited Kansas City on his travel show “No Reservations,” LC’s was one of two barbecue spots on his agenda. Closeups of their burnt ends offered lessons on the art and science of the the city’s signature dish. “This is more my style,” Bourdain remarked.

LC’s enormous pit, and Richardson himself, have sat at the center of that tradition for 30 years. So his absence these last few months has been impossible to ignore.

The rolling office chair he once occupied is turned sideways, so no one else can sit there. The table where he kept “office hours” displays a commemorative plaque. Hammett says it’s tidier than her grandfather kept it—but otherwise, his spot looks just the way he left it. 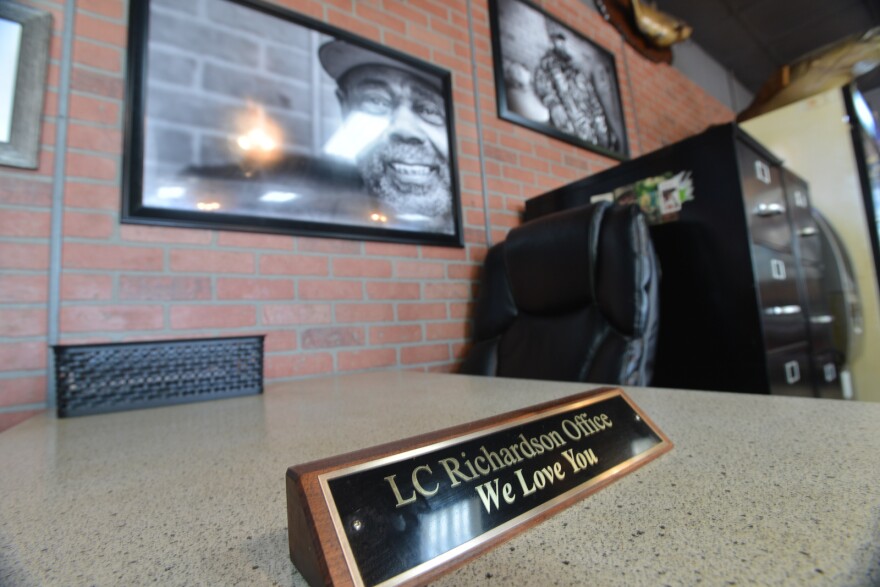 LC Richardson’s presence can still be felt at his restaurant. But so can his absence.

In everything she does, Hammett walks a fine line between keeping things exactly the same — to honor her grandfather’s legacy — and making updates where they’re needed — for the exact same reason.

Even before Richardson died, Hammett was keeping the future of LC’s top of mind.

She grew up mesmerized by the joy her grandfather took in his restaurant. She gave up her weekends to work the cash register at LC’s—even while her friends were out having fun at school football games.

She took every chance she got to join Richardson on fishing trips, so she could hear his stories. When she studied business at Tennessee State University, a historically Black college, she was doing it for LC’s. 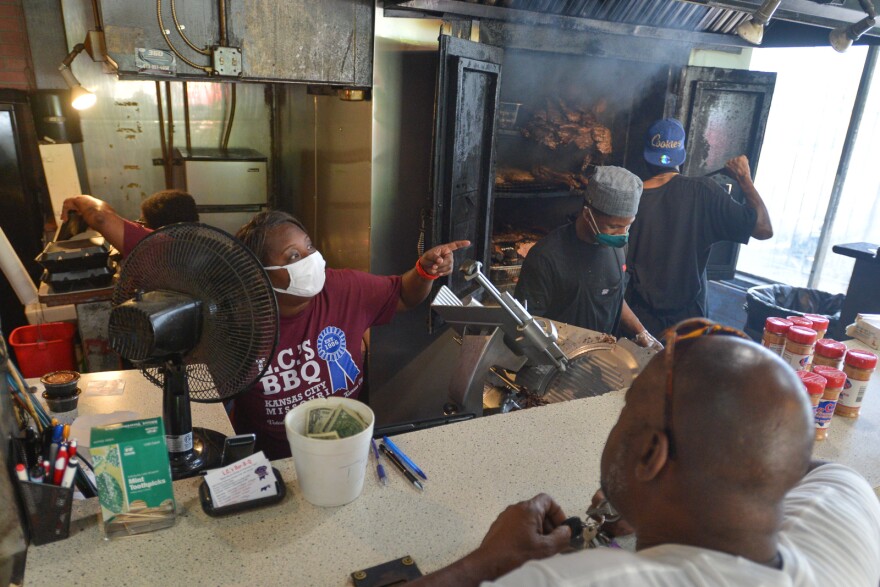 Tausha Hammet walks a customer through the menu at LC’s Bar-B-Q.

“The generation that my grandfather grew up in, the Baby Boomers, that whole ‘handshake deal take everybody at their word,’ that is gone,” Hammett explains. “I wanted to have all my ducks in a row. I took all the classes that I could to make sure that I was the best person to help my grandfather.”

Richardson, a Mississippi native, got his start picking cotton. “He was the oldest of nine children,” Hammett says, “and he had to fend for himself. He told me he planted his cotton, he picked his cotton, and he sold his cotton. He did that all by himself so that he could keep the money.”

That’s how Richardson managed to leave his small hometown, on his own, at 18.

After he retired from a steady job at the Kansas City-based Farmland Industries, Richardson opened LC’s at the age of 52. He loved to cook, and always wanted to be an entrepreneur. 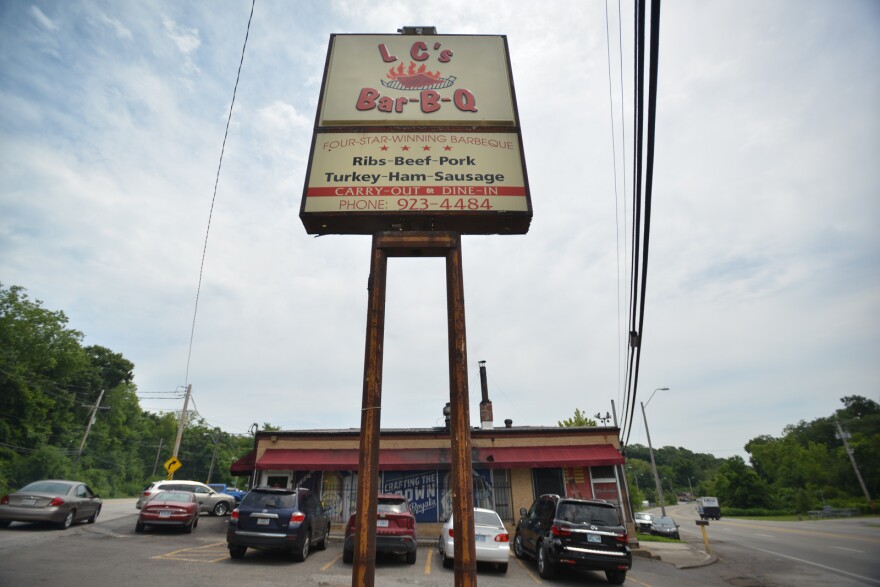 LC’s advertises the old-fashioned way: with a great big sign.

For as small as the restaurant is today, it was even smaller in 1986, just a counter attached to a liquor store. Back then, the food came from an outside smoker so small it fit in a barrel.

Around 1990, when LC’s expanded to take over the entire liquor store space, the pit made its introduction. The thing was massive, leaving room for only a handful of tables. To Hammett, still a kid at the time, a pit that big made no sense.

“I didn’t understand why we needed this,” she says.

Hammett has changed her mind since.

“Every time I walk in and somebody has taken pictures of that thing, talking about, ‘Oh, I love the smell, I just want to sit here so I can leave and be able to smell the smoke later’—it is the moneymaker,” Hammett says. “If I could put two in there, I would.” 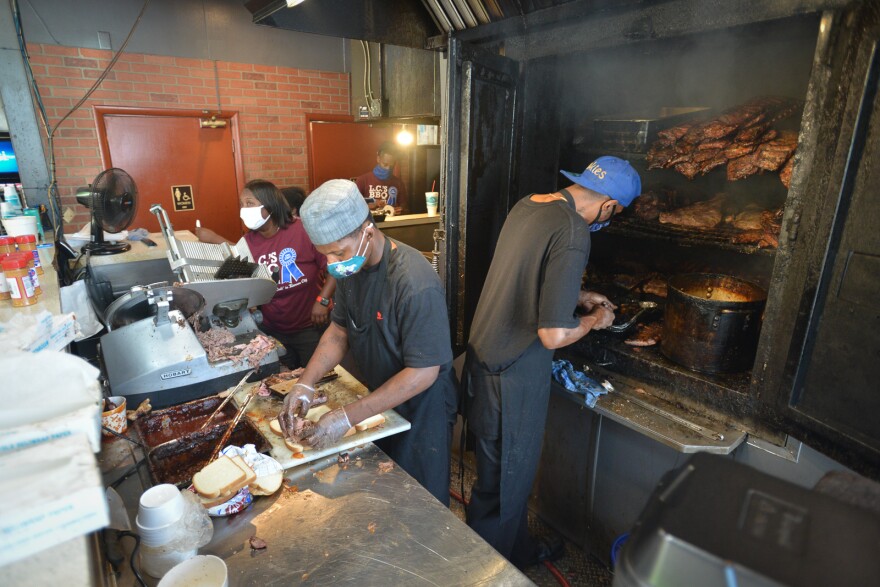 The barbeque pit behind the counter at LC’s is what Tausha Hammett calls “the moneymaker.”

As her grandfather got older, Hammett tried to convince him to spend less time at LC’s—even though he was more host than cook by then. “The restaurant was running efficiently,” she says.”But that was his happy place.”

Now, Hammett’s the one chatting up customers. Instead of perching in the dining room, Hammett makes sure to reply to every single customer review of LC’s she can find online, whether it’s glowing five-star praise or a brutal one-star takedown.

But her main focus, just like Richardson before her, is the meat. Hammett is vigilant not to deviate from her grandfather’s standard, from the meat’s tenderness to the flavor of the hickory and special seasoning.

Even though “tasting the product” is her favorite part of the job, Hammett doesn’t have a usual order. She works her way meticulously through the menu, making sure that iconic taste hasn’t changed. That’s thanks to Richardson himself, who trained Hammett on every job in the restaurant. 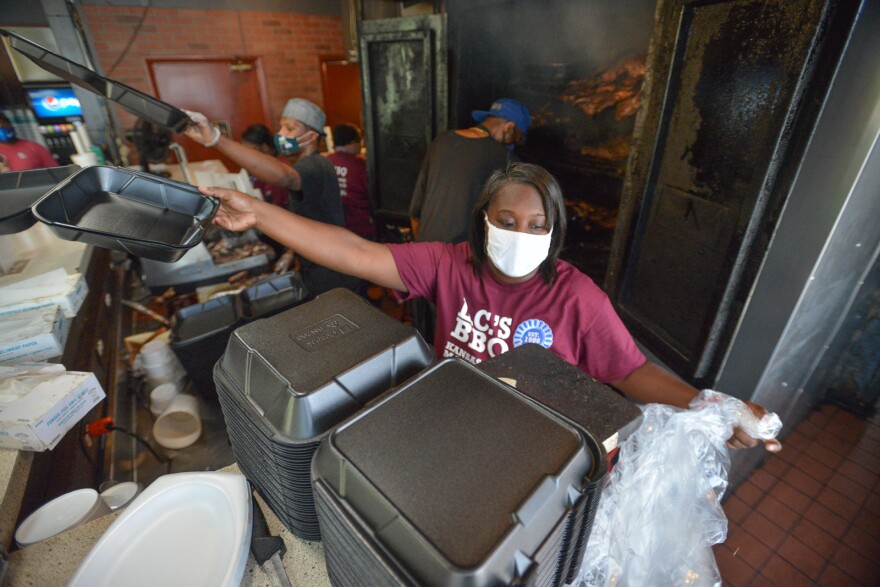 LC Richardson made sure his granddaughter could do every job in his restaurant. Now, she has a hand in just about everything.

The pit now fixed, LC’s once again hums with happy customers. From their side of the counter, things appear unchanged.

As Hammett sees it, everything at LC’s—including the bubbly black husk of caramelized fat edging those famous burnt ends—comes back to the fire in that pit. You can’t let the flames go out, but you can’t let them rage either, or they’ll burn the meat they’re meant to tender.

Three decades into her own barbecue career, though, Hammett has this down to a science. She starts with the smaller pieces of hickory that catch fire fastest, then throws on the bigger logs.

“I’m envisioning in my head how much meat I have to put on, because that dictates how the fire is going to go,” Hammett says. “It’s very important to be able to keep the fire going.”

February is short but sweet. This month, we share our picks for the city’s best bonbons and a lot of other unique sweets that are baked, dipped and drizzled to perfection. By Dawnya Bartsch, Martin … END_OF_DOCUMENT_TOKEN_TO_BE_REPLACED

Photo by Caleb Condit and Rebecca Norden It’s Valentine’s Day month, but fancy chocolate deserves to be enjoyed year-round. We visited chocolatiers around the … END_OF_DOCUMENT_TOKEN_TO_BE_REPLACED

Posted on December 1, 2022 Overland Park now has more access to information about its Police Department than ever, thanks to a library of online transparency-focused … END_OF_DOCUMENT_TOKEN_TO_BE_REPLACED