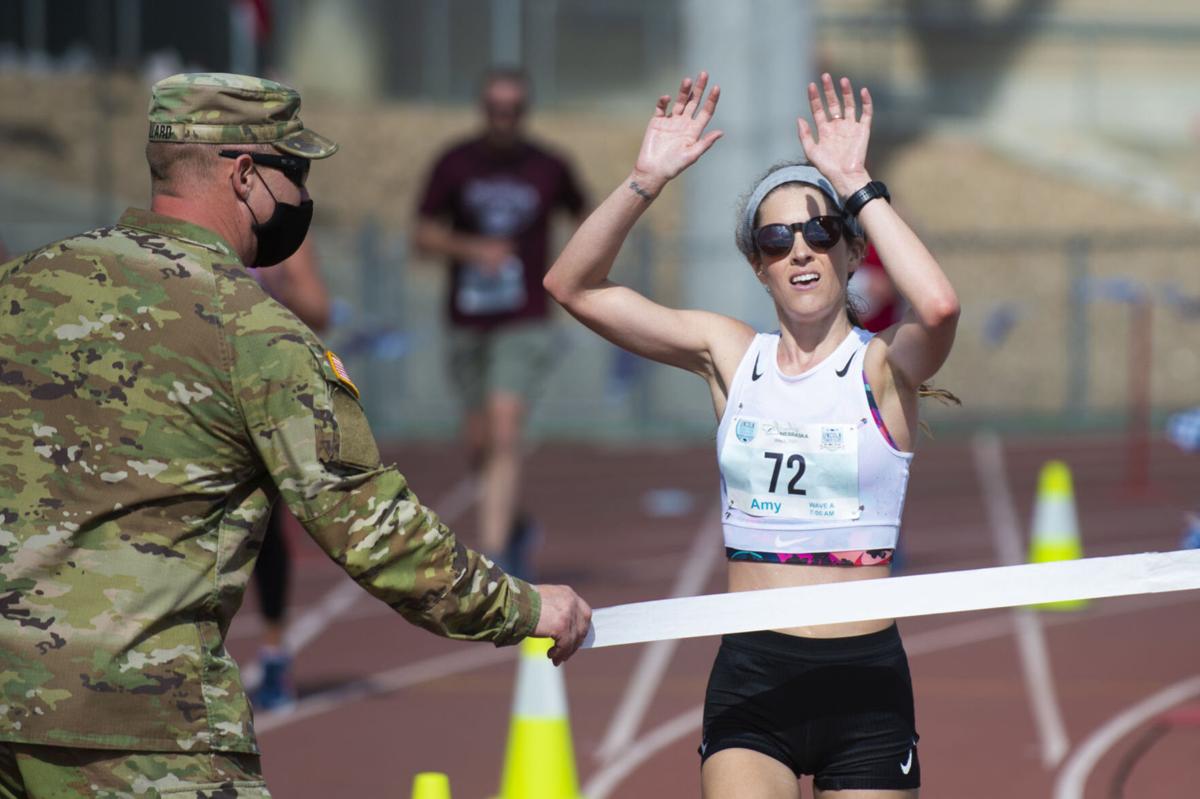 Women’s marathon winner Amy Delong, a 29-year-old from Denver, raises her arms in victory as she crosses the finish line at Ed Weir Stadium on Sunday. 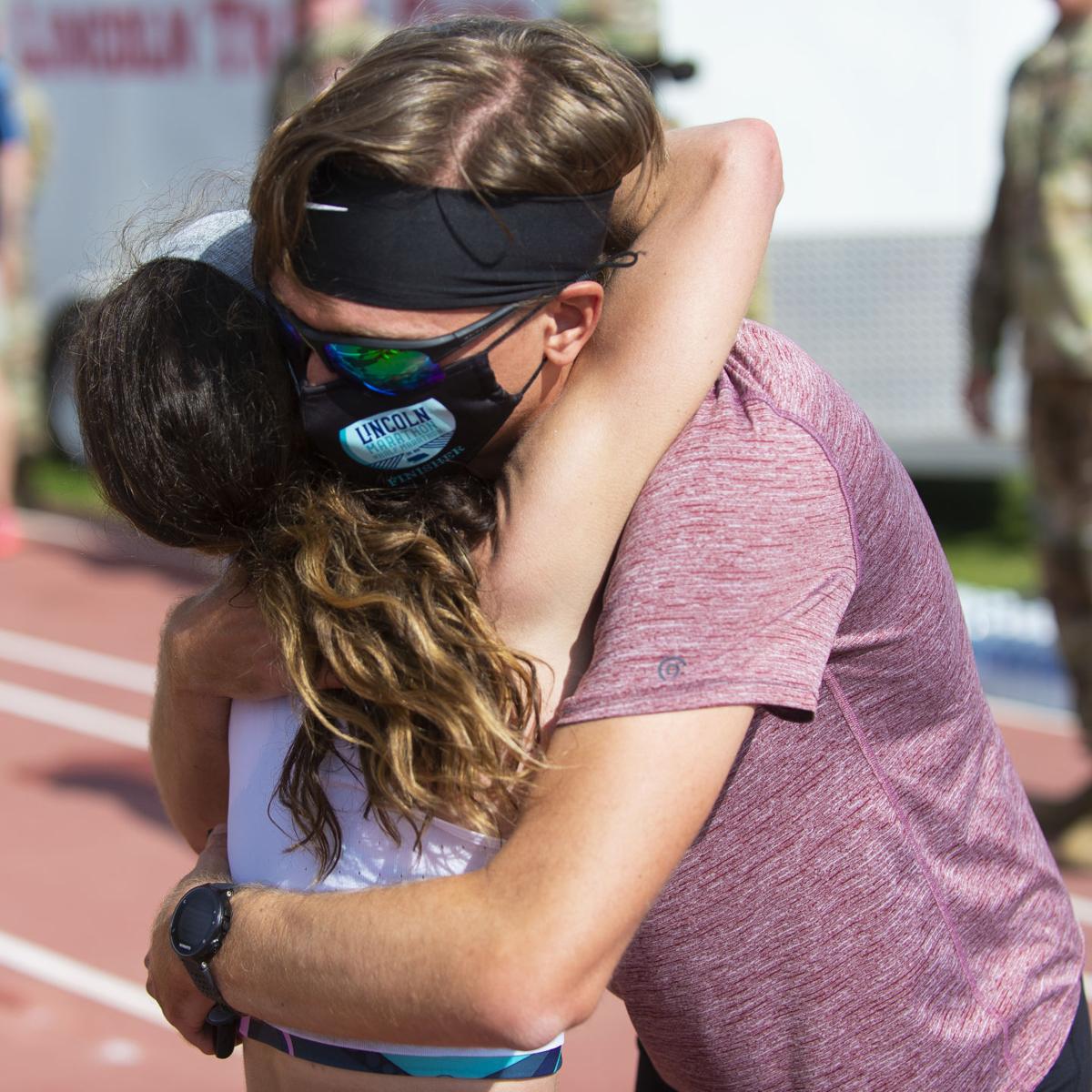 Women’s marathon winner Amy Delong (left), gets a hug from her boyfriend Mason Frank after she crossed the finish line at Ed Weir Stadium with a final time of 3:01:36 during the Lincoln Marathon on Sunday.

Amy DeLong’s art classes were just down the road nearly seven years ago at Nebraska. She created a picturesque ending to her Lincoln Marathon on Sunday.

The Omaha native who now resides in Denver finished the race at Ed Weir Stadium in 3 hours, 1 minute and 36 seconds, to capture her first marathon victory.

“I love this marathon,” DeLong said. “I went to school here, I grew up here and it feels really special to win it today.”

It was just her second Lincoln Marathon and third marathon overall.

After a late injury in 2019 hampered her from finding new venues, competition grew scarce in 2020 with the COVID pandemic. But DeLong never quit.

“It was a fun year to just test fitness and to mentally just grow,” DeLong said. “I’ve done a lot of time trials on the road and at altitude and just to see what I could do when alone. I think that pays off when you get back into a race.”

DeLong, who ran track and graduated from Omaha Skutt, described herself as a leisure runner who picked it back up when she turned 24.

There was nothing leisurely about her finish topping her personal best finish by nearly 25 minutes.

DeLong runs with her boyfriend Mason Frank, who ran the half-marathon Sunday and has competed at the last U.S. Olympic marathon trials in 2016 and 2020.

“I’ve been injured frequently over the last year,” Frank said. “I bought a bike for when she’s doing workouts. She’s been kind of the focal point when I’ve been trying to rehab and getting back to my running.

“Her workouts usually work out with my easier days. We kind of plan it out, look at our calendars and she will say, ‘I want to work out here.’ This has been her goal to do well here.”

Weather played a major factor in how the race was run Sunday, with cloud cover early that turned into a scorcher for DeLong at the 13-mile mark. Then the wind fluctuated nearly every 20 minutes.

“This is my stress reliever and gets me through the hard works weeks. I just love it and it’s the most I feel in sync with my body and my mind. It’s just a really fun hobby to have.”

Frank finished his half marathon run (1:08:40) and made sure to run right back to the finish line when DeLong was on the back half of the course.

“I think it’s pretty incredible,” the Adel, Iowa, native said. “(DeLong) was hoping to break three (hours). We kind of looked at the results the last couple of years and she knew she was going to be in the mix of the top three or top five based off of what previous runners had done here.

Elisa and Marjain Breitenbach “hate politics.” The owners of Doughboys Donuts in Raytown wake up at 1 am to start their day so they can be stocked with Bismarks and red velvet cake doughnuts when they … END_OF_DOCUMENT_TOKEN_TO_BE_REPLACED

Legends of Hip Hop | Friday, October 15 Finally rescheduled from its early pandemic cancelation, this tour will take you straight back to that drank-fueled, micro-golden era of Gulf Coast … END_OF_DOCUMENT_TOKEN_TO_BE_REPLACED

After temporarily closing like many restaurants during the pandemic, Lazia is set to relight its candelabras and little pink neon sign on Friday, November 12. The restaurant’s location in a hotel … END_OF_DOCUMENT_TOKEN_TO_BE_REPLACED

When Casey Lueck opened his business on the main drag in Grandview, he intentionally left the word “barbecue” off the sign. “I was kind of afraid to put barbecue on the sign just because it’s such a … END_OF_DOCUMENT_TOKEN_TO_BE_REPLACED