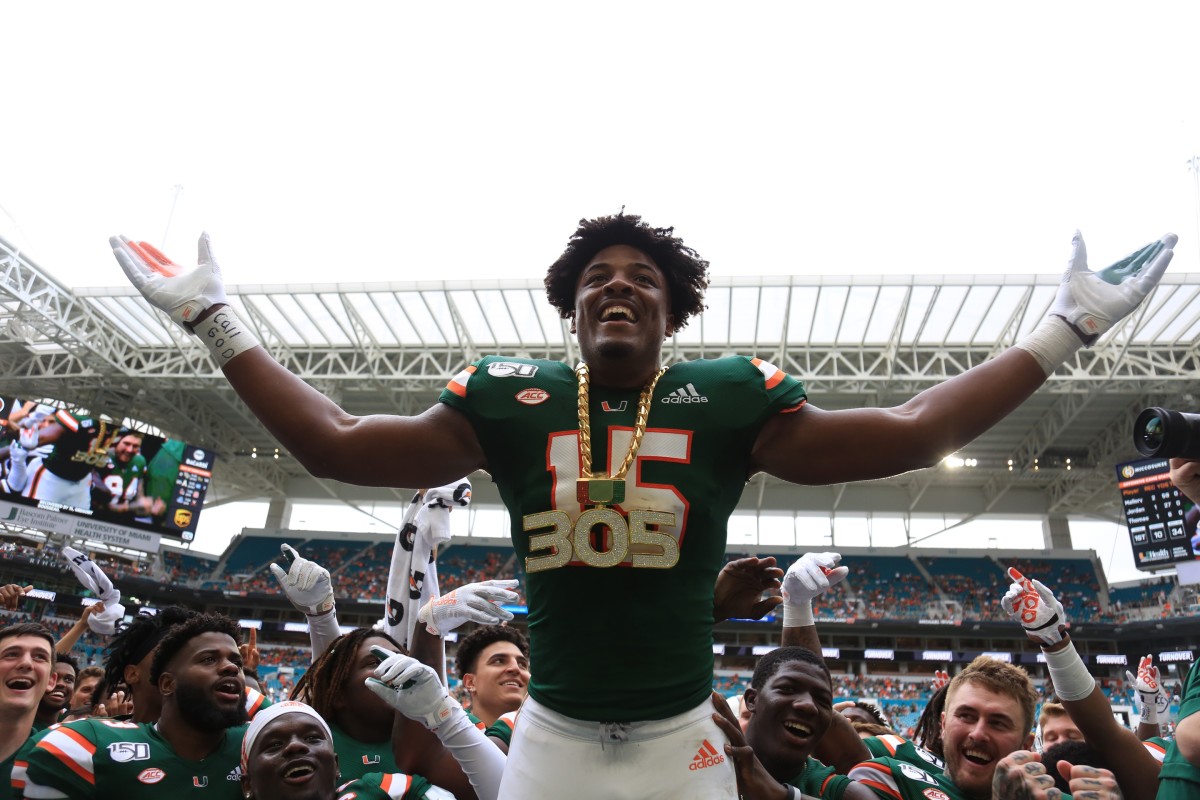 Finally! After months of pre-draft conversations, the 2021 NFL Draft is here. Just days ago, we were still expecting the Kansas City Chiefs to make their first selection on Thursday with the 31st overall pick before they sent the pick to the Baltimore Ravens to acquire Pro Bowl tackle Orlando Brown Jr. To commemorate this beautiful occasion, I have done three mock drafts and I will combine them into one official mock draft. Let’s get this rolling!

If you mocked Gregory Rousseau to the Chiefs a year ago, you would have been looked at like you were crazy. At that time, Rousseau was a near-consensus top-10 prospect and the clear number one edge defender in all of the mock drafts. He finished the 2019 season with 16 sacks and a 16.4% pressure rate, per Pro Football Focus (PFF), putting up outstanding production numbers. However, with Rousseau opting out of the 2020 season, there seemed to be some more critical inspection that crept up and he started to plummet down the board for many. I don’t think he will drop quite this far, but if he does, the Chiefs should jump all over him at 58. He has been highly productive, he has the size that defensive coordinator Steve Spagnuolo has looked for with his edge defenders and he could easily be the next great pass-rushing piece needed to cement the Chiefs’ defense.

Even if the Chiefs can bring back Bashaud Breeland, I would really like this pick. Tyson Campbell is quite an athlete, with a 4.4 40-yard dash time, and he has shown his coverage talents with the Georgia Bulldogs, allowing 0.97 yards per coverage snap over his three seasons there. Campbell is a great, reliable tackler, with 80+ PFF grades and missed tackle rates below 5.5% in both of his seasons with 25+ tackle opportunities. He also has the length to be an outside guy, where he’d most likely step in for the Chiefs.

If you’re looking to potentially upgrade on Austin Blythe or at least look for a future replacement for him at center, then here you go. Trey Hill is a big, strong dude who has done well both in pass- and run-blocking, receiving 70+ grades from PFF in both five of six times between the two areas in his three seasons starting for Georgia. Hill isn’t as agile as a player like former Chiefs center Mitch Morse, but he can be a guy who fights off bull rushes from the big guys and can hopefully be moving those big guys back himself.

I honestly have no idea where Josh Palmer is going. I see some places putting him as a third-round guy and some places putting him as a sixth-round guy. Personally, I would be happy taking Palmer with even the 144th pick, but if he can make it 175, which seems plausible, I am pulling the trigger if wide receiver still somehow hasn’t been addressed. Palmer seems like a great fit for KC and it’s wild to say because his college numbers have been quite pedestrian, as he hasn’t put up 500 yards or five touchdowns in any of his college seasons. The Chiefs can find a way, though. Palmer is a talent who could slot next to Tyreek Hill, Travis Kelce and Demarcus Robinson and contribute quickly.

Zach Davidson is really starting to gain some traction late in draft season. I have been seeing Davidson clips on Twitter quite a bit recently and I can see the excitement, as he has a crazy catch radius and he still has plenty of room to grow. Following two seasons as a punter, Davidson finished 2019 in the top 10 in the NCAA in receiving touchdowns (15) and yards per reception (22.4). That’s right, he was a punter! He also still punted in 2019, including kicking a 67-yard bomb. Do you not want your backup tight end to be able to kick a football almost as far as Patrick Mahomes can throw it?

Jones had a really solid career at Middle Tennessee, but he only played at right tackle. However, it seems a near-certainty he will move to guard and that sounds like a plan to me. Jones is a big guy who plays like a big guy and he showed it in 2020, not allowing a sack or hit and only allowing five pressures, astounding numbers at right tackle. I wouldn’t mind Jones competing with Nick Allegretti for Joe Thuney’s backup or taking a step back and taking a “redshirt” year.

How does this mock draft set the Chiefs up for the future?

I think this really does what the Chiefs need in this draft. It brings some high-ceiling prospects who fit the system to just about every “weak” spot on the roster, and the Chiefs don’t really need any of these guys starting on day one if they aren’t ready. They can just sit back and develop. I’d like to see Rousseau start early on if he lands in KC and I think Campbell and Palmer ought to start as well, but the other guys should be backups or could even take an off-year if needed. It’s also just nice to know this team is already a surefire Super Bowl contender before this draft and with these holes, so there isn’t too much pressure on these draft picks to show their stuff right out of the gates.

{{featured_button_text}} The Lincoln-Lancaster County Health Department reported three new cases of COVID-19 on Sunday, bringing the community total to 31,251.The number of deaths in the county … END_OF_DOCUMENT_TOKEN_TO_BE_REPLACED

{{featured_button_text}} Father Joseph Bernardo (left) speaks with Dr. Anuradha Tunuguntla, an interventional cardiologist, about the treatment he received from her at CHI Health … END_OF_DOCUMENT_TOKEN_TO_BE_REPLACED