A warm, “muggly” day for southeast Nebraska.  Temperatures have risen to their highest levels in nearly two weeks.  The heat index has climbed to the 100°s today.  Lincoln had a heat index of 107°, the third highest level this year.  Looks like the heat and humidity will stick around for a few more days before relief comes for the end of the week.

Mostly clear skies tonight.  It will remain mild with lows in the upper 60°s to lower 70°s. 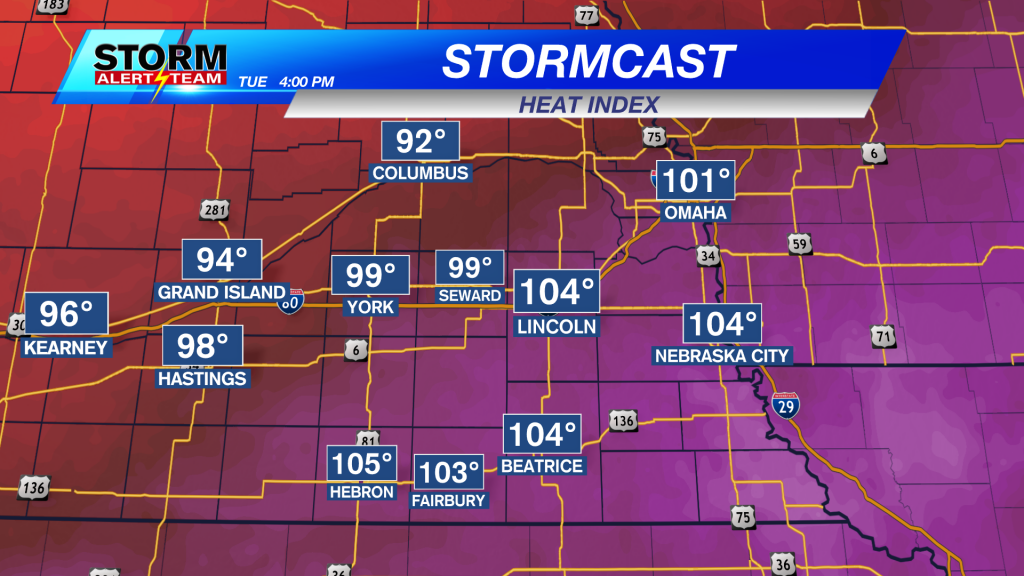 Temperatures will return to the lower 90°s Tuesday afternoon.  Dew points are projected to be in the lower 70°s, so it is going to feel very “muggly”.  Peak heat indices will once again return to the 100°s, mainly along and south of I-80.  Because of this, the National Weather Service has extended the Heat Advisory until 9 p.m. Tuesday.

Another Heat Advisory will likely be needed for Wednesday and Thursday as air temperatures are projected to top out in the middle 90°s and dew points in the lower to middle 70°s.  Heat indices will likely be over 100° area wide, and some locations will be 105°+.

Relief is expected to arrive Friday as high temperatures fall back to the 80°s and dew points fall through the 60°s and possibly in to the upper 50°s.

The pandemic threw a wrench in many people’s holiday shopping. What used to be trips to stores and markets with the family to find the perfect gift turned into Amazon wish lists and online gift cards. … END_OF_DOCUMENT_TOKEN_TO_BE_REPLACED

Rhonda LeValdo travels from Lawrence to Kansas City for every Chiefs home game, but she’s never actually been inside Arrowhead Stadium. Instead, she stands by a bus stop at the corner of Red Coat Lane … END_OF_DOCUMENT_TOKEN_TO_BE_REPLACED

For eighty years, a story has remained buried under the tales of the great men of Kansas City jazz, from Count Basie to Charlie Parker. Living and playing alongside them was another legend, pianist … END_OF_DOCUMENT_TOKEN_TO_BE_REPLACED