With the election now less than two weeks away, surveys show that Americans are more divided than ever on the culture war issues of abortion, race, guns and the power of government. These issues are also affecting the race for the open U.S. Senate seat in Kansas. Jim McLean has more.

Supporters of Republican candidate Roger Marshall fear a wave of Democratic victories will trigger radical changes in the nation’s economy and culture; that capitalism will give way to socialism, undocumented immigrants will stream across the U.S.-Mexico border and individual liberties will be threatened.

Voters who favor Democratic candidate Barbara Bollier talk with similar alarm about what might happen if President Donald Trump wins a second term and Republicans keep their Senate majority — further erosion of democratic institutions and dire consequences for failing to act on climate change and long-neglected racial issues.

“No other Western democracy is remotely as polarized as America,” said Mugambi Jouet, an assistant law professor at Canada’s McGill University and author of the book, “Exceptional America: What Divides Americans From the World and From Each Other.”

A Democrat hasn’t won a U.S. Senate race in Kansas since the Great Depression, but several recent polls suggest this year’s contest could be close.

Marshall, a two-term congressman from western Kansas, is urging GOP voters to close ranks behind him, warning them that the Kansas race could determine whether Republicans keep their Senate majority.

At an early October event in El Dorado, he rallied his base by ticking through a list of “radical” changes that he believes Democrats would make if given the opportunity.

Continuing down a list of hot-button issues, he said they also want to “take away our Second Amendment” and lift all restrictions on late-term abortions.

“But I’m going up there to stop all that from happening,” he said.

Bollier, a state senator from the Kansas City suburbs who switched parties in 2018, is instead hoping to capitalize on voter frustration with Washington, D.C., and promising to bridge the partisan divide.

“I’m not interested in the big political fights that get us nowhere,” Bollier said in a speech after winning the Democratic nomination in August. “I’m going to roll up my sleeves, find partners across the aisle … and simply find ways to get things done.”

That’s easier said than done given that much of what she supports — expanding the Affordable Care Act and making changes to immigration policy and police departments — will likely encounter stiff opposition from Republicans.

The vast majority of Republicans and Democrats, 81% of respondents in both parties, have unfavorable views of the other side, according to a 2017 Pew report. That same survey showed Americans were increasingly less likely to interact with people who held different political views or to seek out information that challenged their beliefs.

Entrenched mindsets tied to the principles of individual liberty and religious freedom are contributing factors, said Jouet, the author of the book on polarization. They reinforce what he says is an anti-intellectual undercurrent that flows through American politics, which in recent decades has become stronger with the growth of Christian fundamentalism.

“Religion plays a much more important role in American politics than in other western democracies,” he said.

About 40 percent of Americans self-identify as evangelicals, according to a 2018 Gallup Poll. 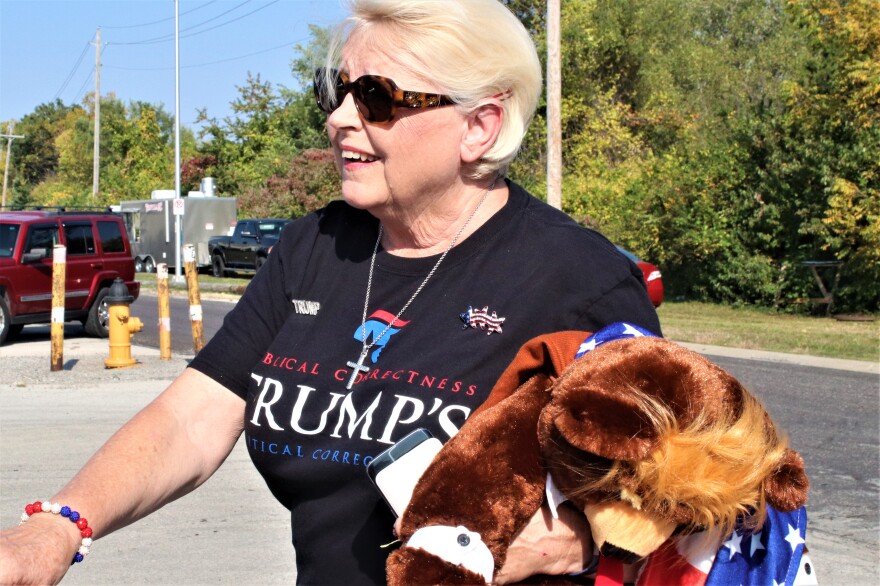 Hal Neukirch stood out at the Republican rally in El Dorado. Wearing a bright red “Kansas for Trump” hat, the retired aerospace worker said he’s backing the president even though it’s cost him friends — including one he’s known for 50 years — because he believes a Trump defeat would trigger “a massive swing to … socialism.”

“Some people have their heads in the sand to think that we wouldn’t go that way,” he said, “but I truly believe we will.”

At a GOP tour stop in Overland Park, Marian Stevens said she supports Trump because God chose him to “save this country.” His defeat, she said, would trigger the “end times”

“It would mean this country is asking to be removed from God’s grace and he would take his arms from around us,” Stevens said.

Democrats, independents and a smattering of moderate Republicans at a Bollier rally in Salina had different concerns if Trump is re-elected and Democrats don’t gain enough power in Congress to check him.

“I think our democracy is on the line,” said Dee Williamston, a district leader for the United Methodist Church in Kansas. “Hands down, this is the most important election in the 21st century.”

Williamston is Black, and pushed Bollier on whether she supports the Black Lives Matter movement and efforts to change policing. And overall, Williamston said, if Trump wins a second term, she believes there would be further attacks on voting rights and policies aimed at ending racial inequities. 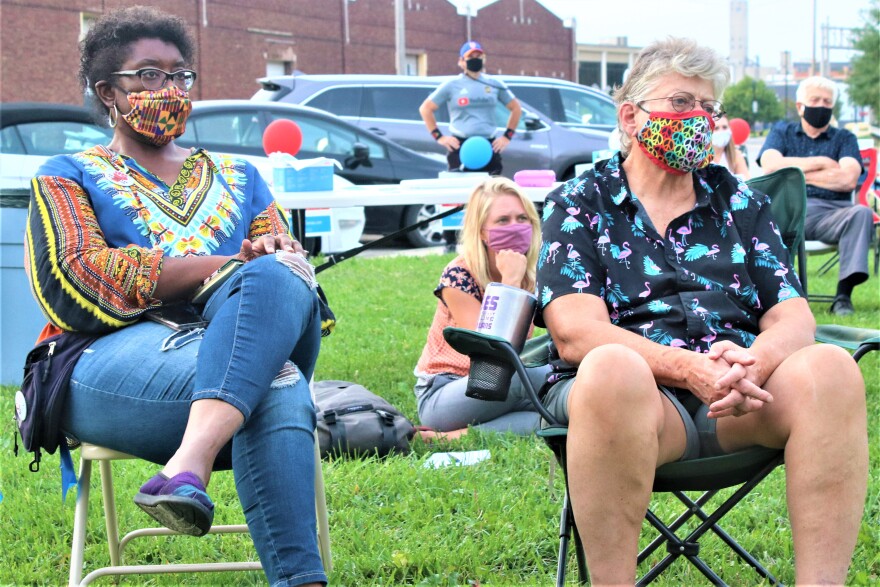 “They have their head in the sand when it comes to issues around race, power and privilege,” Williamston said, referring to the president and Republicans in Congress.

But Marshall, whose father was the police chief of El Dorado for 25 years, decries “the violence” that he said Black Lives Matter protests triggered in some U.S. cities. In an interview, he said systemic racism and police violence against people of color might be a problem in some parts of the country, but not in Kansas.

There’s yet another divisive issue, brought back into the forefront with the U.S. Supreme Court nomination hearings, and that’s abortion. Pam McIntyre, a Bollier supporter from Salina, is concerned the Senate race could turn on the issue.

“I have some friends that are literally one-issue voters,” McIntyre said. “I try so desperately to get them to see that pro-life is so much more than just birthing a baby.”

Marshall, who is a retired obstetrician, and Republican political action committees are attacking Bollier in campaign ads for voting against a 2015 measure to ban a relatively rare procedure known as a dilation and evacuation abortion.

That measure was struck down in 2019 by the Kansas Supreme Court when it ruled that Kansans have a constitutional right to an abortion. And the Kansas House narrowly rejected a proposed amendment in the 2020 session that would have added language Constitution stating that there is no state right to abortion.

Bollier has consistently voted to protect Kansans’ abortion rights, saying women should be free to make their own choices in consultation with their doctors. A retired anesthesiologist, she also said it would have been malpractice for her to support an unconstitutional bill.

Perhaps I’ve had cachete tacos in Kansas City before and not realized it. They go by a couple other names—cabeza, barbacoa. In Spanish, cachete means “beef cheeks” (one part of the cabeza) and it is … END_OF_DOCUMENT_TOKEN_TO_BE_REPLACED

Posted on January 25, 2022 City Council has approved a new pilot program allowing many Overland Park residents to raise chickens. Under the program, residents will be able to … END_OF_DOCUMENT_TOKEN_TO_BE_REPLACED

El Torreon Ballroom was born as a Jazz Age ballroom. In the seventies, the building became a counterculture hub as The Cowtown Ballroom. New owners have big plans to give it a new life. Twice in its … END_OF_DOCUMENT_TOKEN_TO_BE_REPLACED

In Kansas City Actors Theatre’s The Pests, all Eraste wants to do is meet up with his beloved. And all anybody else wants to do is detain him.  The play, which runs through January 30 at the City … END_OF_DOCUMENT_TOKEN_TO_BE_REPLACED