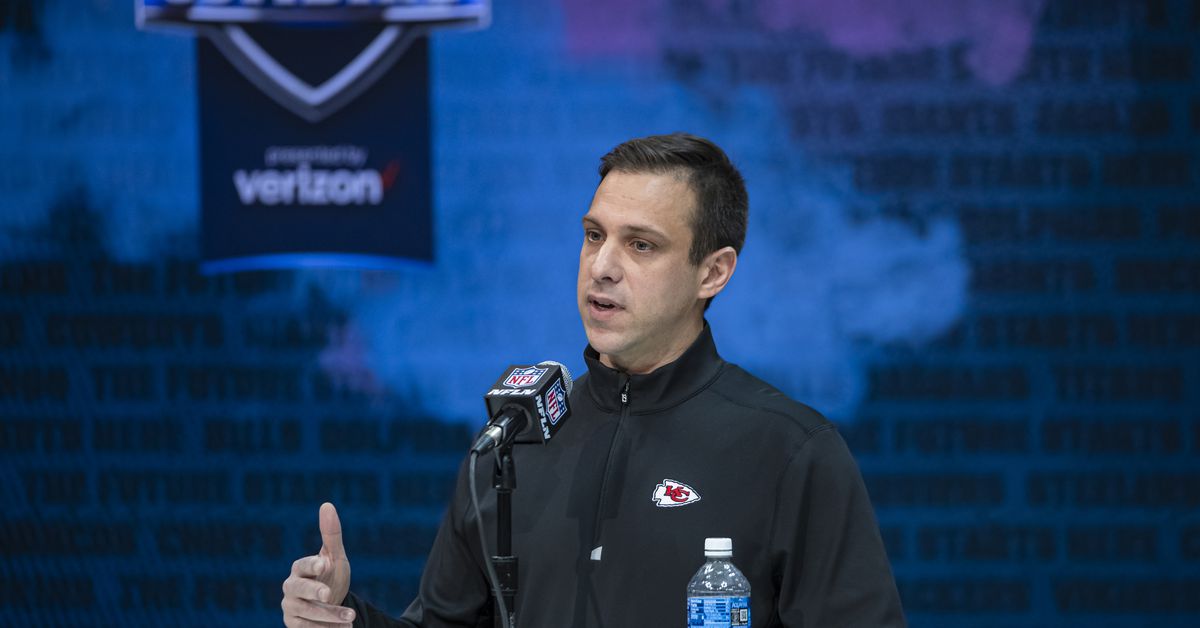 On the Friday episode of the Arrowhead Pride Laboratory, we went through a “Doomsday Draft,” a less-than-ideal scenario for the Kansas City Chiefs.

(Note: This doesn’t mean we necessarily dislike the players selected — but perhaps don’t love the value of the pick and the totality of the draft. Sometimes, the whole picture of a complete draft can make other picks make more sense — given the full perspective.)

Here’s the four-round mock draft that we came up with:

In this scenario, tackles fly off the board — and so do the pass rushers and cornerbacks (we did count picks, and it could certainly happen). The Chiefs are stuck between reaching for an offensive tackle with the arm length requirements that Andy Reid has (Stone Forsythe, Spencer Brown) or addressing another position.

What’s a position the Chiefs might address that we wouldn’t be thrilled with? Linebacker.

Collins is one of the best coverage backers in this draft but also possesses a unique, versatile skill set. Steve Spagnuolo prefers plays that are better against the run than him, but he’s also seen what a great coverage linebacker can do for a defense in the last two Super Bowls. Collins could develop some rush ability and present himself as a chess piece.

Collins is a fine player, but this is not the greatest position of need, and we wouldn’t love the idea of going with a linebacker.

The Chiefs see Forsythe come off the board in the 40s and aggressively move up to acquire the last tackle of their tier in Brown. They surrender pick 63 and 94 to move up to 50.

Coaches are likely drooling over Brown’s potential after testing through the roof at his pro day. He showed elite athleticism at over 6 feet 8 inches. There’s promise for sure, but he’s also only played right tackle in his career at a lower collegiate level than some of his counterparts.

He’s a project, and I wouldn’t feel comfortable getting him accustomed to the other side of the offensive line while trying to protect Patrick Mahomes’ blindside. Brown is an older prospect (redshirt senior) and those types of players aren’t normally developmental. Chiefs coaches will love him, and coaches play a significant role on the Chiefs’ board quite often. They’ll believe they can get the most out of a player like Brown.

The Chiefs are done on day two early after a trade-up and have to wait to address the EDGE position until day three. Kaindoh is another special athletic profile that hasn’t put it all together yet — and there are questions if he ever will. He has the requisite size and length of a Spagnuolo edge but still has a way to go to become a consistent contributor at the next level. This again is a pick that in which the coaching staff believes it can help a player reach his ceiling. The pick from a value perspective is relatively fine, but the first three picks of this draft present a lot of question marks.

The first three picks present a lot of athletic upside, but the compensatory pick in round four does not. Surratt fits as a receiver who can operate outside the numbers and win at the catch point but doesn’t have a great athletic profile — running a 4.7 40-yard dash at his pro day. What he does provide is a big-bodied target that can line up on the line of scrimmage against press — a type the Chiefs are likely looking for in this draft.

I’d have to be sold pretty hard on the totality of this draft in the post-pick press conferences. The Chiefs still got better in this scenario — it’s hard not to when you have a full complement of picks. The question is will these players reach their potential and how long would it take them to achieve it?

My confidence level isn’t as high — but if a scenario like this plays out, the organization believes in its ability to get these players to reach their ceilings.

How to listen to Arrowhead Pride podcasts

Arrowhead Pride podcasts are available on Amazon Alexa, Apple, Google, Spotify and Stitcher. Please rate and review, as this helps us grow AP Radio to reach more Chiefs fans all over the world!

Make sure you subscribe so you don’t miss an episode.

The 2021 edition of the KC Draft Guide is now available!

February is short but sweet. This month, we share our picks for the city’s best bonbons and a lot of other unique sweets that are baked, dipped and drizzled to perfection. By Dawnya Bartsch, Martin … END_OF_DOCUMENT_TOKEN_TO_BE_REPLACED

Photo by Caleb Condit and Rebecca Norden It’s Valentine’s Day month, but fancy chocolate deserves to be enjoyed year-round. We visited chocolatiers around the … END_OF_DOCUMENT_TOKEN_TO_BE_REPLACED

Posted on December 1, 2022 Overland Park now has more access to information about its Police Department than ever, thanks to a library of online transparency-focused … END_OF_DOCUMENT_TOKEN_TO_BE_REPLACED

The annual Beard Awards semifinalists nominations were just released and Kansas City’s food and drink scene has something to celebrate. The KC area has seven semifinalists by our count, including two … END_OF_DOCUMENT_TOKEN_TO_BE_REPLACED