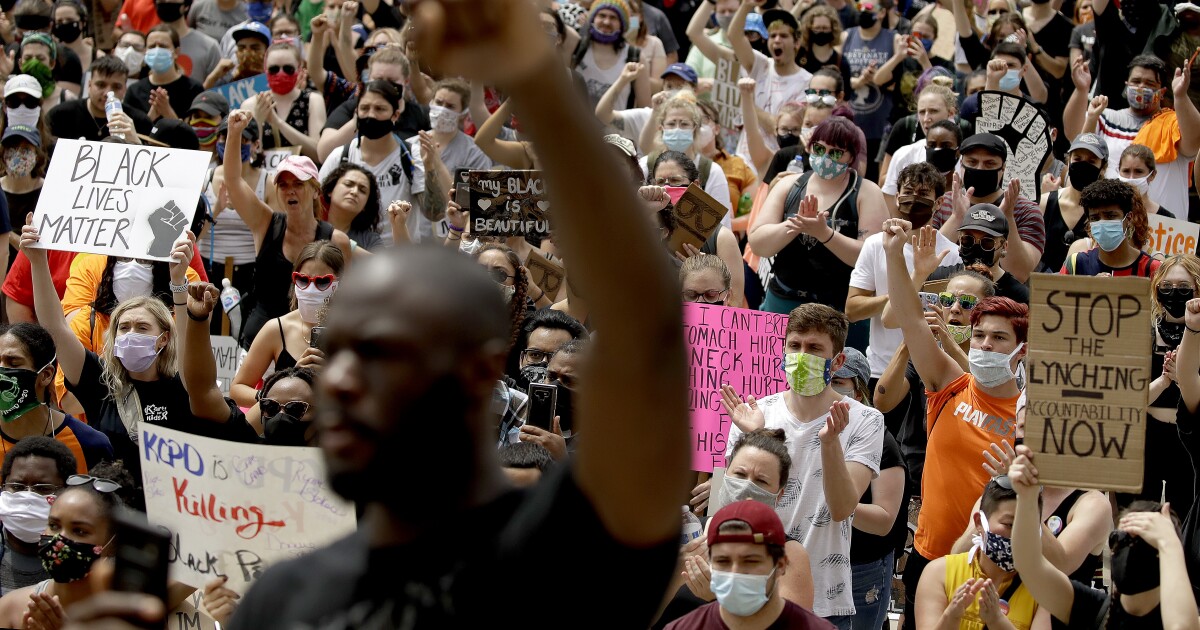 Images of George Floyd in his final moments moved Kansas City, our nation and our world in ways we are just beginning to comprehend.

Looking back on the protests at Mill Creek Park in the days following Floyd’s murder, 41 Action News captured frustration, desperation, heartache and hope. People from every corner of our community experienced the 2020 protests from a unique vantage point. This project is an emotional look at a flash point through all the prisms that bring us our greatest challenges and present our most significant opportunities to grow and heal.

Meet the protestors who rose up to call out a biased and often inequitable system, the officers charged with protecting and serving, the faith leaders who sought to be guided through their moral compasses, the activists trying to push public policy, business owners challenging themselves and their comfort zones, a child who was pepper sprayed on the front lines, the father fighting for dignity, the small town teen who decided to demonstrate and lead a demonstration for the first time and journalists pushed professionally and personally to capture this moment for today and for the future.

These are the perspectives of a national tragedy felt in a very local way — an examination of the steps to respond and our collective hopes for what Kansas City can become in the years ahead.

Hundreds of people gathered for a peaceful protest, but Kansas City, Missouri, police did call additional officers to the scene shortly after 5:30 p.m. as protesters began to block traffic in the area.

Things shifted Saturday, May 30. KCPD arrested more than 50 people protesting the death of George Floyd on the Country Club Plaza.

According to police, at least 10 people were injured, and a car was set on fire. Several businesses were also vandalized, most with broken windows.

41 Action News shared some images gathered in the early days of the protest.

By June 2, KCPD had what it called “the best night so far.”

There were roughly 15 to 20 arrests, and protestors marched freely along Main Street.

After a weekend of more than 150 arrests, local clergy and pastors came out to pray for the officers and take part in a march from the Nelson-Atkins Museum to Mill Creek Park.

Very few arrests were made, but some protesters still said they did not want unity with the police until changes are made.

KCPD Chief Rick Smith announced the department secured funding for police body cameras, one of the demands local protesters made to the department.

One month after George Floyd’s death, 41 Action News aired a special report highlighting the parallels between the 1968 race riots and the 2020 demonstrations.

KCPD secured funding for body-worn cameras, an idea that originated in 2015 and was tested to some extent in 2016.

Funding had always been a barrier for wider use of the cameras before the protests.

In August 2020, Tarence Maddox filed a lawsuit against KCPD for pepper spraying his teenage daughter in the face at the May 30 protest.

He was also sprayed in a video that quickly went viral, racking up millions of views.

In October 2020, Theresa Taylor filed a lawsuit in U.S. District Court, Western Missouri Division, alleging that a verbal order made by police to arrested protesters to avoid future protests was never rescinded, and has violated her rights moving forward.

The Missouri State Highway Patrol will now investigate all KCPD officer-involved shootings to avoid a conflict of interest.

Additionally, KCPD now has explicit language banning chokeholds, even though there’s never been training for that technique.

By February 2021, the department had drafted a proposal to nix using “less lethal” weapons for crowd control.

In March 2021, a Jackson County grand jury returned the indictment of Nicholas M. McQuillen for one count of misdemeanor assault for spraying Na’Tya Maddox in the face with pepper spray.

In April 2021, KCPD unveiled a new protest policy in response to calls for police reform. It came one day after a jury found former Minneapolis Police Officer Derek Chauvin,guilty of three charges in the murder of George Floyd.

Protests in the Kansas City area continued for weeks.

Thousands of people came to the metro to cry out, with broken hearts — but also with hope the community can rise from this.

Now, as we reflect on the last year, what do you see? Are you listening?

Oktoberfest You won’t go thirsty at Kansas City Bier Company’s annual Oktoberfest, which returns to Crown Center on October 7 and 8. Among the offerings are traditional lagers in the style of Munich … END_OF_DOCUMENT_TOKEN_TO_BE_REPLACED

When you think about wine, do you picture Missouri? If not, a new documentary by TasteMAKERS hopes to change your mind. “I fell in love with Missouri wine early on,” says Cat Neville, the … END_OF_DOCUMENT_TOKEN_TO_BE_REPLACED

Photo by staff. Ashton Bethel started making home decor during the pandemic as a hobby. Now, she has her own business: High Noon Pottery (@highnoonpottery). Typically, Bethel … END_OF_DOCUMENT_TOKEN_TO_BE_REPLACED

You can never tell the secrets a tortilla holds. I am not referring to what this deceptively plain wrapper carries between its folds: the al pastor licked with heat and pineapple or some impossibly … END_OF_DOCUMENT_TOKEN_TO_BE_REPLACED

Here are nine great things to do in Kansas City the weekend of September 29 to October 2, including the biggest barbecue in the world, a mashup of Oktoberfest and Dia de los Muertos and the Violent … END_OF_DOCUMENT_TOKEN_TO_BE_REPLACED