The St. Louis Blues enter the offseason with $17.3M in cap space and a handful of restricted free agents they’ll need to sign. With Vladimir Tarasenko’s trade request on the minds of fans and the front office alike, replacing Tarasenko’s production should be the top priority of the team. Last season, the Blues possessed the 13th best offense in the NHL, scoring 169 goals in 56 games. With the sixth-best power play in the NHL, the Blues found great success with their special teams — a result they’ll hope to replicate in 2021-22.

Despite this, the 13th best offense in the NHL was reduced to a whimper in the 2021 playoffs, producing just seven goals in four games against the Colorado Avalanche. In order to put the Blues over the top, they’ll need as much help as they can get. Tom Stillman, the owner of the Blues, has openly stated that he’s prepared to spend to the cap ceiling to help bolster the Blues. Stillman believes the window is still open. These seven UFA forwards can help to keep it open for as long as possible:

Saad has been somewhat of a journeyman over the last few seasons, playing with the Columbus Blue Jackets, Chicago Blackhawks, and, most recently, the Colorado Avalanche. He made somewhat of a good situation for himself in Colorado, playing up and down the lineup to inject some extra scoring. While the Blues don’t have any marquee names like Nathan MacKinnon at their disposal, they have plenty of opportunity for a player like Saad.

The Blues will try to re-sign one or both of Mike Hoffman and Jaden Schwartz. Should one of them choose to depart, they’ll need flexibility. Saad happens to solve that problem. The Pittsburgh native primarily played on the Avs’ second power play unit. Saad scored 24 points in 44 games in Colorado, hovering around a 50-point pace. A deal with the Blues would offer the 28-year-old plenty of opportunity to make an impact on both even strength and on the power play.

Yesterday, the Minnesota Wild bought out Parise and Ryan Suter’s contracts, taking on an ugly $14.8 million in dead cap space for three seasons. The now-free agent is far removed from his career-high of 94 points in 2008-09, but he’s still a capable depth forward. Limited usage last season stunted Parise’s point production; despite this, he has scored at anywhere from a 45-55 point pace over the last five seasons prior to 2020-21.

Could Zach Parise be a good fit in St. Louis?Nick Wosika-USA TODAY Sports

Should the Blues choose to move on from Mike Hoffman, they could use Parise as a replacement on the second power play unit. Parise is quite experienced in this regard, having scored 120 career power play goals. In addition, his recent buyout would invite discussions of a potential pay cut — something the Blues could use for increased flexibility and signings during the offseason.

From 1st overall pick to Hart Trophy winner to journeyman player, Hall has had quite the experience in the NHL. After a grueling season with the Sabres that saw him traded to the Bruins, Hall has his eyes set on free agency. While he may still re-sign with Boston, he’ll more than likely keep his options open. That’s where the Blues come in. An opportunity to man the top line alongside Ryan O’Reilly and David Perron would no doubt be an exciting opportunity for Hall, who has yet to win his first Stanley Cup.

With Hall on the roster, the Blues obtain a high-scoring forward who is more than capable of playing a defensive role. Prior to his season with Buffalo, Hall was scoring at an average of 55 points or more. With the right linemates, he could help to replace some of the scoring loss the team will suffer without Tarasenko. He’s a good bounce-back candidate, but, like a few other players on this list, he won’t come cheap.

Tatar is an interesting case among free agent forwards. After ending the 2020-21 season fourth in team scoring for the Montreal Canadiens, Tatar spent the majority of the playoffs on the bench. While some of that can be attributed to a lack of playoff scoring, this puzzling decision left many wondering how differently the Finals could have gone had they given Tatar a chance. If ever there was a player in need of a fresh start, it’s Tomas Tatar.

The flashy forward has everything you could want in a scoring depth forward. He’s able to think quickly, generate scoring chances, and add a little hint of playmaking. Despite this, inconsistencies in the playoffs have been a silver bullet throughout his career. Both the Vegas Golden Knights and Montreal Canadiens sat Tatar in their respective Cup runs. Two schools of thought can emerge from this. On one hand, teams may hesitate to sign Tatar. On the other, the Slovakian forward may look to gamble on himself like Taylor Hall and Tyson Barrie did last season.

Head coach Craig Berube’s system works best with hard-hitting, high-intensity play. Two-time Stanley Cup champion Blake Coleman is the perfect example of such a player. His relentless play style was integral in putting the Tampa Bay Lightning over the top in both of their Cup wins in 2020 and 2021. Coleman isn’t a player signed for his ability to generate power play scoring or his defensive acumen: he’s the kind of player that makes an immediate impact in the playoffs.

If the Blues are looking for killer instinct, Coleman is their guy. He brings tenacity and grit to every game and backs it up with a good eye for goal-scoring. His play style may remind fans of David Backes, albeit at a much smaller scale. Coleman won’t come cheap. After winning two Cups, he will likely have his fair share of suitors. If the Blues hope to net Coleman, they’ll need to be prepared to sign a multi-year deal above market value.

If Coleman is the perfect fit in Berube’s style, Zach Hyman is a dream come true. The soon-to-be free agent will seek a fresh start after yet another first-round exit with the Toronto Maple Leafs. A fan favorite in Toronto, Hyman is beloved for his work ethic and relentless style of play. His coaches and teammates applaud him for never taking a night off. His two-way game and ability to flexibly move about a lineup make him an intriguing free agent. 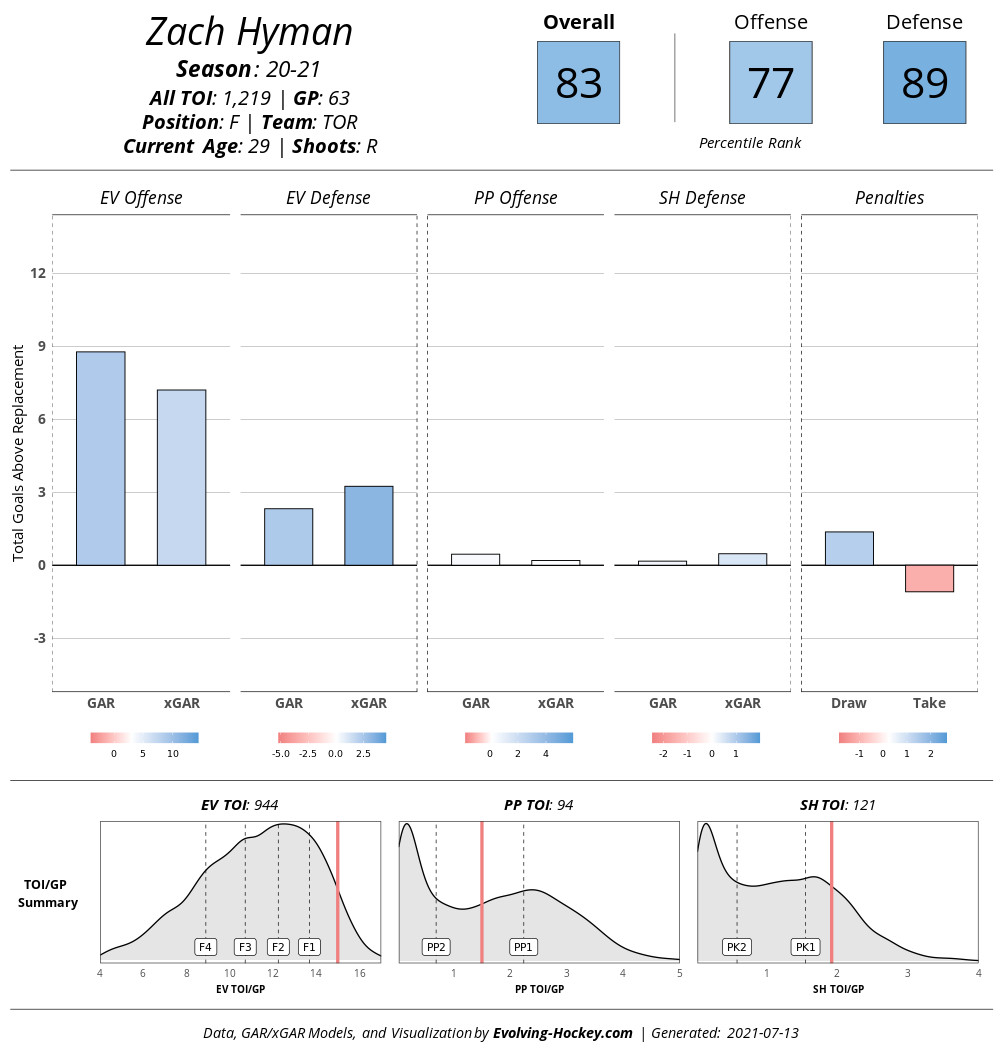 In order to return to the hard-hitting physical play of 2019, the Blues will need players who can work under pressure. Hyman is a player that will receive a lot of attention due to his ability to thrive in high-stress situations. With this in mind, his agent will likely look for the best offer possible. If the Blues can put together a strong enough pitch, they may be able to net a player that will thrive in Berube’s coaching system.

Let’s get one thing clear from the get-go: signing Gabriel Landeskog is, at best, a pipe dream. The Avalanche captain is almost certainly returning to Colorado. Despite this, Blues personnel have made it clear that they’re prepared to go all-in if an opportunity presents itself. If by some miracle Landeskog decides to sign in St. Louis, he’ll bring the physicality the Blues have missed since the departure of Joel Edmunson and Alex Pietrangelo.

Landeskog is a tough, physical forward with a good nose for point production, scoring at a 70-plus point pace over the last three seasons. His pedigree, production, and reputation mean he won’t come cheap. Assuming the Blues go above the asking price, the team can expect to pay anywhere from $8.5-9.5 million over the next seven years. It’s a high price to pay, but one that would extend the Blues’ playoff window and push them further into contender territory.

February is short but sweet. This month, we share our picks for the city’s best bonbons and a lot of other unique sweets that are baked, dipped and drizzled to perfection. By Dawnya Bartsch, Martin … END_OF_DOCUMENT_TOKEN_TO_BE_REPLACED

Photo by Caleb Condit and Rebecca Norden It’s Valentine’s Day month, but fancy chocolate deserves to be enjoyed year-round. We visited chocolatiers around the … END_OF_DOCUMENT_TOKEN_TO_BE_REPLACED

Posted on December 1, 2022 Overland Park now has more access to information about its Police Department than ever, thanks to a library of online transparency-focused … END_OF_DOCUMENT_TOKEN_TO_BE_REPLACED

The annual Beard Awards semifinalists nominations were just released and Kansas City’s food and drink scene has something to celebrate. The KC area has seven semifinalists by our count, including two … END_OF_DOCUMENT_TOKEN_TO_BE_REPLACED