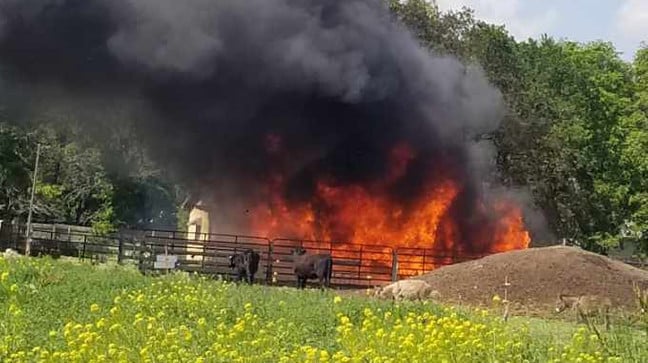 HOLDREGE, Neb. (KHGI) — About 150 rabbits were saved from a barn fire thanks to the owner and the Holdrege Fire Department.

Holdrege Fire responded to the fire Monday afternoon. The flames had engulfed a barn- which doubles as a shop- and a garage.

The owner was home at the time and evacuated most of the farm animals.

“I live the north end of town, and I could see it when I pulled out of the garage. It was heavy black smoke. It was all involved. The guys pulled in and got a couple of lines on the exposures. They saved like 150 rabbits. They put one line on the exposure and one line on the fire and they knocked it down pretty good,” said Holdrege Volunteer Fire Department Assistant Fire Chief Jim Wagner.

Despite rescuing a number of animals, one hen and a couple of chicks were lost to the fire.

If you’re a novice or on a budget, it’s easy to walk away from a wine tasting feeling lost. Local wine shop Underdog is working to make grape education more accessible with Wine by the Class, a … END_OF_DOCUMENT_TOKEN_TO_BE_REPLACED

November 28, 2022 Sports Jeremey Theron Kirby, Photographer In 2018, the Kansas City Chiefs and the Los Angeles Rams played what many consider to be the greatest … END_OF_DOCUMENT_TOKEN_TO_BE_REPLACED

Limitless Brewing beers/Courtesy photo Limitless Brewing was Lenexa’s first brewery and has enjoyed being tucked away in an industrial park just west of I-35. With little signage … END_OF_DOCUMENT_TOKEN_TO_BE_REPLACED

When the Covid lockdown closed the dining room of Lawrence mainstay Ramen Bowls, owner Shantel Grace found herself reconsidering the restaurant industry as a whole. Though she was still open for … END_OF_DOCUMENT_TOKEN_TO_BE_REPLACED

The Annie boots by Tecovas/Photo by Samantha Levi Don’t mosey into the new Tecovas store in Leawood looking for jeans with rhinestones on the pockets. The Texas-based brand, founded … END_OF_DOCUMENT_TOKEN_TO_BE_REPLACED